Wall Street reels, then recovers after invasion of Ukraine 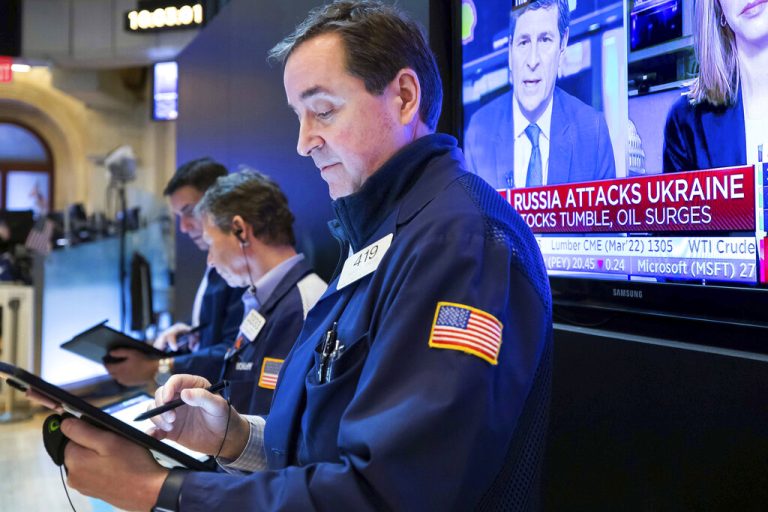 Markets swung wildly Thursday as the world reacted to Russia’s invasion of Ukraine. Stocks in Europe fell sharply, while stocks in the U.S. recovered from early losses after President Joe Biden stopped short of implementing the steepest possible sanctions against Russia.

The S&P 500 rallied 1.5% after erasing an early 2.6% loss, while the Nasdaq staged an even bigger comeback to end with a gain of more than 3%. The heaviest losses hit stocks in Europe, where officials called Russia’s actions a “brutal act of war,” with the German DAX down 4%.

Beyond its tragic human toll, the conflict looked set to send prices even higher at gasoline pumps and grocery stores around the world as prices for oil, wheat and corn soared. Russia and Ukraine are major producers not only of energy but also grains and various other commodities.

Oil prices on both sides of the Atlantic briefly jumped above $100 per barrel to their highest levels since 2014. But they gave back much of their gains after Biden said the sanctions package is “specifically designed to allow energy payments to continue.” Biden also said he wanted to limit the economic pain for Americans.

While Biden described the sanctions as severe, Ukrainian officials had urged the U.S. and West to go further and cut Russia from a crucial financial payments system called SWIFT.

“I think the market certainly could gauge here that sanctions are a little more limited, so there’s not as much transmission of economic difficulties to the rest of the world” from Russia, said Rob Haworth, senior investment strategist at U.S. Bank Wealth Management.

Still, prices rose for everything from heating oil to wheat to gasoline. As with stocks, the movements were sharper in Europe than in the U.S. because its economy is more closely tied to Russia and Ukraine. The spot price in Europe for natural gas jumped more than 50%.

Higher energy and food prices could amplify worries about inflation, which in January hit its hottest level in the United States in a couple generations, and what the Federal Reserve will do in turn to rein it in.

The Fed looks certain to raise rates for the first time since 2018, with the only question being how quickly and how aggressively it will move, starting next month.

In the past, the Fed has sometimes delayed big policy decisions amid uncertainty over geopolitical events such as the Kosovo war and the U.S. invasion of Iraq, according to Goldman Sachs. But economists at the bank say they still expect the Fed to raise rates steadily at its upcoming meetings.

The Ukraine tensions probably just make it less likely the Fed will start the process with a bigger-than-usual increase in rates, something some Fed officials had recently suggested.

“The Fed may become more worried about the impact on economic growth and will probably want to tread more cautiously,” said Kristina Hooper, chief global market strategist at Invesco.

The Fed was already saddled with the delicate task of raising interest rates enough to stamp out high inflation but not so much as to choke the economy into a recession. Strategists at Evercore ISI said that risk still remains, and has become even more complicated by the attack on Ukraine, but that it’s “substantially greater in Europe relative to the US.”

Many investors also said that past global events, such as an invasion, have had only short-term effects on markets that last a few weeks or months.

With expectations falling for a bigger-than-usual increase in rates next month, stocks that tend to benefit the most from low interest rates led the way for indexes to pare their losses through the day. That put the spotlight on big tech stocks, and Amazon, Microsoft and Nvidia all rose 4.5% or more.

That helped the Nasdaq composite swing from a 3.4% loss in the morning to a 3.3% gain by the end of the day, rising 436.10 points to 13,473.59. It was a remarkable turnaround after the Nasdaq was on track during the morning to close 20% below its record high for the first time since the coronavirus collapsed the economy in 2020. Expectations for higher interest rates had been beating down high-growth and tech stocks for weeks.

“We’re seeing some attempt at bottom-fishing here in terms of prices,” said Haworth. Such a “buy-the-dip” ethos has proved profitable in the past, but he said he thinks it’s still “a little early. We just have a lot of uncertainty ahead of us.”

Huge swings also rocked the bond market, where yields initially sank as money moved into investments that looked to offer safer returns than stocks. But yields recovered through the day, and the 10-year Treasury yield was 1.96% in late trading, close to the 1.97% it was at late Wednesday.

The FTSE 100 in London fell 3.9% after Europe awakened to news of explosions in the Ukrainian capital of Kyiv, the major city of Kharkiv and other areas. The CAC 40 in Paris lost 3.8%. Markets in Asia fell nearly 2% or more.

Moscow’s stock exchange briefly suspended trading on all its markets on Thursday morning. After trading resumed, Russian indexes plunged by a third or more.

“How bad could this get? Well, how long is a piece of string, right?” said Jonas Goltermann, senior global markets economist at Capital Economics. “There aren’t that many obvious examples of this type of shock to markets.”