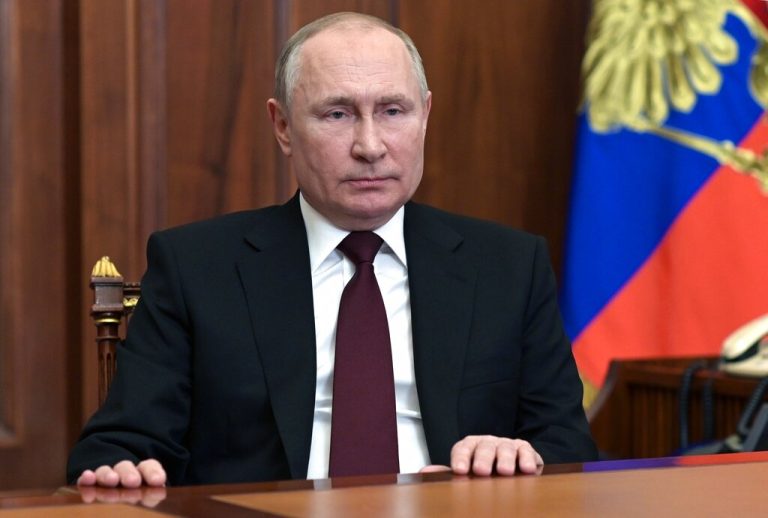 It was a piece of fast-moving political theater in Moscow, a carefully orchestrated political announcement years in the making.

Russian President Vladimir Putin moved quickly on Monday to recognize the independence of separatist regions in eastern Ukraine, framing his show of defiance against the West in a series of nationally televised appearances that came amid Western fears of Russian invasion in Ukraine.

Immediately after the pro-Russian leaders of Ukraine’s separatist “people’s republics” were shown on Russian TV pleading with Putin to acknowledge them as independent states, Putin chaired a Kremlin meeting Monday in which a lineup of senior Russian officials all backed the move.

Hours later, Putin spoke in an hour-long televised address to the nation and then was shown on TV signing the recognition decrees.

The quick move by Putin represents a sharp change of course for the Kremlin, which in the past hoped to use a 2015 peace agreement brokered by France and Germany to have Ukraine’s rebel regions gain more power inside the country to stymie its bid for NATO membership. The strategy didn’t work, because most Ukrainians resented the deal as a betrayal of national interests and its implementation has stalled.

During the Kremlin meeting on Monday, several top officials suggested that Putin wait for several days to recognize the separatist regions to give the West the last chance to persuade Ukraine to abide by its obligation under the deal to offer the rebels a broad self-rule. However, Russian Foreign Minister Sergey Lavrov and other officials argued that it makes no sense to wait, saying that a delay wouldn’t change the situation.

The recognition of the rebel regions came as over 150,000 Russian troops have surrounded Ukraine from three sides in what the U.S. and its allies saw as a sign of an imminent invasion. The U.S. has warned that Moscow could try to create the pretext for attacking Ukraine with false-flag attacks in the volatile rebel east or other similar action.

On Thursday, tensions spiked along the line of contact between Ukrainian forces and Russia-backed separatists in the conflict that erupted in 2014 and has killed over 14,000 people. The rebels have charged than a sharp increase in skirmishes heralded Ukraine’s intention to reclaim control of the region by force. Ukrainian authorities have rejected any such intentions, said they were not responding to increased shelling, and accused the rebels of provocation.

In a fast-moving chain of events, rebel leaders announced massive evacuation in a video that was aired Friday but was recorded two days earlier, according to the data embedded in it — a sign of a pre-arranged plot. They followed up Monday by asking Putin to recognize their regions’ independence, setting stage for the Kremlin’s political show.

In a long ranting address to the nation before the signing ceremony, Putin described Ukraine’s bid to join NATO as an existential threat to Russia, brushing off Western assurances that the alliance doesn’t threaten Russia. He described the prospective deployment of U.S. missiles in Ukraine as a “knife to our throat,” saying that they would be capable of reaching Moscow in just 4-5 minutes.

“Ukraine’s membership in NATO poses a direct threat to Russia’s security,” he said.

The Russian president spent a large part of his address denigrating Ukraine and trying to delegitimize the country as a creation of the Communist rulers of the Soviet Union. He said sarcastically that Ukraine could be named after Soviet founder Vladimir Lenin, who had handed over wide swathes of Russia’s historic lands to it.

Putin mocked Ukraine’s “decommunization” campaign that saw the destruction of Lenin’s monuments, saying: “You want decommunization, it suits us well.”

“We are ready to show you what the real decommunization would mean for Ukraine,” Putin said in a stark warning that appeared to reflect a threat to take back the lands that he felt were “robbed” from Russia by the 1991 collapse of the Soviet Union.

Follow all stories about the crisis in Ukraine at https://apnews.com/hub/russia-ukraine.