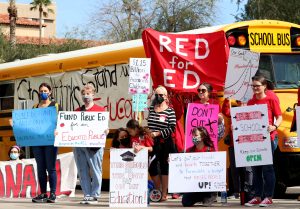 Arizona senators on Monday authorized the override of an education spending cap that would have prevented the disbursement of $1.2 billion already in school coffers.

The 23-6 vote came hours after teachers and parents gathered at the state Capitol to urge state senators to authorize the override of the Aggregate Expenditure Limit, a 1980 amendment to the Arizona Constitution that sets a cap on the amount of money school districts can spend.

“The Senate made the right choice today by joining the House in suspending the school budget cap this year,” State Superintendent of Public Instruction Kathy Hoffman said in a tweet. “And while it shouldn’t have taken this long to fix this issue, I’m grateful disaster was averted.”

Senate Concurrent Resolution 1050 takes effect immediately and does not require the governor’s signature. School districts would have faced drastic budget cuts if the decision hadn’t been made by March 1, and some educators had questioned whether they could afford to finish the school year.

At the rally before the Senate vote, the Arizona Education Association said the Senate wasn’t prioritizing the prevention of these budget cuts.

Chuck Essigs, the director of governmental relations for the Arizona Association of School Business Officials, told Cronkite News last week that Proposition 208 was affecting the Senate’s decision on the spending cap. Passed in 2020 by 52% percent of voters, the proposition increases taxes on incomes over $250,000 to help finance schools.

Some Republican lawmakers and Gov. Doug Ducey oppose raising the money by taxing higher-income people, which delayed the override vote almost to the last minute.

“We have some legislators who didn’t like 208, and they’re still fighting it in court,” Essigs said. “Some are saying, ‘I’m not going to approve exceeding the limit until the courts rule that it is unconstitutional.’”

After a press conference on the lawn, educators and parents marched into the statehouse and demanded a meeting with Sen. J.D. Mesnard, R-Chandler, chair of the Finance Committee, because at the time he still hadn’t made up his mind. He later voted to override the cap.

“These political games are not necessary,” said Marisol Garcia, vice president of the Arizona Education Association. “This is a slippery slope that we all know will lead to further destruction of public schools.”

If the state senate had not taken action, thousands of educators would be at risk of either being furloughed or losing their jobs, and school districts would’ve had to cut their budgets by 16%.

The public supports more money for schools at the ballot box, the teachers pointed out.

“The one thing that holds our communities together is the ability for us to vote in local elections and elect people to help maintain what’s happening in our communities,” Garcia said. “Every time we’ve taken something to the ballot, we’ve won every single time.”

Lupita Almanza, a teacher at Hughes Elementary School in Mesa, emphasized the impact that these budget cuts could have had, especially when schools have just begun conducting in-person classes within the past year.

“I’ve seen in my classroom a lot of growth since the beginning of the year,” Almanza said. “And I just want to finish the year with my kids. in the classroom, so we can continue that growth.”