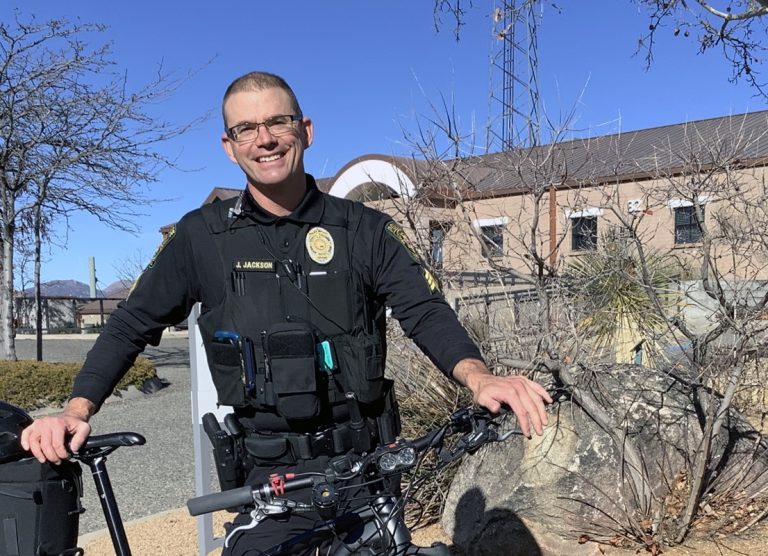 There’s a new sergeant on campus and he’s a familiar face not only at Yavapai College, but in law enforcement and bicycling circles around the state and region.

Jacob “Jake” Jackson was sworn in as Yavapai College Police Sergeant in December. The promotion followed his service initially as a YCPD safety officer and more recently as a sworn officer. It’s not his first supervisorial role, though. He retired from the Prescott Valley Police Department as a sergeant in 2017 after a 22-year policing career highlighted by a variety of assignments and leadership roles for multiple Arizona agencies.

Jake’s attempt at retirement was brief. “My plan was to keep working, but I didn’t know in what role,” he said. “I was happy to go do something else for a while, but it became really apparent that I wanted to be involved in public safety after doing it for so many years.”

Enter current YCPD Chief and then-Sgt. Tyran Payne, a former Prescott Valley police officer whom Jake had supervised, extending his former boss an invitation to apply for a campus safety position. Jake accepted and got the job, recalling, “It was a good opportunity at the time to help the agency with the direction they wanted to go.” That direction was community policing.

“That’s one of my real passions,” Jake said of community policing, which he said encompasses, among other things, community outreach, bicycle patrols and mentoring cadets at the Prescott campus-based Northern Arizona Regional Training Academy. “Mentorship — not only is it one of the best things we can do, but it’s one of the most important things we can do — pass on our knowledge and training to the next generation of police officers.”

A longtime bicycling enthusiast and bicycle patrol instructor, as well as a former semi-professional 10-speed racer, Jake brought bicycle patrols to YC while serving as a safety officer. “It’s one of the best ways, honestly, to patrol a college campus,” he said, explaining that many people are more comfortable with and open to contacts with bicycle officers. Of course there are also the added benefits of maintaining your physical fitness and ease of navigation. “I can get from one part of campus to another in half the time of a vehicle,” he said.

Jake earned bicycle officer certification in 1997 while with the Bisbee Police Department. Now a certified instructor, he is frequently called upon to train bicycle officers around the state and region. He also is a certified physical fitness, firearms, rifle and mental health first aid instructor.

Jake’s youthful dreams, first of being a professional bicycle racer and later an animator detoured to policing when, after taking a break from college, a friend with the Bisbee PD told him he would make a great police officer. “I thought about it, took some time and came to the conclusion that, yes, I think I could be a great police officer.” It’s a decision he has never regretted.

“This career has a allowed me to work with some of the best people on the planet. I consider that a huge blessing. Chief Payne, (former YCPD) Chief (Jerald) Monahan and other leaders in my career field have helped to mentor, mold me and foster me in the right direction. I feel very blessed and fortunate. Now is my chance to give back.”

And, despite the breadth of his law enforcement experience, Jake relishes serving and protecting YC students, employees and visitors. “It has given me the chance to slow down and be there in that moment with people in need. The opportunity to help someone in their time of need is what I signed up for.”

Along with a lot of bicycling, kayaking and exploring Arizona when he’s off duty, Jake is pursuing a bachelor’s degree from Northern Arizona University. He also enjoys an active family life with his wife Yvette, who is working on her prerequisites for nursing school, and the couple’s five sons, Joshua 22, Ethan, 16, Isaiah, 14, Elijah, 10 and Oliver, 8.

“There are a lot of sword fights and pillow fights in my house,” he said.

PrevPreviousWhat are false flag attacks – and could Russia make one work in the information age? – The Conversation
Next7 Fun Activities to Try OnlineNext