Albuquerque mayor pleads with lawmakers to help with crime 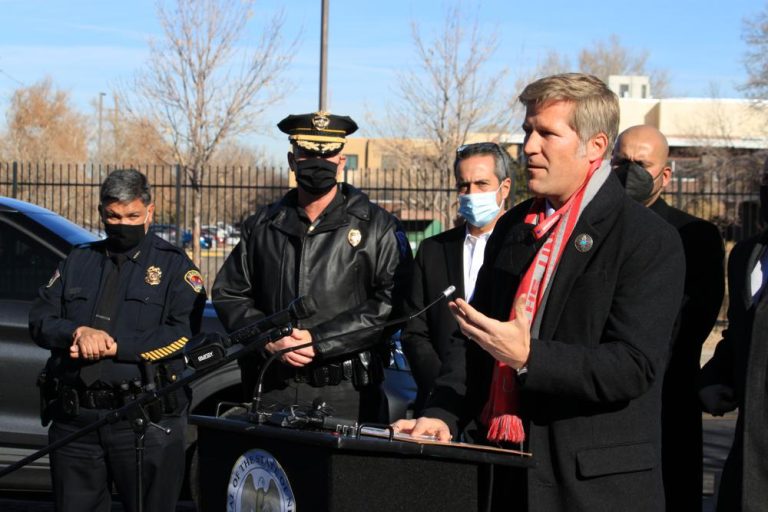 Albuquerque Mayor Tim Keller told a panel of state lawmakers Friday that they need to help New Mexico’s largest city deal with its persistent crime problems by clearing the way for the most violent defendants to be kept behind bars pending trial.

While making his latest plea, the Democratic mayor said residents are “screaming for the Legislature to help our city.”

“We are doing everything we can and we need your help,” he said. “So if that means amending things later, if it means new bills, that’s fine. We just need your help.”

At issue is legislation that would allow for keeping defendants accused of murder, rape and other violent crimes jailed pending trial. District attorneys contend it would help close a revolving door in the criminal justice system, but public defenders and civil rights advocates say there are constitutional concerns and have questioned whether it would address the problem as intended.

Republican Rep. Greg Nibert, an attorney who represents constituents in a rural district 200 miles away from Albuquerque, said he has been working for years to fix what many have recognized as a broken system. He likened the current state of criminal justice to a slap on the wrist.

“I know that we as a legislative body have got to get a handle on crime if we have any reasonable expectation of having economic growth and having more prosperity for our citizens,” he said. “Businesses will not come to a place where there is rampant crime.”

The legislation comes as residents focus their frustrations on New Mexico’s 2016 bail reform effort, which was designed to do away with the cash bail system and keep low-level offenders without financial means from languishing in jail. It also allowed prosecutors to seek detention for defendants deemed dangerous.

Officials with the Albuquerque Police Department testified Friday about the rise in crime over the last several years. Others talked about crime in the suburbs and in communities like Gallup, Aztec and Taos.

Albuquerque shattered its homicide record last year, and there have been several homicides since the start of the year.

In a nod to promises made by politicians during an election year, some lawmakers said they were worried about rushing any changes to the pretrial detention system without fully vetting them.

Nibert expects the matter to end up before the New Mexico Supreme Court.

“It will be challenged,” he said. “And if we are wrong, it will cost the state of New Mexico a lot of money.”

Democratic Rep. Gail Chasey of Albuquerque, chair of the House Judiciary Committee, said she had concerns about how the bill was written and worried that it wouldn’t address the problem.

“I just hope we have actually have a solution that isn’t ignoring the reality and the data that we have now,” she said.

Chief Public Defender Ben Baur warned Chasey’s committee that lawmakers should not be legislating and making policy based on anecdotes. He and other defense attorneys said the Legislature should instead look at improving pre-trial supervision and making sure that monitoring of defendants is constant.

“Unfortunately, it appears that this bill is something which has been presented over the last few weeks and few months as the only way to address the crime problem in Albuquerque,” he said. “It is that sense of crisis that I think has been created in the media and in this Legislature that leads to poor decision making.”

While police officers can attest to seeing more crime, Albuquerque Deputy Police Commander Kyle Hartsock testified that the number of criminals hasn’t necessarily grown, but rather the same people are committing more crimes.

“The same criminals know it’s a joke. They know they can just come out and keep doing these crimes over and over,” Hartsock said. “They know how easy it is to avoid detection of pretrial services monitoring, of probation officers and even police. Keeping certain violent criminals incarnated until their trial is honestly one of the only ways to keep this society safe.”

Defense attorneys argued that the crimes being committed by people on pretrial release account for a small percentage of the crime rate and that they are not the driver of Albuquerque’s problems.

Law enforcement officials also disputed the effectiveness of GPS ankle monitors when it comes to violent offenders, pointing out that defendants are not monitored around the clock nor are there immediate consequences if they violate conditions of their release.

“We have to match the right tool to the right process and the right crimes, and right now GPS monitoring is not the right tool for violent crimes,” Albuquerque Police Chief Harold Medina said.