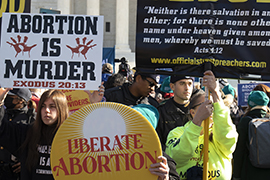 The Supreme Court is expected to weaken or reverse its landmark Roe v. Wade abortion-rights ruling this year, but advocates on both sides of the issue in Arizona are not waiting for the court to act.

Opponents have filed a half-dozen bills in the Legislature, including bills that mirror the laws the high court is considering: A Mississippi ban on abortions after 15 weeks and a Texas ban after about six weeks or so.

And abortion-rights advocates, while acknowledging that the climate “toward abortion and reproductive rights is very hostile” in Arizona, are backing a bill that would allow women to get abortion medication via telehealth.

They are just the latest efforts in a battle that both sides expect to continue, no matter what the court rules.

“The moment that Roe is overturned, the work is just beginning in many ways,” said Cathi Herrod, president for the Center for Arizona Policy, which backs abortion restrictions. “I’m sure that we will have significant political activity by the pro-abortion proponents to change our laws if the states were able to restrict abortion.”

As both sides gear up to fight, both are also keeping their eyes on the Supreme Court, which is widely expected to severely weaken – or overturn outright – its 1973 ruling in Roe, which recognized a right to abortion.

That right was upheld in 1992 by another ruling, Planned Parenthood v. Casey, that prohibited the right to an abortion after a fetus can survive outside the womb, generally considered to be about 26 weeks.

But Mississippi, claiming that scientific advances allow fetuses to survive much earlier in a pregnancy, that passed a law in 2018 lowered the cutoff for an abortion to 15 weeks.

Texas went even further, approving a law last year that prohibits abortions after a fetal heartbeat is detected, which can occur as early as six weeks – often before a woman realizes she is pregnant, critics say. The Texas law also prohibits state officials from enforcing the law, empowering private citizens to do so – what opponents call a “bounty hunter” provision aimed at letting the state get around abortion protections.

Bills mirroring the Texas law – including the bounty hunter provision – have been introduced in both the House and Senate in Arizona. But lawmakers have yet to take action on either, and abortion-rights advocates say they are more concerned about the Mississippi-style proposals.

“Arizona has a tendency to introduce very extreme anti-abortion bills as a way to pass something that seems watered down or less severe,” said Murphy Bannerman, communications manager for Planned Parenthood Advocates of Arizona, referring to the Texas-style laws.

“The bill we’re most concerned about is SB 1164,” the bill patterned after Mississippi’s law, Bannerman said.

Introduced by Sen. Nancy Barto, R-Phoenix, SB 1164 would prohibit abortions after 15 weeks, except in the case of a medical emergency, and would make physicians who perform such a procedure guilty of a class 6 felony.

The Supreme Court could also overturn Roe entirely – something that Mississippi officials specifically requested in their petition. At least some of the justices appeared agreeable to that possibility during oral arguments in the Mississippi case, and with a 6-3 conservative majority on the court, many believe that day is closer than ever.

If that were to happen, both Bannerman and Herrod agree that abortion would again be illegal in Arizona because of a 1912 law, still on the books, that bans abortion unless it is necessary to save the life of the mother.

“If Roe is overturned, then Arizona’s law prohibiting abortion, except to save the life of the mother, would be back in effect,” Herrod said. “Our forecast is that abortion would not be available in Arizona.”

Bannerman agreed that Arizona has “a law on the books from 1912 that bans abortion outright.”

“We also have a legislature that is very conservative and has been pushing anti-abortion bills for a number of years, which has led to a reduction in the number of clinics we have throughout Arizona,” she said.

Against that backdrop, Bannerman said, abortion-rights advocates can only do so much. They have so far introduced just one bill, by Rep. Athena Salman, D-Phoenix, that would let women get abortion medication via telehealth.

“We have been introducing proactive legislation over the last several years, working with our legislators to strip away all of the different restrictions that are currently in place to getting an abortion in Arizona,” Bannerman said. “With the makeup of the Legislature, we don’t have the votes to pass that and with our current governor, it wouldn’t be signed into law.”

Despite having the upper hand, Herrod said abortion opponents are not about to relax. And she does not expect their opponents to do so, either.

Bannerman echoed that statement, but said that any meaningful change will only come by electing “level-headed” politicians who will support abortion-rights legislation.

“That’s why this election year is critical to potentially changing things up in the Legislature, getting more reasonable level-headed folks elected who are going to defend people’s right to healthcare, people’s right to access abortion,” she said.

PrevPreviousOpinion: Race Continues to Roil the Democrat Party – Chris Roberts
NextOpinion: The New Electoral College: A Move to a County-Based System – Inside SourcesNext