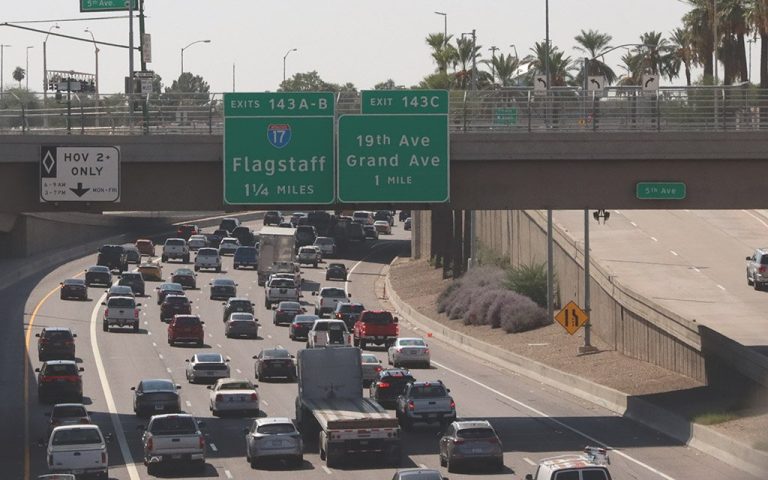 Arizona once again ranked near the bottom of states on a national report card on highway safety laws, earning a “danger” rating as a state with just five of 16 recommended laws and no primary enforcement for seat belts.

It was at least the 10th straight year that Arizona has ranked near the bottom of the annual Advocates for Highway and Auto Safety report.

But one state highway official said the report continues to ignore key information about traffic safety in the state, by focusing on laws on the books instead of Arizona’s aggressive enforcement of those policies.

“All they like to do is look at laws. Laws are great to have, but enforcement is what makes the laws work,” said Alberto Gutier, the director of the Governor’s Office of Highway Safety.

He pointed to new data on the enforcement of the distracted driving law that took effect on Jan. 1, 2021, which allows police to fine motorists who are caught holding and using their mobile device while driving. Police handed out about 12,000 citations for distracted driving in 2021, Gutier said Tuesday.

This is the 19th year the advocacy group has released its report, Roadmap of State Highway Safety Laws.

The latest report, released Tuesday, rates states by the number of highway safety laws they have from a list of 16 recommended policies. They range from drunken-driving laws to motorcycle helmet requirements, from graduated driver’s licenses for teens to primary enforcement of seat belt laws, among others.

States in the report are rated from top to bottom as green, yellow or red. Arizona was one of 11 states to finish in the red category, edging out only Wyoming, Missouri and Montana, which had each four recommended laws or fewer. Eight states and the District of Columbia were rated green and 31 were in the yellow category.

Arizona has received credit since 2020 for the distracted driving law, which passed in 2019, even though enforcement did not begin until last year. Oro Valley Police Lt. Carmen Trevizo, who participated in Tuesday’s release of the safety report, said distracted driving is one of two major issues that often cause serious injuries or death on roadways.

“While fatalities are the worst-case scenario, the effects of a serious collision because of something as silly as being on your phone can also devastate somebody’s life,” Trevizo said in an interview after the release of the report.

But Arizona did not get credit for a law banning cellphone use by novice drivers because it only allows for secondary, not primary enforcement. A primary enforcement law allows police to stop a vehicle if there is a suspected violation of the law, while secondary enforcement only applies to infractions that are discovered after a driver has been stopped for a different offense.

Gutier said secondary laws should not be dismissed so easily, using the state’s seat belt laws as an example.

“We have between 88 to 90% seat-belt use in Arizona with secondary law,” he said. “We have more people wearing seat belts over the states with a primary law.”

National Highway Traffic Safety Administration data from 2019 said Arizona had a 90.6% seat belt usage, which is higher than 16 states that have a primary enforcement seat belt law and 14 states with a secondary enforcement law.

Trevizo said the other major traffic issue is driving under the influence. While she did not have hard numbers, she said that anecdotally she has noticed more collisions involving “polydrug” use, with marijuana as the most common drug involved, since Arizona allowed recreational use of marijuana last year.

The report does not include drug laws in its rating, but it does give Arizona credit for three important impaired driving laws, covering ignition interlock devices, child endangerment and open alcohol containers in vehicles.

Gutier said Arizona has additional impaired driving laws that put the state ahead of others, including the nation’s first DUI phlebotomy program and an electronic search warrant system that allows officers to get a search warrant within 10 minutes of requesting it and draw blood on the scene from drunken driving suspects.

“It’s good to brag about your state when you know you’re doing the right thing,” he said.