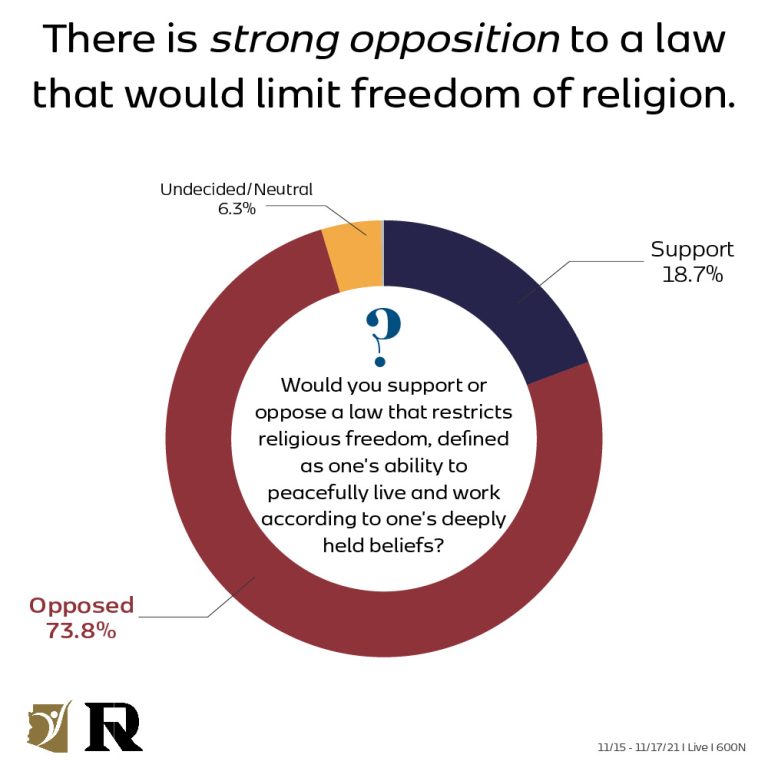 The Resolute Group is pleased to release the results of a live caller survey of likely Arizona General Election voters conducted between November 15th and 17th of 2021. This statewide poll, commissioned by Center for Arizona Policy and conducted by Data Orbital, surveyed 600 respondents on religious freedom, parental rights, and education.

A majority of respondents (53.3%) oppose legislation designating sexual orientation and gender identity (SOGI) as special classes. Only 34.6% of respondents supported both protective SOGI statuses, with 5.8% undecided and 3.5% supporting one or the other, but not both, protected statuses. 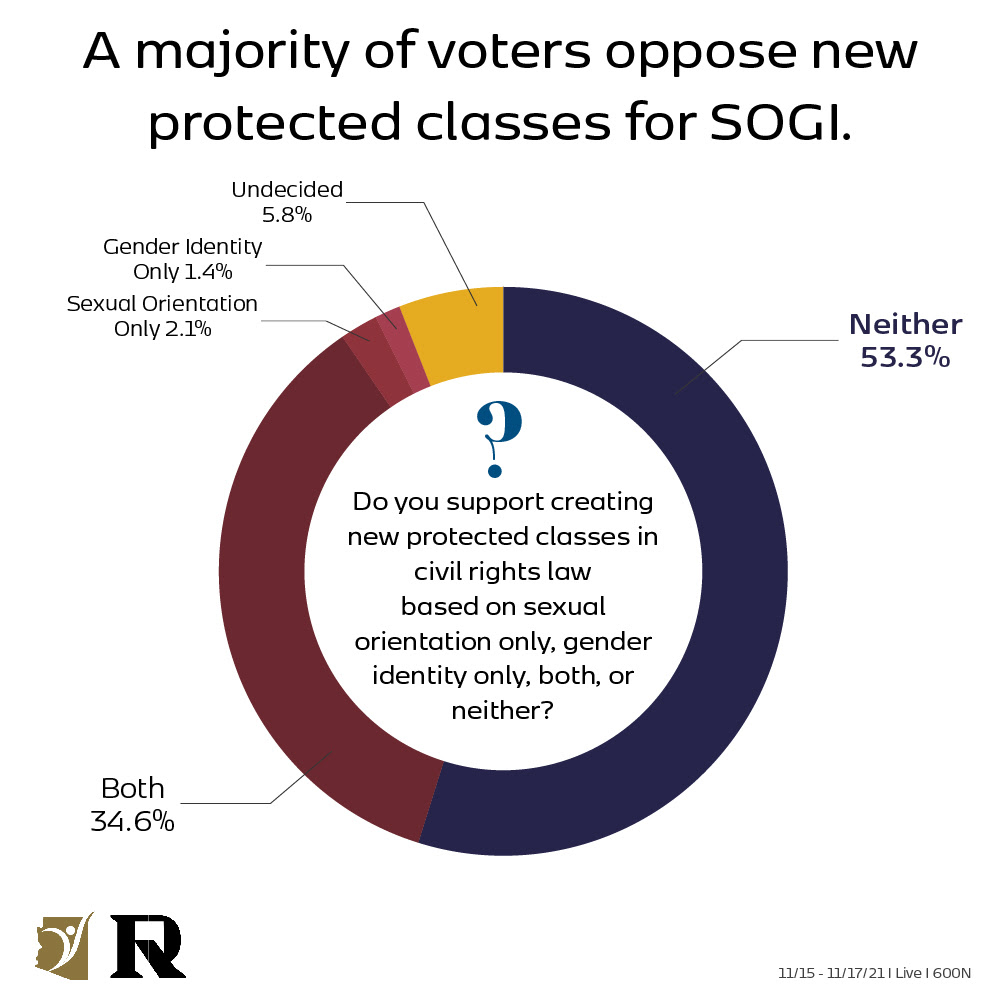 Arizona’s voters across all political affiliations demonstrated a consistent opposition to laws that limited freedom of religion—“defined as one’s ability to peacefully live and work according to one’s deeply held beliefs.” An overwhelming majority (73.8%) opposed laws that restricted religious freedoms, while only 18.7% supported legal limitations. 80.8% of Republicans, 74.0% of Independents, and 67.4% of Democratic respondents opposed any law that would limit religious freedoms—demonstrating that a wide swath of Arizona’s voters across the political spectrum support religious freedom. 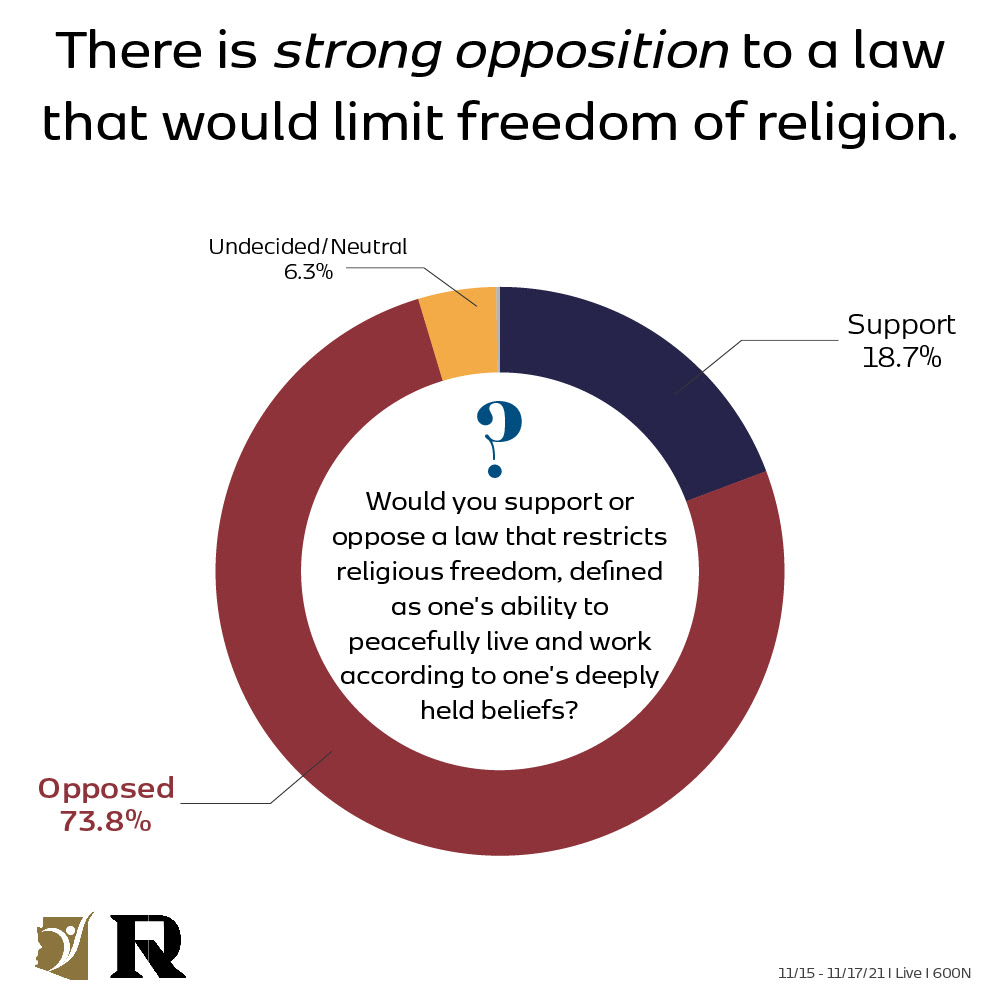 Further, when asked about “non-discrimination” laws passed by some cities and states that have forced creative professionals to “create messages or participate in events that violate their deeply held beliefs,” an overwhelming 65.5% opposed those laws compared with only 19.3% who supported them. 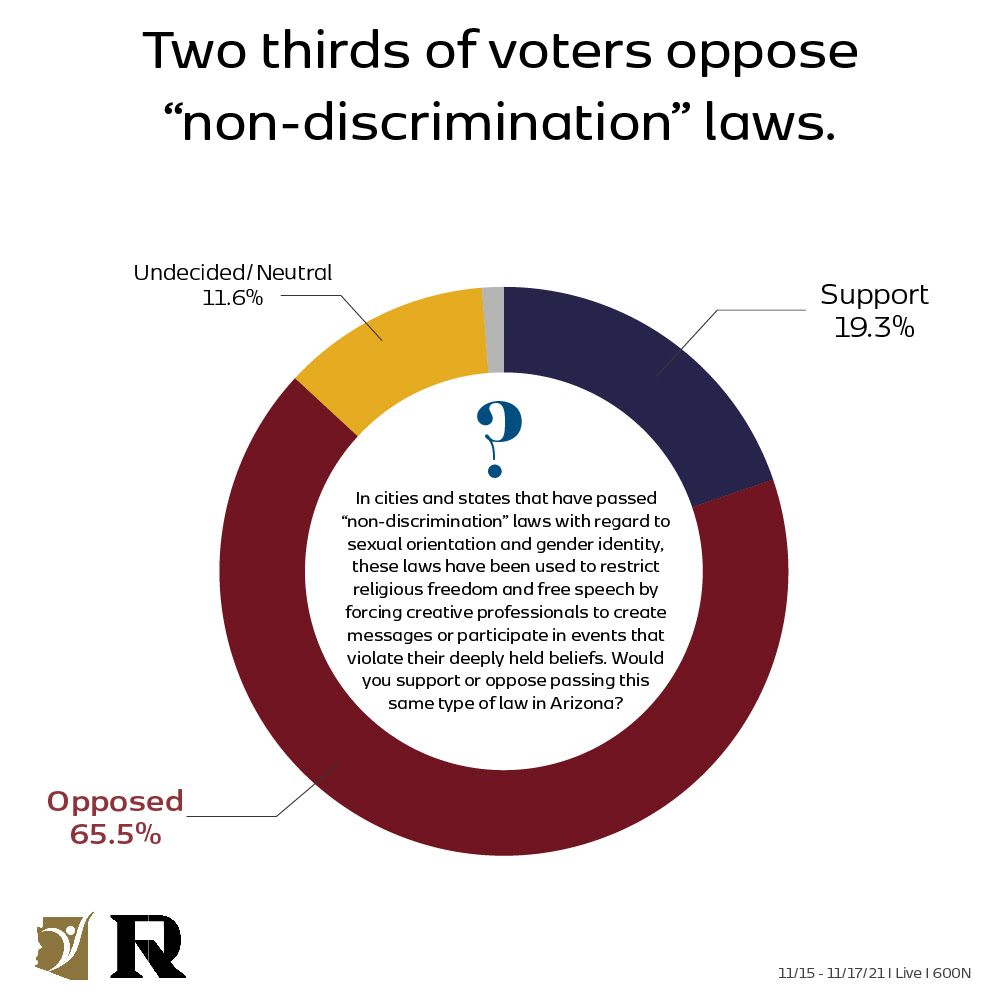 Concern for the effect of laws on women’s safety, privacy, and opportunity was high. When asked, 61.9% expressed support for a law that would prohibit biological males’ access to female locker rooms and shower areas. 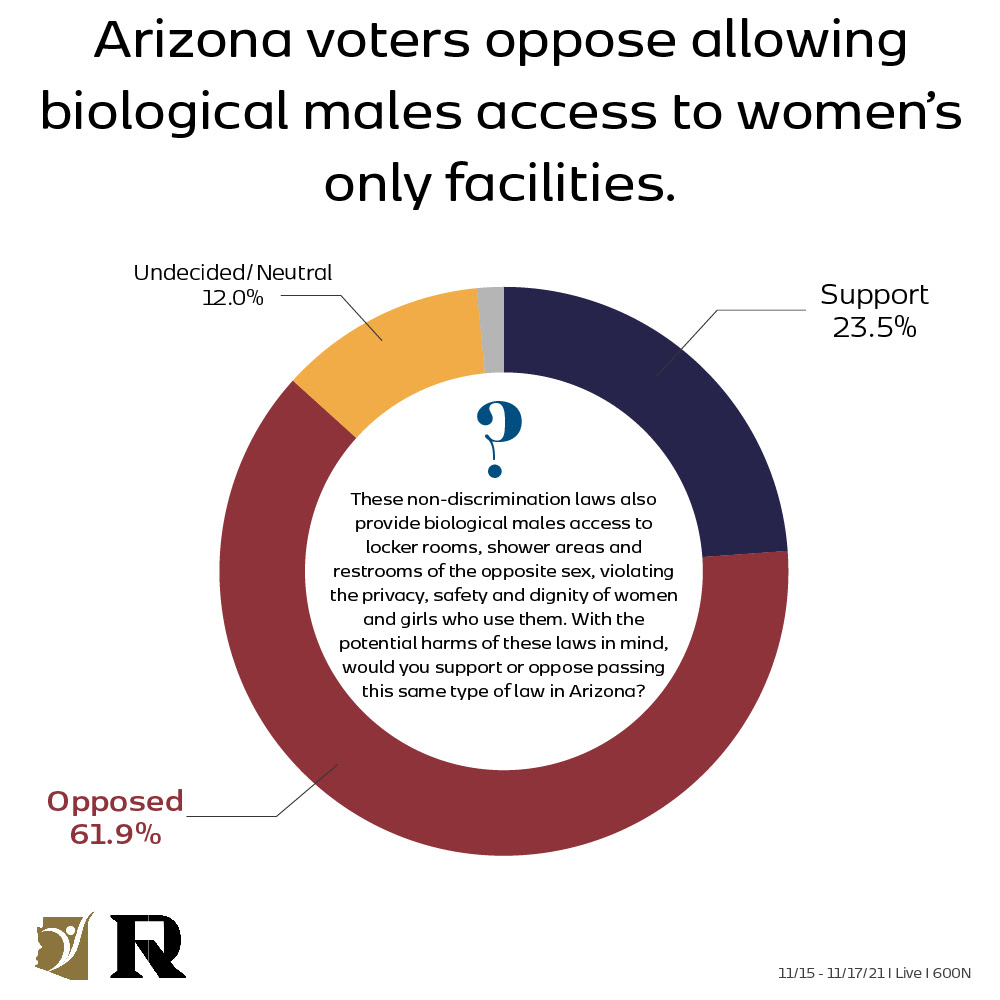 Similar in number were those who supported laws that prohibited biological men from competing in female-only sports (64.3%). 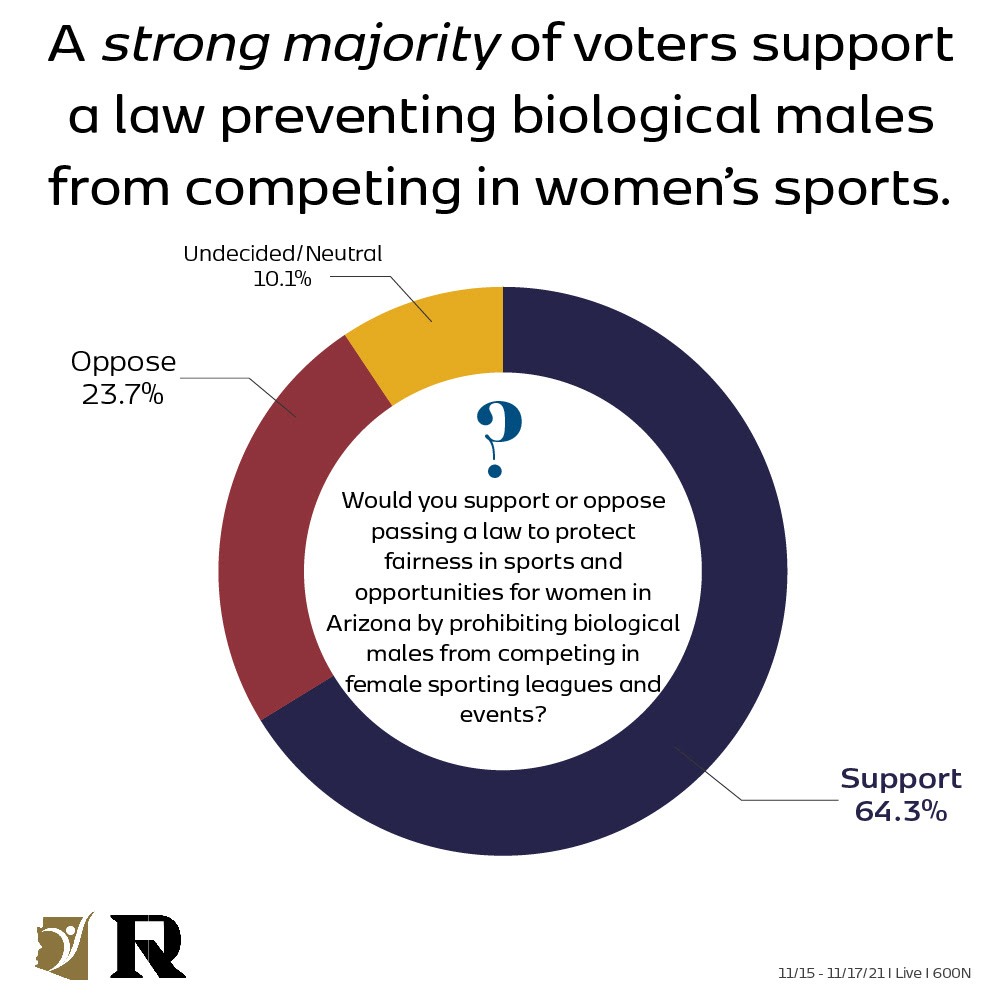 When it comes to education, Arizonans overwhelmingly (80.2%) support extending Empowerment Scholarship Accounts to all students from low-income income families. Only 13.6% opposed this. 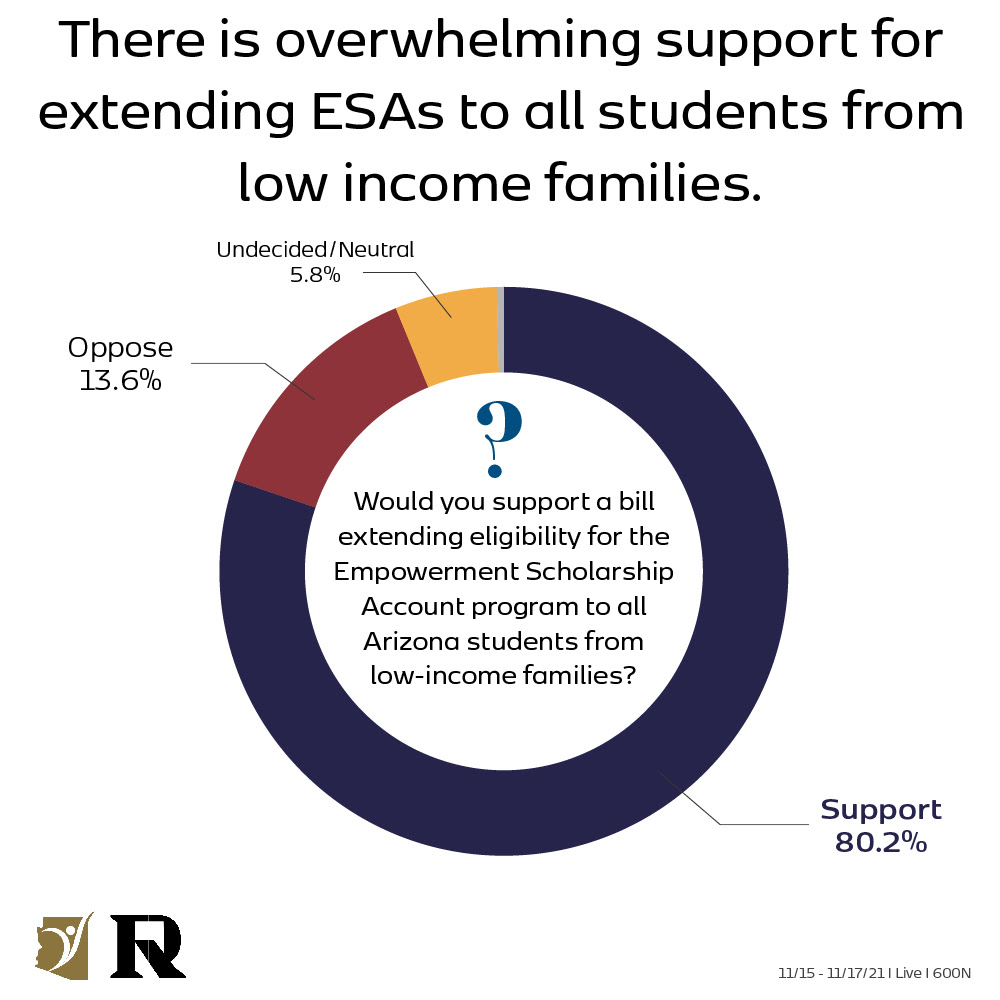 Finally, when asked about parental involvement in public school curricula, more than twice as many voters supported parental input on curriculum than opposed it (62.4% in support, 30.5% opposed). The youngest age segment (18–34) was split on this question, with 44.6% in support, and 46.0% in opposition, whereas respondents likely to have children in the home or those likely to have had children (35+) overwhelmingly supported parental participation in public education (68.8%). 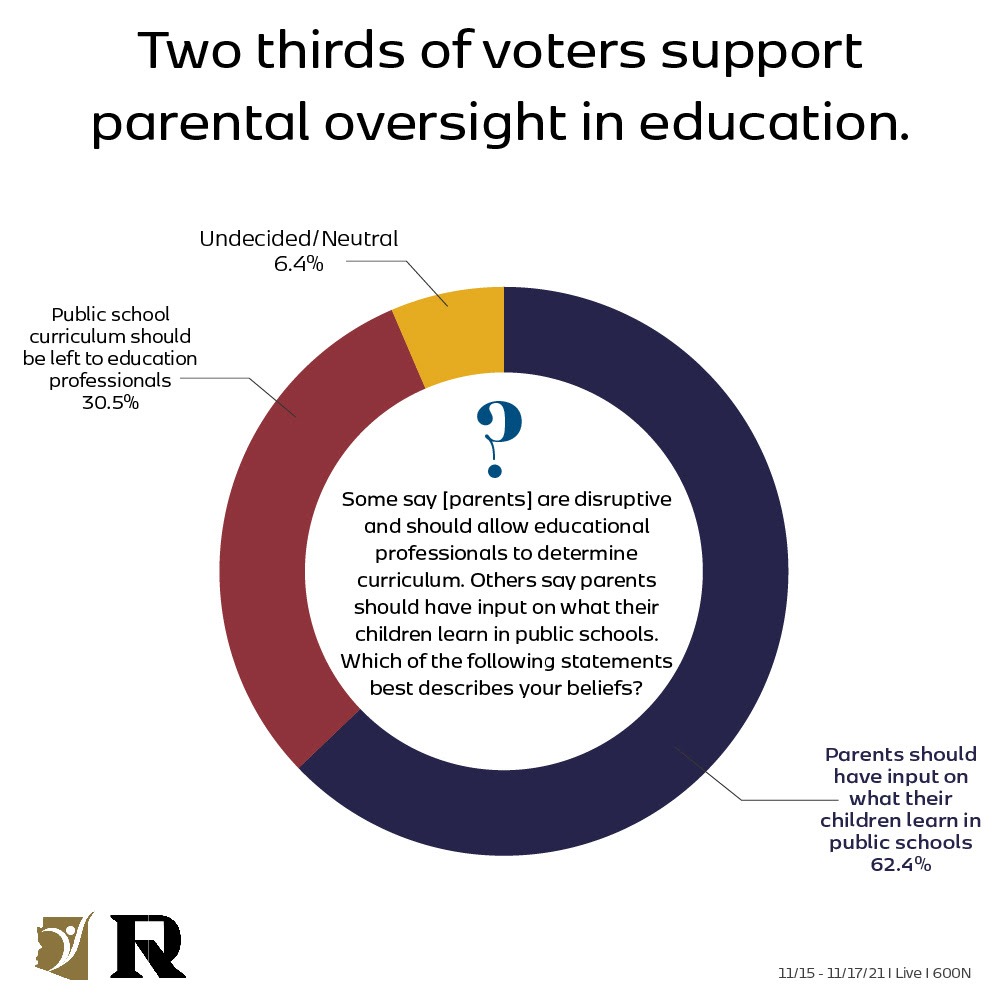 Cathi Herrod, President of Center for Arizona Policy, believes this survey demonstrates once again that Arizonans are looking for commonsense conservative leadership and representation on issues of faith and family. “These numbers cut through the noise of leftist propaganda. Arizonans overwhelmingly believe in parental rights and religious freedoms. Voters in our state, no matter their political leanings, haven’t bought into the Left’s social agenda. Arizonans aren’t asking bureaucrats how to raise their children – they’re asking them to get out of the way and let them do their job. They’re asking their legislators to stop pushing men into places meant to protect the safety and privacy of their mothers, sisters, and daughters. And they oppose laws that disadvantage women in sports. Politicians getting their flawed policy from the media and the Progressive Left should be on watch in Arizona.”

George Khalaf, pollster at Data Orbital and Managing Partner of The Resolute Group stated, “These results show Arizona’s voters consistently stand strong on family values, defend parental rights and support education options. It is also clear that similar to patterns nationally, Hispanic voters are further apart than ever from the Democratic party when it comes to culture issues. With the winds at the back of Republicans going into 2022, those looking to run this cycle better understand these results and listen to the strong voices of Arizonans on these important issues.”

Between November 15th and 17th, 2021, 600 likely General Election voters were surveyed live via landline phones (60%) and cell phones (40%). Demographic makeup of respondents is modeled on previous General Election turnouts. Survey results have a ±4.00% margin of error and a 95% confidence interval. All questions not released here are not reasonably expected to influence responses to released questions. Questions quoted from the survey are represented here verbatim. Topline and demographic data can be found here, and cross tabs, here. 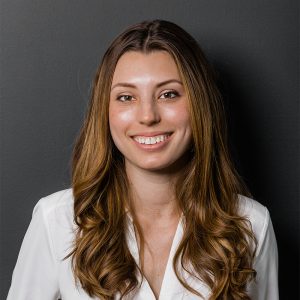