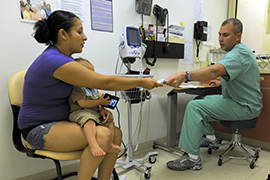 Arizona outperformed the nation on its rates of premature births and infant deaths, despite having some of lowest rates of prenatal care among the states, according to a recent March of Dimes report.

But Arizona ranked fourth-highest in 2019 for its level of “inadequate prenatal care,” with 20.3% of women receiving less than half of the appropriate number of doctor visits during their pregnancies. Only New Mexico, at 24.8%, and Texas and Hawaii, tied at 20.4%, were higher.

Deena Bradford, executive director of Market Impact for Arizona March of Dimes, blamed it on women who are uninsured or who live in underserved areas, what the report calls “maternity care deserts.”

“There is a lack of prenatal care in desert areas, and pregnant women are unable to get to prenatal appointments or understand the importance of prenatal care,” Bradford said. “We want to definitely see the trends where we see less preterm births and infant mortality, and that is where we are coming in with more education and more resources in the community.”

Resources like the Mobile Health Program, she said, a health unit that “allows uninsured mothers to receive prenatal care they may not have before.”

The program, which focuses on parts of southern Arizona where health care can be scarce, services about 2,400 people a year, according to its website, which says “no one is turned away regardless of ability to pay for services.”

“We empower pregnant women to get an education and push them during the pregnancy to help them know all of the resources available to them,” said Nury Stemple, a community health worker for the program. “A lot of them can’t get help so we bring the help to them.”

She said organizations and programs like hers are one reason the state can post relatively good maternal health numbers despite the lack of care in rural areas. But Stemple said nonprofit organizations can only do so much and they cannot serve every pregnant woman who is unable to get prenatal care.

“The sad part is that you see mothers and their babies die because they can’t afford health care,” Stemple said. “There is something wrong with our system.”

The foundation is named for Hall’s son, Graham, who was born by cesarean section on Nov. 23, 2006, at just 25 weeks, after his mother developed preeclampsia, a pregnancy complication. Graham’s twin sister, Reece, survived but Graham lived just 45 days, his short life spent in neonatal intensive care.

“The causes of prematurity are incredibly diverse,” Nicholas Hall said. “It isn’t always something you can plan for and, unless it’s due to an issue caught early on, it’s not something that you can predict.”

Hall said having babies is a “tricky and risky business for humanity,” but he believes that hospitals are doing a “better job of intervening and saving mothers and babies that go through a traumatic birth.”

But health experts continue to focus their efforts on prenatal care in hopes of preventing preterm birth and infant mortality.

“When you’re looking at prevention, a lot of times it requires a significant amount of time before you actually see a significant drop in rates,” said Patricia Tarango, chief of the Bureau of Women’s and Children’s Health in the Arizona Department of Health Services.

Tarango pointed to a 2019 action plan developed by the health department to address maternal mortality in the state. The goals highlighted in the plan include increased awareness of warning signs, improved access to care and more.

“What we’re really hoping for is some stability, and then identifying evidence-based strategies that can be implemented to really help us hone in on where the disparities exist,” Tarango said.

Dr. Mary Ellen Rimsza, pediatrician and chair for the Arizona Child Fatality Review Program, said the most important strategy to implement is access to prenatal care, the area where the state is lagging most. Rimsza said a lot of preterm births are due to an unhealthy pregnancy and poor maternal health, which could be headed off with access to prenatal care.

“It’s often hard to know the specifics of how we can prevent the deaths,” she said. “But one of the factors we do know is important in preventing births, and deaths, of premature babies is prenatal care.”

Bradford is hopeful that rates will continue to improve with the help of nonprofit organizations, programs such as the mobile health unit and collaboration with health care providers across the state.

“This is a long road ahead of us and I feel it will improve little by little,” Bradford said.

PrevPreviousOpinion: How We Forfeited the Fruits of Cold War Victory – Pat Buchanan
NextOpinion: Islam Won’t Conquer the World — But Africa Might – Chris RobertsNext