‘Add to your world’: ASU student starts initiative to help people without homes 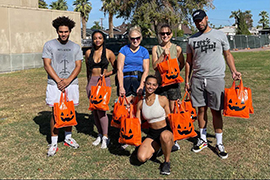 This story is made possible through a partnership between ASU’s Walter Cronkite School of Journalism and The Difference Engine, a university-wide center focused on combating inequality.

For some, Saturdays are a day of relaxation after the workweek grind. For Tierra Hopkins, they’ve become an opportunity to make a difference in the community.

The Arizona State University exercise and wellness major has spent many a weekend working out in parks around metro Phoenix. When the 24-year-old began noticing the number of people experiencing homelessness at the parks, she combined her passion for fitness with a desire to help those in need.

Hopkins started leading workout sessions at area parks for free, with one ask of her participants – bring an item to donate to those without homes.

“I don’t know this exact quote, but it’s something along the lines of, ‘Contribute to your world,’ or ‘Add to your world,’” Hopkins said of her motivation to help. “I feel like I have an obligation.”

Each 30-minute workout session includes two or three circuits of full-body exercises and a cooldown. Afterward, Hopkins and participants divide up the donated items – usually water, food and toiletries – place them in bags and walk around the park, handing them out.

Her efforts began in summer 2020, as advocates for those experiencing homelessness worried that the economic repercussions of COVID-19 were driving more people onto the streets.

The number of people experiencing homelessness in the United States has increased over the past four years.

Arizona’s homeless population increased about 23% from 2017 to 2020, and from 2019 through 2020, the state had the nation’s fourth-largest increase in the number of people experiencing homelessness, according to federal statistics.

On any given night across the state last year, about 11,000 people experienced homelessness.

Because of the pandemic, annual homeless counts were canceled in 2021, but experts predict that job losses related to the pandemic and the end of the federal eviction moratorium likely will push those numbers up.

The help comes at a time of soaring housing costs. In Phoenix, the average rent for a one-bedroom apartment is about $1,397, a 6.6% increase from October 2020 to October 2021, according to the latest report from Apartment Guide. And home prices were up 24.4%, selling for a median price of $404,000, the real estate company Redfin reports.

Hopkins grew up in Aubrey, Texas, a town of about 3,700 people an hour’s drive north of Dallas. Although homelessness wasn’t an issue there, she was raised to make community service a priority.

Her mother, Suzanne, remembers when Tierra was given a homework assignment in elementary school to write about her career goals.

“It made me cry because … it was about how she wanted to be a teacher and work with kids like her mom,” she said. “But she wanted to do more than just what her mom did. She wanted to help those kids that were in need and find ways to help improve their life.”

As a kid, Hopkins would help her grandmother drop off groceries and supplies for low-income families.

“She’s always found joy in that,” Suzanne Hopkins said. “Then we just continued throughout the years with church and everything else in school, the community service piece, so I think that’s where it started.”

According to the latest statistics from the U.S. Department of Housing and Urban Development, states in the West had the highest rates of people experiencing homelessness in unsheltered areas in 2020. That means living on the streets, in abandoned buildings or in other places not suitable for habitation, as opposed to being housed in emergency shelters or other safe havens.

In Arizona, over half of those experiencing homelessness in 2020 were unsheltered – and that’s led to some questionable interactions between authorities and those on the streets.

In August, the U.S. Department of Justice began investigating whether Phoenix police have been unlawfully seizing and/or disposing of the belongings of unhoused people. Phoenix Police Chief Jeri Williams said the department is cooperating in the probe.

Hopkins has held her Saturday morning workouts at various parks, including Margaret T. Hance Park in Phoenix and Daley Park in Tempe, which has experienced a 96% increase in unsheltered people from 2017 to 2020, according to the city’s website.

Mayor Corey Woods told Cronkite News he is working with other mayors to see how they can tackle this issue together.

“It’s not a situation where I think Tempe can solve the problem all on our own. As we know, homelessness knows no borders or boundaries,” Woods said. “The same people could be in Tempe one day or … in Phoenix or Chandler or Scottsdale the next day. So we have to work together and work collaboratively.”

The city also partners with such organizations as the Tempe Community Action Agency, which in 2020-21 helped over 38,000 people with rent and utility assistance, hunger relief, overnight shelter and meals.

A drop-in center provides computers, water and heat relief, and other assistance to people in need, while mobile trailers offer hot showers and laundry services. Through the I-HELP program, churches and businesses provide overnight lodging.

“The I-HELP program is offered every night of the year,” said Juliet Armstrong Starkey, senior director of operations for the agency. “We’ll provide a dinner every single night to our population. They stay the night, and then they leave the next morning. And we try to leave the locations better than we find them.”

Moving forward, the agency is working to expand its shelter capacity. It houses on average 40 people a night and would like to get that number close to 70, Starkey said, but it also wants to raise money for a building in Tempe to use as an emergency shelter.

“Our mission is to serve folks and alleviate some of the tough things people are going through,” she said.

As for Hopkins, she hopes to continue offering her workout sessions and wants to collaborate with other shelters and organizations to help more people.

“The first couple ones that I was doing, I kept seeing the same people. That just broke my heart,” she said. “All I’m giving is food or a T-shirt or something. I wish I had more to give so they have somewhere to sleep that’s not outside.”

Hopkins remembers getting dog food for one person and being struck by the immense generosity of someone who had so little.

“It’s a little heartbreaking to know that there are people that have nothing but will give everything just for an animal,” she said. “So why are we not giving everything we can for human beings?”