‘I was struggling to survive’: Event raises awareness for suicide prevention 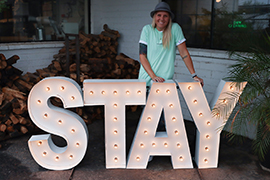 Approximately 130 Americans die by suicide every day, according to Suicide Awareness Voices of Education.

Kirsty Hallam, 31, from Liverpool, United Kingdom, was almost one of them.

Hallam shared her story in an essay at the annual “Stay” event, which was focused on suicide awareness prevention and put on by Only Human, a company that sells apparel and works to give back to other organizations. The title “Stay” is to encourage those contemplating suicide to stay on earth among the living.

Hallam wrote about her struggle with mental health and bodily health – she was diagnosed with Type 1 diabetes at age 8.

“I was struggling to survive with doing 80-hour weeks every single week and people still wanting more from me,” she wrote. “Whatever I gave, it wasn’t enough for them. When I gave them more, the response was, ‘Why were you not always giving this much?’”

The birth of Hallam’s godson provided a turning point. She had made a plan to take her own life, but then she received a text from her best friend, telling Hallam that she and her newborn missed her. That simple text helped Hallam take control of her life for the better.

“I’m not going to tell you after that moment everything got better and now I’m thriving because that would be a lie,” Hallam wrote. “I still struggle every day. Sometimes things continually pile on top of you and the world and your life will continue to test you. It’s not easy, but I try to be present and stay. For my godson, for my family. For the kids I work with that struggle to want to stay and need me to tell them that we will get through it together.”

“Stay” was presented during September, which is Suicide Prevention Awareness Month. At Only Human’s art gallery in Phoenix, people gathered to discuss the importance of suicide prevention and how mental health has affected society as a whole.

“So I’m really excited this year to get back out in person [after not having in-person events due to the pandemic] and connect with people,” founder Bree Pear said. “There’s always something heartfelt in those moments – when you’re actually in person, you can talk and build community.”

This year’s theme was “Words matter.”

During September, Only Human partnered with The Jed Foundation, a nonprofit that works to prevent suicide for U.S. teens and young adults, giving the foundation 10% of the proceeds from “Stay” and company net profits for the month.

“I think (the pandemic) really did take a toll on the mental health of the entire population of the world,” said Thea Zunick, manager and community engagement of The Jed Foundation, which is headquartered in New York.

“And I think it became easier to talk about mental health and I also know that this young generation we have is incredible, they are inspirational, they are talking about things that I would never dream of talking about. And they happen to be incredibly resilient.”

The Centers for Disease Control and Prevention calls suicide “a serious public health problem that can have lasting harmful effects on individuals, families, and communities.”

The CDC ranks suicide as the 10th leading cause of death in the U.S. – responsible for more than 47,500 deaths in 2019. Twelve million American adults seriously thought about suicide in 2019, 3.5 million had a plan and 1.4 million Americans attempted suicide, according to CDC data.

“We are constantly reprimanded in life for taking our struggles to heart and for having a hard time for them,” Hallam wrote. “We are constantly told others have it worse. Don’t let anyone tell you that your suffering is less than anyone else’s. It is all real and it is all of value.”

Hallam and others who wrote about their reasons to stay encouraged people contemplating suicide to know their worth. Physical health plays a role in staying healthy but mental health is just as important as it affects overall health, according to the CDC.

“Suicide prevention awareness is as important as any awareness around your physical health,” Hallam told Cronkite News. “It can have just as many effects on your well-being as any physical ailment, if not more. It still doesn’t get spoken about enough.”

If you or someone you know is struggling with thoughts of suicide, the National Suicide Prevention Lifeline is available all hours at 1-800-273-TALK (8255) or via online chat.