4FRI revived: Wildfire-prevention program back on track after months of delay 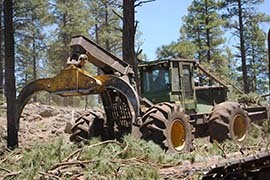 The popular 4FRI forest maintenance program is back on track with a more focused, “more realistic approach” that appears to have government, industry and environmental officials in rare agreement.

The U.S. Department of Agriculture had abruptly halted negotiations on an extension of the Four Forests Restoration Initiative in September, a move that caught stakeholders by surprise. It took months, but the department announced in November that a deal had been reached to renew the program.

The change came after the Forest Service dropped plans for one large, multiyear contract for more than a half-million acres of forest and turned instead to a range of proposals that differed approaches, sizes and terms of projects going forward.

Forest Service Chief Randy Moore said his agency is “increasing the scale of our investments into the 4FRI project” and that the new strategy “will focus our forest maintenance work to reduce wildfire danger” in the targeted forests.

“By placing our treatments in the right places and at the right scale, we will reduce wildfire risk, protect communities, and restore forests,” Moore said in a statement at the time.

The service committed $54 million in fiscal 2022 to accelerate high-priority projects on 135,000 acres over the next 10 years and said it will also focus on the maintenance of road and bridges in the area.

The news was welcomed by supporters, who said 4FRI has thinned more than 700,000 acres of national forests in eastern and northern Arizona since 2010, with a goal of protecting 2.4 million acres in the Apache-Sitgreaves, Cococino, Kaibab and Tonto national forests over the next 20 years.

Rep. Tom O’Halleran, D-Sedona, said the “long overdue” agreement is “needed badly to protect the communities and the citizens throughout those national forests.”

Todd Schulke, co-founder of the Center for Biological Diversity, said two things have changed since the government halted talks on the renewal.

“One is they’ve decided to focus the efforts for mechanical thinning on existing industry that is already in the area, and sort of sizing their program to fit that existing industry,” Schulke said.

“They’re also realizing that they need to focus on using some new tools that are available that provide the best available science on what the highest priority acres are that need mechanical treatment,” he said.

The latest USDA proposal talks about program “optimization,” which Schulke called a “model-based approach that allows them to identify those highest-priority acres.”

“In other optimization efforts around the West the number of acres that are critical for mechanical treatment are significantly less than the typical Forest Service approach,” he said.

While he welcomed the use of optimization in part of the 4FRI area, Schulke said it should be applied over the entire area “to make sure that we are thinning the most critical acres, and identifying acres that can be restored with fire alone.”

Wildfire prevention is not the only goal of the project, which can also help with water conservation and in the fight against climate change.

“It’s critical to the protection of watersheds that help supply the water throughout the municipal areas, but also our agriculture and ranching and other communities throughout Arizona and other aspects of national forest,” O’Halleran said.

He also said that “from the climate change perspective,” the forest maintenance program “helps store the carbon that is produced within society today.”

When it stopped talks in September, the Forest Service said it needed to reassess the goals of the program because they were “not reasonably aligned to industry needs” and presented a risk to the government as well.

But big-industry proposals that were being evaluated at the time are no longer on the table, Schulke said. Since the new approach decreases the need for mechanical thinning, small restoration businesses will continue to be involved in the “modest but effective amount of thinning getting done every year,” he said.

“The Forest Service committed to providing acres to those small restoration businesses to allow them to do this consistent amount of work every year, and then they would fill in around them with more prescribed burning and managed fire,” Schulke said.

O’Halleran said the changes should make it easier for businesses to make a long-term contractual commitment to the program, which he said is critical to the region.

Leaving the timber in the forests can create conditions for “catastrophic fire, so the ultimate outcome is satisfactory to the people of Arizona and to the health and availability of our forest to be used,” O’Halleran said. “The end result will be much more productive forests and safe communities.”

“The end result will be much more productive forests and safe communities,” he said.

“It’s a more realistic approach, and as long as they can manage to fill the gaps, like with road maintenance and things which were really the big costs that killed the large RFP, as long as they can find funding to cover those costs we feel like this is a rational approach and one that’s likely to be effective over time,” Schulke said.