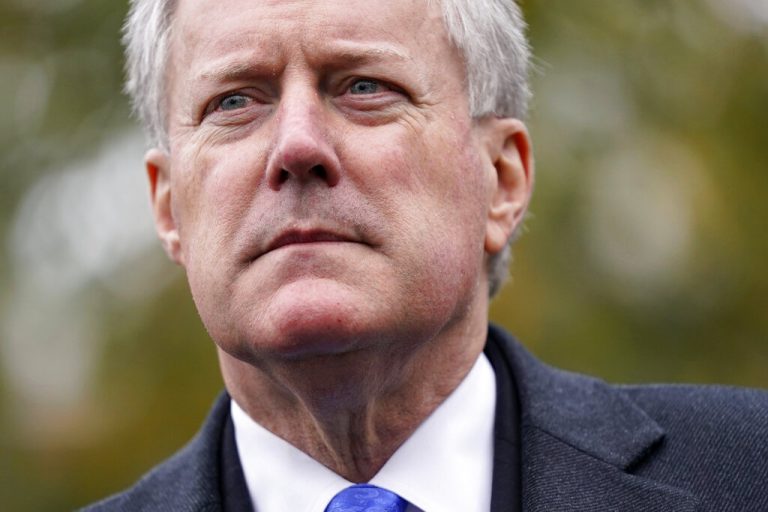 Former Trump White House chief of staff Mark Meadows on Wednesday sued the House committee investigating the Jan. 6 Capitol insurrection as the chairman of the panel pledged to move forward with contempt charges against him for defying a subpoena.

The dueling actions laid bare simmering tensions between the committee and Meadows, seen by Democratic lawmakers as a pivotal player in their investigation, and reflected a remarkable turnabout from last week, when Meadows had declared his intention of cooperating with the committee on certain areas of their inquiry.

Meadows’ lawsuit, filed in federal court in Washington, asks a judge to invalidate two subpoenas that he says are “overly broad and unduly burdensome.” It accuses the committee of overreaching by issuing a subpoena to Verizon for his cell phone records.

The complaint was filed hours after Democratic Rep. Bennie Thompson, the committee chairman, declared he had “no choice” but to proceed with contempt charges against Meadows. Meadows did not show up Wednesday for a scheduled deposition after his lawyer, George Terwilliger, told the committee his client was ending his cooperation.

Thompson noted that Meadows has already provided documents to the committee, including personal emails and texts about President Donald Trump’s efforts to overturn his 2020 election defeat, and has also published a book, released this week, that discusses the Jan. 6 attack.

“That he would sell his telling of the facts of that day while denying a congressional committee the opportunity to ask him about the attack on our Capitol marks an historic and aggressive defiance of Congress,” Thompson said in a letter to Terwilliger.

The move to hold Meadows in contempt comes as the committee has struggled to gain compliance from a few of the former president’s closest and most high-profile allies. Still, the committee has already conducted more than 250 interviews with witnesses about the riot.

Shortly after the lawsuit was filed, Thompson said he hadn’t read it yet, but he questions its merit because the committee was legitimately formed by the House.

He said the investigation doesn’t “rise or fall” on Meadows or any other witness.

“We move forward,” he said, noting that the panel has several scheduled depositions this week.

Committee leaders have said they intend to punish anyone who will not comply with the probe, and the House has already voted to hold longtime Trump ally Steve Bannon in contempt after he defied their subpoena. The Justice Department later indicted Bannon on two counts.

A committee vote to recommend the contempt charges against Meadows could come as soon as next week, Thompson said.

In his letter to Terwilliger, Thompson summarized a handful of the thousands of documents that Meadows has already provided, including communications that involve White House efforts to overturn Joe Biden’s election victory. Meadows provided the committee last month with personal emails and backed-up data from his personal cellphone, including text messages, Thompson said.

He said the documents Meadows turned over included an email dated Nov. 7, 2020 — the day Biden was declared the White House winner — that Thompson described as “discussing the appointment of alternate slates of electors as part of a ‘direct and collateral attack’ after the election.” Thompson did not say who sent the email or give further details.

Thompson also described an email that referenced a 38-page PowerPoint presentation titled “Election Fraud, Foreign Interference & Options for 6 JAN” that Thompson said was intended to be shared on Capitol Hill. Thompson did not further elaborate on the email but said it was dated Jan. 5, 2021, the day before hundreds of Trump’s supporters violently breached the Capitol and interrupted the certification of Biden’s victory.

A separate Nov. 6, 2020, text exchange between Meadows and an unidentified member of Congress, Thompson wrote, was “apparently about appointing alternate electors in certain states as part of a plan that the member acknowledged would be ‘highly controversial,’ and to which Mr. Meadows apparently said, ‘I love it.'”

Also included in the documents, according to Thompson: a Jan. 5, 2021, email about having the National Guard on standby the next day; an “early 2021 text message exchange” between Meadows and an organizer of the rally held the morning of Jan. 6, when Trump told his supporters to “fight like hell”; and “text messages about the need for the former president to issue a public statement that could have stopped the Jan. 6 attack on the Capitol.”

Terwilliger did not immediately respond to a request for comment on the letter or confirm the contents of the documents.

Meadows’ decision to stop complying with the committee was a reversal after he had initially agreed to the deposition and after Terwilliger said the committee was open to allowing him to decline some questions based on Trump’s executive privilege claims.

Terwilliger told the committee in a letter this week that a deposition had become “untenable” because the committee “has no intention of respecting boundaries” around questions that Trump claims are off-limits.

Trump has attempted to hinder much of the committee’s work, including in an ongoing court case, by arguing that Congress cannot obtain information about his private White House conversations.

Terwilliger also said he learned over the weekend that the committee had issued a subpoena to a third-party communications provider that he said would include “intensely personal” information about Meadows.

“As a result of careful and deliberate consideration of these factors, we now must decline the opportunity to appear voluntarily for a deposition,” Terwilliger wrote in the letter.

In his response, Thompson confirmed the subpoenas to a third party but said it “does not impact Mr. Meadows’s production of documents and text messages, which are the areas we seek to develop during his deposition.”

The committee in August issued a sweeping demand that telecommunications and social media companies preserve the personal communications of hundreds of people who may have been connected to the attack. But the panel did not ask the companies to turn over the records at that time.

As the investigation has progressed, the committee has “sought data that will help answer important questions” but does not include the content of the communications, according to a committee aide who was not authorized to publicly discuss the investigation and spoke on condition of anonymity. The metadata requested includes dates and times of the communications, which could include both emails and texts.