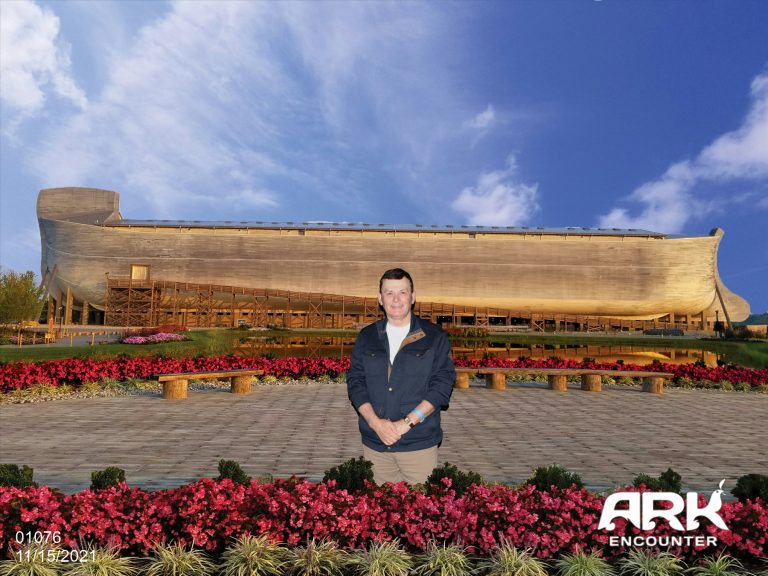 On a recent trip back East I visited what has become a great and growing place of pilgrimage for people of faith–the Ark Encounter in Williamstown, Kentucky.  As the name implies, the ark in question is a full-scale, life-size replica of  the Biblical Noah’s Ark.  Built by a Christian ministry known as  Answers in Genesis,  the Ark Encounter opened  in 2016 and now draws a million visitors a year.

There was a time not long ago when nearly everyone knew  the Bible story of a worldwide flood sent by God to punish mankind for their wickedness and idolatry. And most of us tucked it away along with other Bible stories about Adam and Eve and Cain and Abel—interesting stories,  part of our Judeo-Christian heritage– but not necessarily to be  taken literally.  With my visit to the Ark Encounter came the  realization that  I hadn’t studied this Bible story with nearly the care it deserves.  Here is the relevant passage from Genesis Chapter 7, Verse 6:

Noah was six hundred years old when the flood waters came on the earth. And Noah with his sons and his wife and his son’s wives, went into the ark to escape the waters of the flood.  Of clean animals, and of animals that are not clean, and of birds, and of everything that creeps on the ground, two and two, male and female, went into the ark with Noah, as God had commanded Noah.  And after seven days the waters of the flood came on the earth.

Modern science dismisses the idea of a flood so great as to cover  the entire surface of the earth  as a mythic story from man’s prehistory.  Even people of  faith consider the Great Flood to be a folktale or parable that conveys a  moral truth but couldn’t possibly have  happened in any literal sense.

The Creation Scientists at Answers in Genesis beg to differ. To make their case they have constructed in the rolling hills of northern Kentucky an exact replica of Noah’s Ark built to Biblical specifications.  It’s believed to be the largest free standing wooden structure in the world. 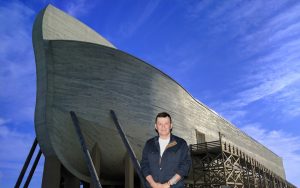 How big is the Ark?  Huge. The Bible story refers to cubits as a form of measurement. Historical sources  indicate  that a “royal cubit” used in ancient building projects was the length of a forearm with a palm added—standardized to roughly 20.5  inches. This measurement results in an ark that is 510 feet long, 85 feet wide,  and 51 feet high. That works out to a structure one and a half football fields in length encompassing  1.8 million cubic feet of volume spread out on three interior  decks. Enough  space to  accommodate 450 semi-truck trailers.  Concrete and steel supports have been  used to keep the structure upright on dry  land,  but the ark itself is built entirely of wood— 3.3 million  board feet.  Amish  woodworkers were brought in to help with the  dowels  and  timbers.  Entering  the vessel, the visitor is  struck with its  interior vastness and the familiar smell and warmth of natural woods.

The Bible story says God called  Noah and told him to build the ark with his three sons,  Shem, Ham, and Japheth. My first  reaction on seeing the ark was skepticism. The vessel is simply too big for a handful of men to build in a lifetime. But the Bible gives much longer life spans for pre flood man.  Noah was 950 years old when he died and he lived 350 years after the flood. He and his sons may have had much  more than a conventional life span to build the ark.

How many animals did  Noah take on the ark?  The fossil record tells us that millions of life forms have lived on the earth.  But Noah was not charged with saving all life forms. The Bible passage says the ark held  creatures that breathe and creep on land. That  excludes marine life and insects,  the most numerous life forms.  Biblical authorities vary on the  number of animals that would have been brought onto the ark.  Answers in  Genesis gives a precise number—6,744 animals and 1,398 kinds.

Modern biology classifies species and subspecies.  But the Bible refers to  “kinds” which are defined as animals with the ability to interbreed.  Under this  definition, for example, all wolves, coyotes,  dingoes  and  dog breeds could come from a  single breeding  pair.  The many varieties of cattle could have descended from a single breeding pair, and so on.

Was there enough space?  The average size of an animal brought onto the ark was about the size of a sheep.  Juveniles, which are normally healthier than adults could have been used to conserve space and require less food.  This would have particular importance  for large animals such as elephants and giraffes.  Given the roughly 7000 animals  housed  in pens or cages,  the 1.8 million cubic feet of space on the ark would have been more than sufficient.

What about food and water?  Food would have consisted of  dried fruits, seeds,  nuts, and grains.  Fish would have been available from the sea.   Animals on the ark would have  provided  fresh milk and eggs for Noah and his family.  Would there have been enough room?  Answers in Genesis estimates that there would have been enough storage space for food to last 1.5 years—around three times longer than the actual flood.   The enclosed,  flat roof structure of the ark  allowed for the collection of fresh water sufficient for consumption and sanitation.

How did the animals get to the ark?   Did Noah go out and catch them and herd them on board?  The Bible doesn’t say.  It simply says the animals went into the ark with Noah, as God had commanded.  We are, after all,  dealing with the world of the supernatural. 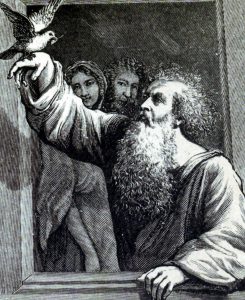 The Ark Encounter explains how the story of the Great Flood  might have happened.  It is an illustration and not a proof of anything.  To accept any Bible story one must be a person of  faith.  But is it not amazing that several thousand years after the events recorded,  a replica of Noah’s Ark would be constructed off a highway exit in northern Kentucky, and a  million people a  year would show up to see it?  Great works of  faith continue into our  own dark times.

2 thoughts on “David Encounters The Ark”