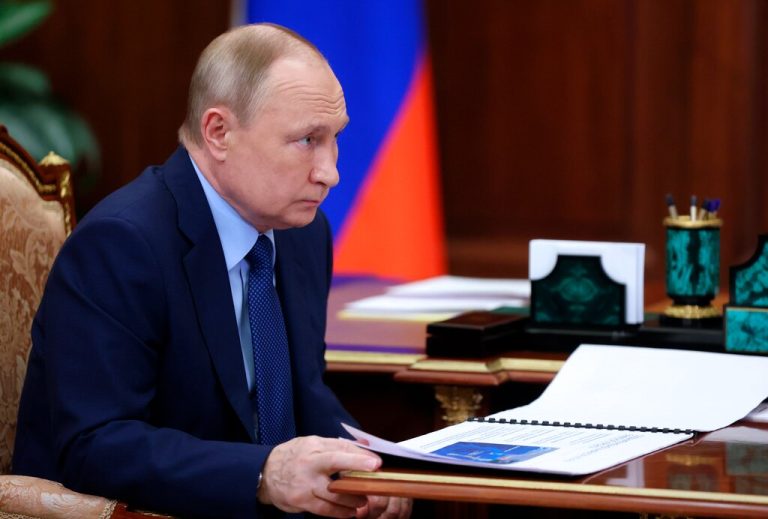 President Joe Biden pledged on Friday to make it “very, very difficult” for Russia’s Vladimir Putin to take military action in Ukraine as U.S. intelligence officials determined that Russian planning is underway for a possible military offensive that could begin as soon as early 2022.

The new intelligence finding estimates that the Russians are planning to deploy an estimated 175,000 troops and almost half of them are already deployed along various points near Ukraine’s border, according to a Biden administration official who spoke on the condition of anonymity to discuss the finding.

It comes as Russia has picked up its demands on Biden to guarantee that Ukraine will not be allowed to join the NATO alliance.

The official added that the plans call for the movement of 100 battalion tactical groups along with armor, artillery and equipment.

Intelligence officials also have seen an uptick in Russian propaganda efforts through the use of proxies and media outlets to denigrate Ukraine and NATO ahead of a potential invasion, the official said.

Asked about the intelligence finding as he set out for the presidential retreat at Camp David on Friday evening, Biden reiterated his concerns about Russian provocations.

“We’ve been aware of Russia’s actions for a long time and my expectation is we’re gonna have a long discussion with Putin,” Biden said.

The risks of such a gambit for Putin, if he actually went through with an invasion, would be enormous.

U.S. officials and former U.S. diplomats say while Putin clearly is laying the groundwork for a possible invasion, Ukraine’s military is better armed and prepared today than in past years, and the sanctions threatened by the West would do serious damage to Russia’s economy. It remains unclear if Putin intends to go through with what would be a risky offensive, they say.

Earlier Friday, Biden pledged to make it “very, very difficult” for Putin to take military action in Ukraine and said new initiatives coming from his administration are intended to deter Russian aggression.

“What I am doing is putting together what I believe to be will be the most comprehensive and meaningful set of initiatives to make it very, very difficult for Mr. Putin to go ahead and do what people are worried he may do,” Biden told reporters.

The Kremlin said Friday that Putin would seek binding guarantees precluding NATO’s expansion to Ukraine during the call with Biden. But Biden sought to head off the demand.

Meanwhile, Ukrainian officials also warned that Russia could invade next month. Ukrainian Defense Minister Oleksii Reznikov told lawmakers Friday that the number of Russian troops near Ukraine and in Russia-annexed Crimea is estimated at 94,300, warning that a “large-scale escalation” is possible in January. U.S. intelligence officials estimate closer to 70,000 troops are deployed near the border, according to an unclassified intelligence document obtained Friday by The Associated Press.

The intelligence findings were first reported by The Washington Post.

There are signs that the White House and Kremlin are close to arranging a conversation next week between Biden and Putin. Putin’s foreign affairs adviser Yuri Ushakov told reporters Friday that arrangements have been made for a Putin-Biden call in the coming days, adding that the date will be announced after Moscow and Washington finalize details. The Russians say a date has been agreed upon, but declined to say when.

Biden and Ukrainian President Volodymyr Zelenskyy have also tentatively agreed to have a call next week, according to a person close to the Ukrainian president who was not authorized to speak publicly and spoke on condition of anonymity.

White House press secretary Jen Psaki said administration officials have “engaged in the possibility” of a Biden-Putin call. White House officials did not respond to a request for comment on the expected Zelenskyy call.

“It certainly would be an opportunity to discuss our serious concerns about the bellicose rhetoric, about the military buildup that we’re seeing on the border of Ukraine,” Psaki said of a potential Biden-Putin call.

Biden did not detail what actions he was weighing. But Russian Foreign Minister Sergey Lavrov, who met Thursday with Secretary of State Antony Blinken in Sweden, said the U.S. has threatened new sanctions. He did not detail the potential sanctions but suggested the effort would not be effective.

“If the new ‘sanctions from hell’ come, we will respond,” Lavrov said. “We can’t fail to respond.”

Psaki said the administration would look to coordinate with European allies if it moved forward with sanctions. She noted that bitter memories of Russia’s 2014 annexation of Crimea, the Black Sea peninsula that had been under Ukraine’s control since 1954, are front of mind as the White House considers the way forward.

“We know what President Putin has done in the past,” Psaki said. “We see that he is putting in place the capacity to take action in short order.”

Deep differences were on display during the Blinken-Lavrov meeting, with the Russia official charging the West was “playing with fire” by denying Russia a say in any further NATO expansion into countries of the former Soviet Union. Zelenskyy has pushed for Ukraine to join the alliance, which holds out the promise of membership but hasn’t set a a timeline.

Blinken this week said the U.S. has “made it clear to the Kremlin that we will respond resolutely, including with a range of high-impact economic measures that we’ve refrained from using in the past.”

Such a move would go far toward blocking Russian businesses from the global financial system. Western allies reportedly considered such a step in 2014 and 2015, during earlier Russian-led escalations of tensions over Ukraine.

Then-Russian Prime Minister Dmitry Medvedev said it would be tantamount to “a declaration of war.”

But some U.S. government officials say Putin also could be seeking attention and concessions from Biden and other Western leaders, using the military escalation to force Russia back into a central role in world affairs as it had in the days of the Soviet Union.

“They are seriously envious for superpower status and … the parity to the United States that existed during the Cold War. That’s what this is all about,” said John Herbst, a former U.S. ambassador to Ukraine.

An invasion is possible, but more likely, “they provoke a crisis, they get concessions from us, and then they reduce the crisis. Right? And that, I think, is probably their objective,” Herbst said Friday.