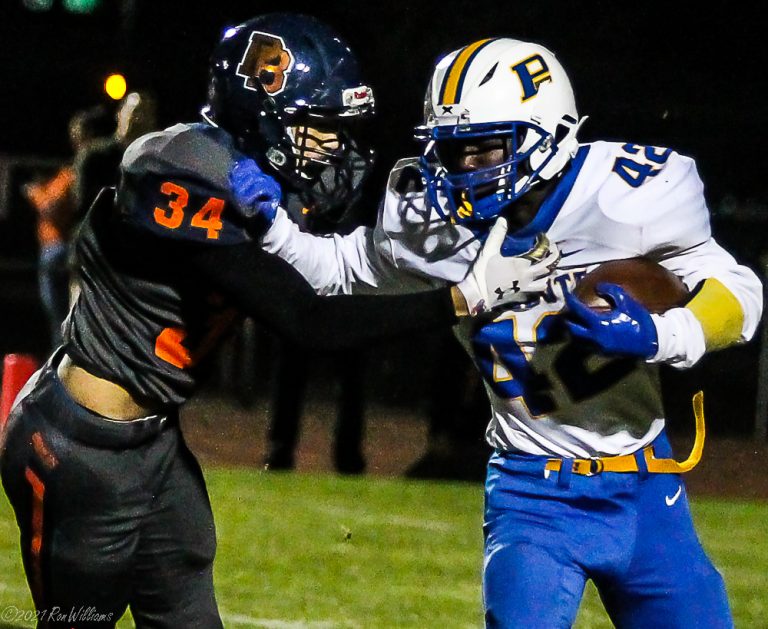 The Poston Butte Broncos scored on five of six first half possessions, en route to an easy 49-7 win over the Prescott Badgers, in the quarterfinals in the 4A state playoffs.

The season ending scenario was much like last season, when Prescott got thrashed at Cactus 59-7.

The Badgers were perfect on the road coming into this one, and on a real high, after knocking Bradshaw Mountain out of the playoffs in the first-round last week. That should have carried over into this week, but somewhere in the translation, it did not. Poston Butte meanwhile, had to come back to beat a (3-7) Northwest Christian team, 39-37 just to get to this game.

The Broncos took the opening kickoff and moved the ball down the field with a good mix of rushing and passing plays. The Badger defense had them at a 3rd and 1 near midfield but gave up a big pass play setting up the first score. Quarterback Drew Dalmacio kept the ball and took it outside, just getting inside the pylon for the TD at the 9:11 mark.

Once again, the Badgers went three and out, giving the ball back to Poston Butte at their own 25. Justin Evans, the senior running back for the Broncos produced some strong runs, setting up the second score. This time Drew Dalmacio had to scramble for his life, as he went sideline to sideline before finding Connor Lopez in the end zone for the 8 yard score.

The first quarter ended on a sack by Thomas Luna, who took down Badger quarterback Jaxon Rice, resulting in a 4th and 18, and a quarter to forget for the visitors. The Prescott faithful who made the long trip tried to light a fire under the team, but all they got was smoke.

Things did not get any better for the Badgers in the second quarter, as Prescott continued to be outplayed by the Broncos.

Poston Butte moved the ball for 50 yards, capped off by a 4 yard run by Justin Evans to increase the lead to 21-0, with 9:25 left in the half. The Badgers gave the ball right back when Cody Leopold lost the ball in a pile up at the Badger 24. After a penalty, the Broncos scored yet again on a 30 yard scoring strike from Dalmacio to Keith Gray, and it was 28-0.

Prescott picked up their initial first down with 6:22 left in the half, and into Bronco territory for the first time on an 8 yard run by Cervando Vega. After turning the ball over on downs, the Badger defense picked up a small victory, stopping Poston Butte for the first time with 2:30 remaining in the second quarter, at the Badger 36. Prescott once again was forced to punt, giving the ball back to the Broncos at midfield with :56 left. It really looked like Prescott would get out of the first half down by four touchdowns, but Dalmacio hit Gray again, this time on a 35 yard TD pass with just :01 left in the first half.

The second half was just a formality. Poston Butte let their foot up off the gas pedal, but still managed to score a touchdown on a pick-six, as a tipped pass thrown by Jaxon Rice fell into the arms of Amari Gilmore, who bolted 48 yards for the score with 6:53 left in the third quarter.

Prescott had their first real drive of the game as the quarter came to an end but turned the ball over on downs at the Poston Butte 13.

The Broncos final score came with 10:56 left in the game as Gaven Thrower found a hole in the defense, running 76 yards for the score.

The Badger goose egg finally came off the board with 5:40 left as Cervando Vega hit pay dirt from 5 yards out, and Cole Gross added the extra point as the Prescott football season came to an end. Badger rushing leader Cody Leopold was held to just 18 yards, and finished his junior season with 1389 yards and 17 touchdowns. Sophomore Jaxon Rice was under a great deal of pressure all night by the Broncos, completing four passes for 30 yards. Maurea Norris led the Badger ground game with 63 yards.

Poston Butte moves on to face Glendale at home Friday. The Badgers end their season at (8-4), after starting the season with four straight wins. Next season looks promising with a majority of the starters coming back from an 8 win season, the most wins since 2006, when Coach Lou Beneitone’s team went (9-3).

The Wildcats opened up a 28-0 lead. Gerardo Saenz completed 25-43 for 389 yards and 4 touchdowns, and two picks. Andrew Morris caught 9 passes for 140 yards, 1 TD, and Carter Wojcik pulled in 6 for 152 yards and 3 TDs. Blake Corner rushed for 106 yards, as the Wildcats opened up a 27-0 lead. The Volunteers didn’t quit, scoring a TD in each of the final quarters, as their best season in school history ended at (8-4).

What turned out to be the game of the night, did not start out that way. Casa Grande opened up a 28-7 lead in the third, before St. Mary’s made their move. The Knights rallied to take a one-point lead 29-28, with just under a minute to play on a one yard TD, and two-point conversion by David Galino.  The Cougars Angel Flores connected with Kevin White to the St. Mary’s 32 yards line, setting up a 35 yard game winning field goal by Joshua Villa as time ran out.

Dorados sophomore Kayden Luke rushed for 183 yards and two touchdowns, and junior quarterback Caden Dawes completed 11 -16 for 151 yards in the road loss. Glendale, led by dual threat QB Zecheriah Owens, will face Poston Butte next with the Cardinals only loss coming to Prescott in week one.