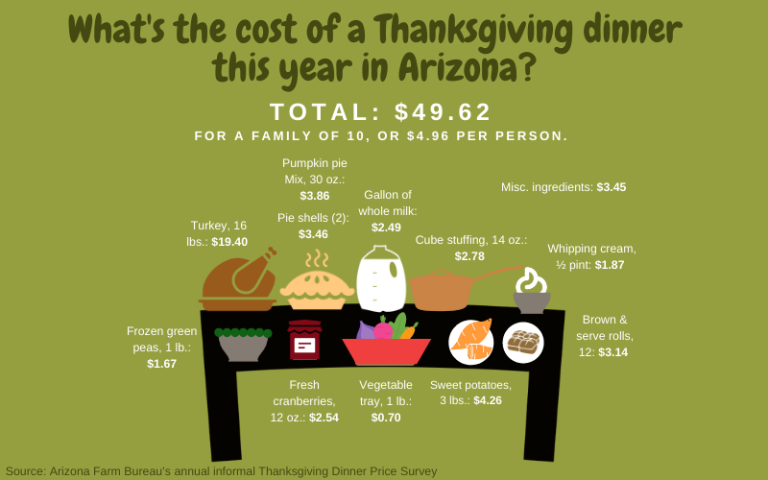 The average price of a Thanksgiving feast for 10 people is $53.31, up $6.41 from last year, according to the American Farm Bureau Federation’s annual price survey. The higher prices are pretty much across the board: turkey, cranberries, frozen dinner rolls and pie crusts.

But the price hike isn’t as steep in Arizona, where turkey and trimmings this year will cost $2.50 more than last year, according to the Arizona Farm Bureau.

Veronica Nigh, the Farm Bureau Federation’s senior economist, said in a statement that factors contributing to the rise “include dramatic disruptions to the U.S. economy and supply chains over the last 20 months; inflationary pressure throughout the economy; difficulty in predicting demand during the COVID-19 pandemic and high global demand for food, particularly meat.”

“We are talking about $6 a person,” George Frisvold, professor of Agricultural and Resource Economics at the University of Arizona, said of the national cost. “Go to a fast food place and see what they are walking out with.”

“You may be seeing a higher price in certain food groups in your local grocery store,” Stefanie Smallhouse, Arizona Farm Bureau president, said in a statement, “but the costs to produce those items has increased exponentially, including fuel and transportation costs. And because of the complexities of our food system, the average farmer is not generally getting more money for their product.

“Even with the increase in food costs, Arizonans will still be spending a smaller portion of their family budget on food than anywhere else in the world.”

Despite the price jump, Arizonans can take heart knowing their meal will cost less than the national average.

“Americans are kind of spoiled,” said Frisvold at UArizona, “because we actually spend way less, as a share of our income on food, than anywhere else. And that is something to be thankful for.”

PrevPreviousAmericans are spending but inflation casts pall over economy
NextOpinion: Having a Happy Thanksgiving? Thank Capitalism.Next