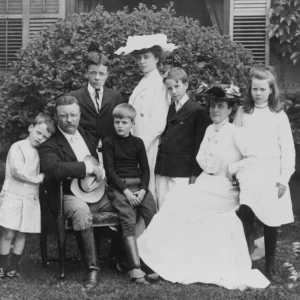 Call it the first ‘Fake News’ White House feud. And it arrived just in time for the holiday season. Of 1904.

In the early days of the 20th century, Theodore Roosevelt’s brood burst into the White House in a whirlwind of activity unseen since Tad and Willie Lincoln ran wild there 50 years earlier. The children were, to use the polite wording of the day, rambunctious. The country was fascinated by its youthful president (he was 46 at the time) and his six energetic offspring. They made good copy, in newspaper jargon.

For example, they gave The Boston Herald a colorful story a few days before Thanksgiving. It described how when a live turkey was delivered to the White House for the First Family’s feast, the youngest Roosevelt kids gleefully chased it around the grounds. They tormented the animal and even plucked its feathers as it ran. TR supposedly watched the scene with great amusement.

Not content to let a good thing go, a Herald columnist called “The Chatterer” wrote the next day, “Apparently the Roosevelt children are chips off the old block and possess their full share of juvenile irresponsibleness. But why should they be allowed to torment and frighten an innocent turkey?”

But Teddy wasn’t laughing when the story reached his desk. In fact, he blew a gasket.

He was so worked up, he ranted about it during a Cabinet meeting, where his agriculture secretary helpfully pointed out it’s impossible to pluck a running turkey’s feathers.

The whole thing was a lie, the president growled. He explained the bird had arrived dead, dressed, and ready to cook, so his kids couldn’t have chased it, much less pulled off its feathers. Roosevelt vowed he would “stop newspaper stories of that kind.”

So, early that same evening the White House press shop issued a news release saying, “No such incident as that recited in the Herald has ever taken place since the president has been in the White House.” It went on to say the story, “marks the culmination of a long series of similar falsehoods, usually malicious and always deliberate, which have appeared in the news columns of the Boston Herald.”

And it didn’t stop there. Teddy was so furious, he banned the reporter who wrote the original account from the White House and instructed all federal agencies to give the Herald the silent treatment.

Painted into a journalistic corner, the newspaper fired back. It made a half-hearted mea culpa by admitting, “…the Herald finds that it has been the means of circulating statements which have no foundation in truth.” Then it proceeded to point out Roosevelt had made several erroneous statements. A rival paper called the apology “a trifle sarcastic.”

Now it was on in earnest as newspapers around the country weighed in. Minnesota’s St. Paul Globe opined, “It is an outrage that a public man should be pilloried through his children.” In the bombastic Southern manner of the era, the Charleston, S.C. Post took it a step further saying the reporter should be “condemned to be shot from the mouth of a cannon on the Washington Monument.”

But it ceased being a laughing matter when the U.S. Weather Bureau in Boston stopped giving the Herald its weather maps and New England forecasts.

That was too much even for Roosevelt supporters, who began criticizing him for going too far. The Manchester Union in New Hampshire got straight to the point, calling the president’s response, “censorship and nothing else.”

Maybe the Yuletide spirit brought a little peace on earth and goodwill toward men that season. Because as December drew to a close, the crisis quietly faded away. The whole laughable incident concluded with a chuckle.

The Chicago Tribune ended the saga the day after Christmas with one of the best one-line news reports of all time: “There were no White House turkey stories in the esteemed Boston Herald yesterday.”