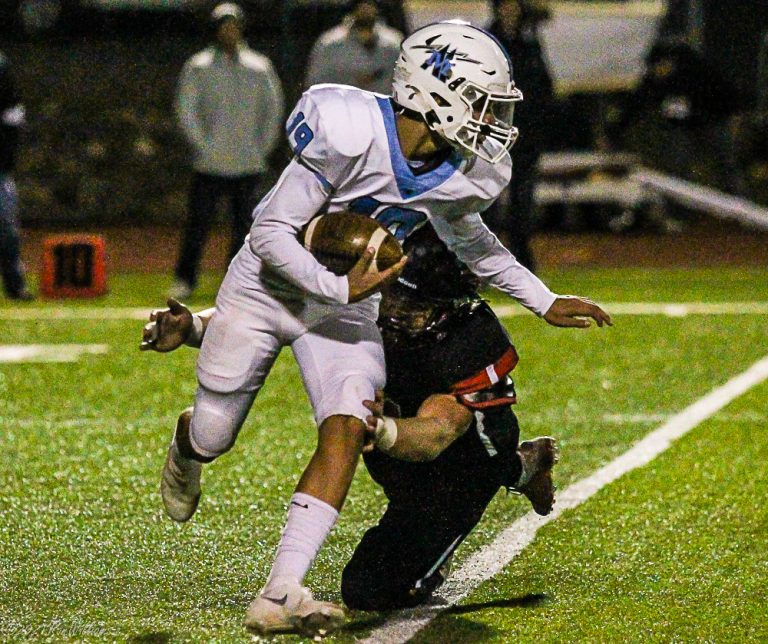 Photo: Quarterback Jayden Thoreson of Mica Mountain gets tackled for a loss by James Giggey

The Badgers remained undefeated on the road with a 49-21 win over the Mingus Marauders in Cottonwood last night. Prescott won only two of five home games this season, but found perfection on the road.

It was a quick start for the Badgers who dominated the first quarter and a half. Jaxon Rice stepped up for injured QB Alex Vaughan, completed 9-13 for 107 yards and 2 TDs, connected on a 36 yard pass play to Jake Hilton for a a 7-0 with 8:05 in the opening quarter. The first offensive play by Mingus was a disaster as Cervando Vega picked up the fumble, taking it to the Marauders 26. The very next play, Cody Leopold, who rushed for 249 yards on 27 carries, scored the first of his four touchdowns on the night on a 26 yard blast. Vega once again was credited for a second fumble recovery, setting up a one yard run by Cian Mckelvey with 4;01 on the first quarter clock, and a 21-0 Badger lead.

The Mingus offense had a lot of trouble early, and the Badger defense appreciated the help in keeping a potent offense off the scoreboard in a rare quarter shutout.

Cody Leopold scored on a two yard run to open the second quarter, and it was 28-0. After yet another stalled drive by Mingus, Jaxon Rice connected on a 15 yard pass play to Christopher Brown with 7:17 left in quarter number two and a 35-0 Badger lead.

The Marauders were finally to show what they had done most of the year, and that was to score points. Mingus QB Zachary Harrson called his own number, running 67 yards on a bootleg to get the goose egg off the board with 7:10 left in the half.

The Badgers fumbled the ball back to Mingus as Joe Freudenreich fell on the loose ball. That set up the next Mingus touchdown, when Harrison connected with Freddy Jimenez from 12 yards to out, to close the gap to 35-14 at the half.

The Marauders made it a little more interesting, scoring to trim the Badger lead to 35-21 with 9:26 in the third, when Angelo Alvarez scored on a two yard run.

The Badgers answered with a strong drive, capped off by a Leopold four-yard touchdown run.

Leopold finished the scoring off with his fourth of the game, and his 16th of the season, with a 33-yard run with 7:40 left in the game. Prescott rushed for 411 yards, averaging 6.5 yards per carry and ended up with 518 total yards.

Malachi Stephenson rushed for two touchdowns to help lead the Bradshaw Mountain Bears to a 36-7 win over the Mica Mountain Thunderbolts in Prescott Valley.

The Thunderbolts in their first year of varsity action, with sophomores and juniors on the roster, scored first setting a school record in the process as quarterback Jayden Thoreson connected on a 99 pass play to Melvin Khan. Ethan Black added the PAT for a 7-0 lead with 7:53 left in the first half.

The Thunderbolts score seemed to wake up the Bears offense. Bradshaw Mountain put together a strong drive that tied the game on a 8 yard run by Malachi Stephenson at the 4:12 mark. The Bradshaw defense, which has been stellar the last five games, allowed no more points.

Both teams had some issues with ball security, and a Mica Mountain fumble set up a scoop and score by Aiden Ott,  as the senior ran for the TD from 17 yards out. Ott was at it again on the next series, recovering a second fumble, setting up a 7 yard touchdown run along the far side line by quarterback Grady Rose to close out the first half.

Halftime by the Bradshaw Mountain Band and Color Guard was quite impressive with their swashbuckling theme that included a Pirate ship. 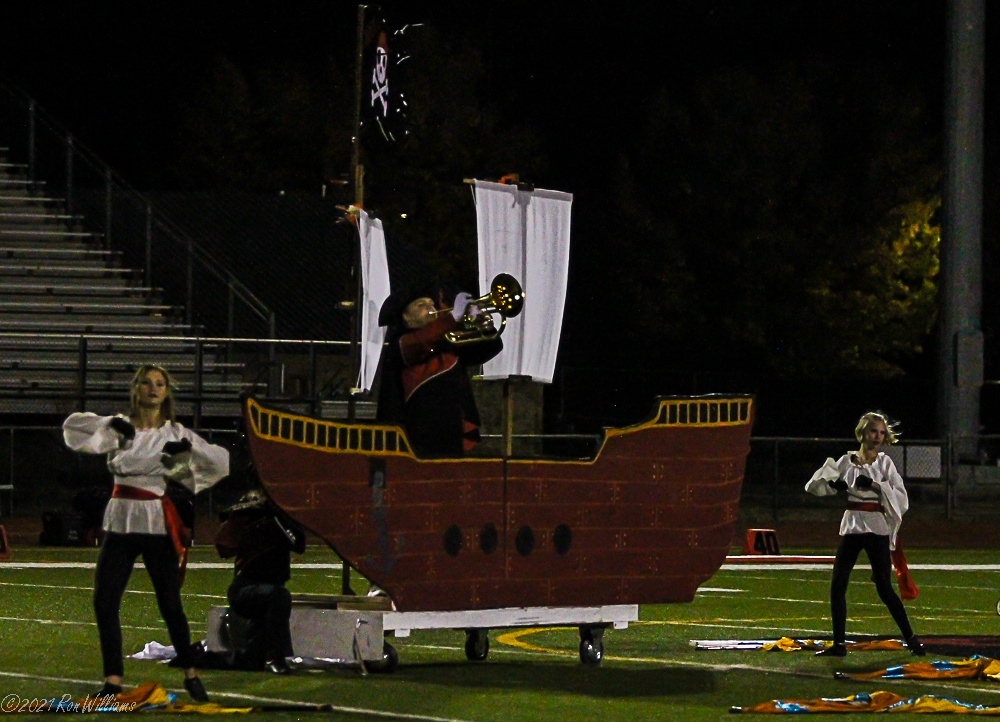 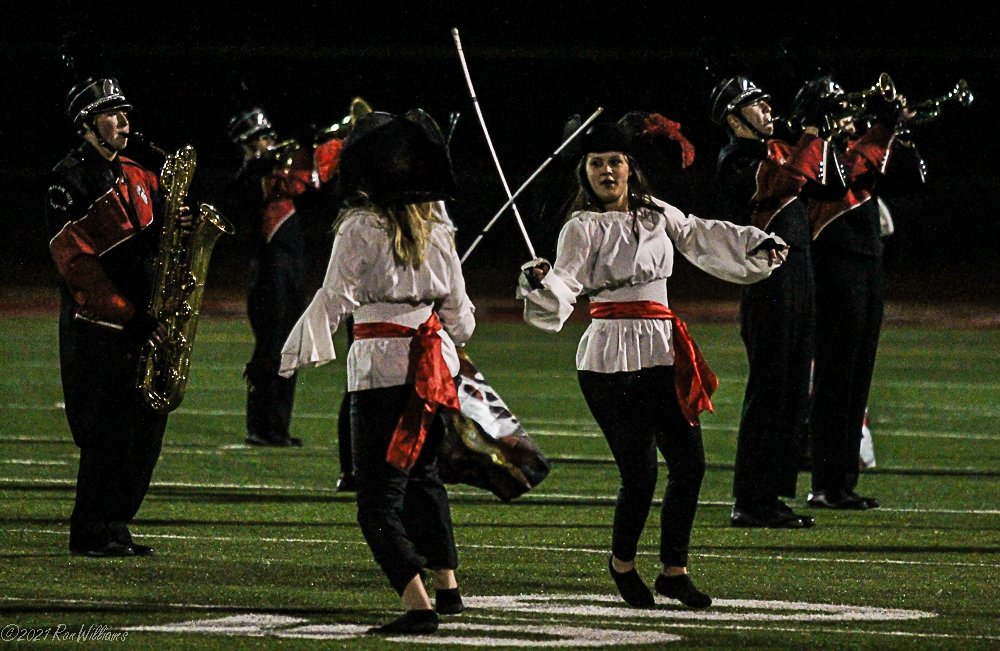 A bad snap over the Mica Mountain punters head that went out of the end zone, gave Bradshaw two points for the safety, and a 23-7 lead with 10:03 left.

The Bears added two touchdowns to close out the game. Gabriel Ricketts who rushed for 102 yards on 20 carries, scored on a 31 yard run at the 5:27 mark, and Malachai Stephenson ran for a 46 yard score with 5:02 left.

The Bears, champions of the Grand Canyon Region, end the regular season at (7-3). Mica Mountain ends the year at (3-3).

The two rivals are paired up to face each other in the first round of the AIA playoffs. Bradshaw beat Prescott 24-6 two weeks ago in Prescott. Despite winning the first game and being Grand Canyon Region champs, the Bears get a road game, in a somewhat weak 4A playoff bracket. Northwest Christian, despite being (3-7) even made the playoffs.

The original top two teams, Cactus and ALA-Queen Creek, both moved up to the Open Division, moving every team up two spots. Otherwise Prescott would have been on the road seeded #10, Bradshaw #11.

A plus for the Grand Canyon Region was getting four teams in. Lee Williams and Coconino also made it. No matter how you slice it though, you have to win to move on. We will all see what the two teams learned the first time, when they meet again Friday at Bill Shepard Field.