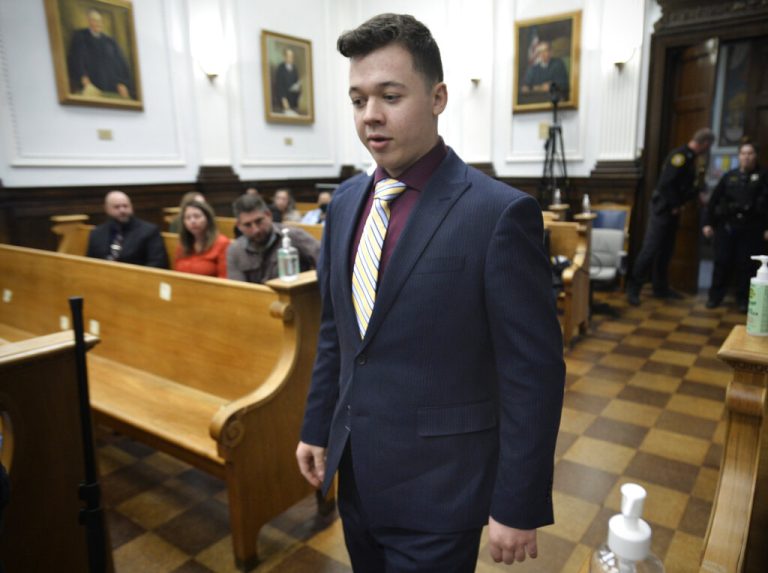 Prosecutors in Kyle Rittenhouse’s murder trial could ask the jury to consider lesser charges when it gets the case, a move that could secure a conviction for some crime but take a possible life sentence off the table.

“He’s got nothing,” Adams said. “I just don’t understand it. What are we doing here? We’re all kind of scratching our heads.”

Rittenhouse shot and killed Joseph Rosenbaum and Anthony Huber and wounded Gaige Grosskreutz during an August 2020 protest against police brutality in Kenosha, a city in southeastern Wisconsin that’s not far from Rittenhouse’s hometown of Antioch, Illinois. Rittenhouse was 17 years old at the time.

He’s also charged with two counts of first-degree reckless endangerment for firing at an unknown man who tried to kick him in the face and allegedly disregarding that a reporter was standing behind Rosenbaum when he shot him. A reckless endangerment charge requires prosecutors to show Rittenhouse put someone in harm’s way with an utter disregard for life. It carries a maximum 12-year prison sentence.

Prosecutors also charged Rittenhouse with a misdemeanor count of being a minor in possession of a firearm. That’s punishable by up to nine months behind bars.

Prosecutors or defense attorneys can ask Judge Bruce Schroeder to inform jurors as they begin deliberations to consider finding Rittenhouse guilty of lesser charges in lieu of the original counts. The judge would then have to weigh whether the evidence the jury had seen supports those lesser charges before instructing the jury to consider them.

Assistant District Attorney James Kraus told Judge Bruce Schroeder on Thursday that prosecutors were still finalizing their request for lesser included charges. But he said they planned to ask the judge to tell the jury to consider lesser counts in Huber’s death and the Grosskreutz shooting.

He said prosecutors were leaning against seeking lesser charges on the reckless endangerment counts and in Rosenbaum’s death but might ask Schroeder to include a so-called provocation instruction. Such an instruction would ask the jury to consider whether Rittenhouse provoked the men into attacking him. If the jury finds he did, that would negate self-defense.

But multiple witnesses have described Rosenbaum as angry and out of control that night, saying they heard him threaten to kill Rittenhouse if he got him alone and challenging other armed people at the protest to shoot him. Video shows Rosenbaum chasing Rittenhouse across a parking lot before Rittenhouse shoots him.

Bystander video of Huber running up to Rittenhouse and hitting him in the head with a skateboard as he apparently reaches for Rittenhouse’s gun has also hurt Binger’s case.

Binger called Grosskreutz to the stand on Monday. Grosskreutz testified he thought Rittenhouse was going to kill him, but on cross-examination he acknowledged that he ran up to Rittenhouse and pointed a pistol at him a split-second after Rittenhouse shot Huber.

“That’s a pretty clear case of self-defense,” said Paul Bucher, a former Waukesha County district attorney who isn’t involved in the case. “When he has a handgun (and) was in the process of pointing it, that would give me great pause as to whether I’d even charge that.”

Rittenhouse testified Wednesday that Rosenbaum threatened to kill him twice, that Huber hit him with the skateboard twice before he shot him, and that Grosskreutz pointed his pistol at him after first raising his hands in a “surrender” gesture.

Rittenhouse said he did what he had to do to protect himself. He cried as he began to describe how Rosenbaum chased him down.

Adams said prosecutors most likely will seek second-degree versions of the intentional homicide charges. Such charges could apply if jurors determined that Rittenhouse sincerely believed his life was in danger but used an unreasonable amount of force, University of Wisconsin-Madison criminal law professor Cecelia Klingele said. Second-degree reckless endangerment could apply if jurors found that he put someone in harm’s way but did so without showing utter disregard for human life, she said.

A life sentence wouldn’t be an option if prosecutors sought convictions on lesser charges, but they would give jurors the flexibility to convict him of something, said Adams.

“It gives the jury negotiation room,” he said. “They think something bad happened but they’re not convinced the level of force was necessary. And that gives prosecutors two kicks at the cat.”

Bucher said Rittenhouse’s team also could ask jurors to consider second-degree versions of the charges in hopes of avoiding a life sentence.

“As a prosecutor, you charge more counts than necessary because you don’t have a strong case,” he said. “You know the old saying, throw as much as you can against the wall and see what sticks. It’s confusing for me. Imagine what it’s like for the jury. You almost need a statute book to go through all this.”

Find AP’s full coverage of the Rittenhouse trial at https://apnews.com/hub/kyle-rittenhouse and follow Todd Richmond on Twitter at https://twitter.com/trichmond1.

PrevPreviousCOVID-19 hot spots offer sign of what could be ahead for US
NextCourt temporarily delays release of Trump’s Jan. 6 recordsNext

1 thought on “EXPLAINER: Could jury weigh lesser charges for Rittenhouse?”