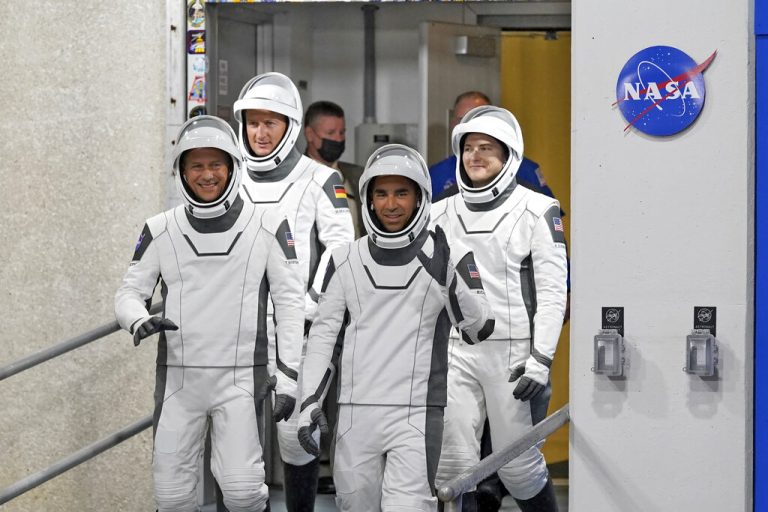 SpaceX counted down Wednesday toward a nighttime launch of four astronauts who have been grounded for nearly two weeks by weather and medical delays.

The Falcon rocket was poised to blast off from NASA’s Kennedy Space Center a few hours after sunset. That would put the one German and three U.S. astronauts at the International Space Station by Thursday night to begin a six-month stay.

It was so drizzly that SpaceX employees held umbrellas over the astronauts as they said goodbye to their families. Their wet helmets were wiped down before they strapped into their seats. Forecasters promised the weather would improve.

One of the astronauts — NASA isn’t saying which one — was sidelined last week by an undisclosed medical issue. The crew member is fully recovered, according to NASA. Officials won’t say whether it was an illness or injury, but noted it wasn’t COVID-19.

The launch attempt comes just two days after SpaceX brought four station astronauts back to Earth. They should have been up there to welcome the station newcomers, but NASA and SpaceX decided to switch the order based on Monday’s ideal recovery weather in the Gulf of Mexico.

A balky parachute during descent had SpaceX engineers poring over the data, before giving the go-ahead for Wednesday’s launch effort. One of the four chutes opened more than a minute late, a problem seen in testing and well within safety limits, SpaceX officials said Tuesday.

Other equipment issues involved the toilet. SpaceX redesigned the flushing system after a major leak occurred on a private flight in September. The capsule returning Monday had the same problem so the crew had to rely on diapers during the eight-hour ride.

A bit of good news: The space station was no longer on a potential collision course with space junk. Late Tuesday, NASA said the station was going to have to dodge a piece of an old Chinese satellite, destroyed years ago in a missile-firing test. But by Wednesday, the debris no longer posed a threat. Mission Control moved the station higher anyway to accommodate visiting Russian vehicles in the coming month.

SpaceX has now launched three crews for NASA in the past 1 1/2 years. The September flight was chartered by a billionaire for himself and three others.

The latest crew: NASA’s Raja Chari, Tom Marshburn and Kayla Barron and the European Space Agency’s Matthias Maurer, who was set to become the 600th person in space.