Opinion: A Crisis of Trust

Like many of you, I am afraid of COVID. More significantly, I am afraid of my government. I am also tired. I’m tired of doomsday reporting that seems more like propaganda than factual news. I’m tired of the wars of words that have erupted on social media. I’m tired of hearing about anti-vaxxers and covidiots, or about sheeple. COVID has made us all tired. It has made us distrustful. It has fractured an already divided nation. It seems to me that our government and media are stoking that division rather than trying to reverse it.

I remember a time when a difference of opinion led to conversation. Those who did not agree were not stupid or evil. We could be honest with one another. Whether or not we agreed at the end of our conversations, we could still respect one another. The politicization of COVID has put that in jeopardy.

COVID has exposed a great weakness in our society: a lack of trust in our leadership, in our government institutions, in the pharmaceutical industry, and now in one another. Since the beginning of the pandemic, I have had questions about the origins of COVID, about the mixed advice we have received, and about the vaccines that appeared in record time. But questions are forbidden in this new America. If you have questions, you are labeled as an extremist or an anti-vaxxer. Compliance must be silent and absolute.

Early in the pandemic, the Trump Administration initiated Operation Warp Speed. The idea was to cut the vaccine production schedule from the standard 5-10 years to something much shorter. Prior to the COVID vaccine, “the fastest vaccine to go from development to deployment was the mumps vaccine in the 1960s, which took about four years.” The COVID vaccine was developed and deployed in less than twelve months.

How was this accomplished? Who allowed the record-breaking vaccine rollout to happen? The US Food and Drug Administration. The same FDA that the AMA Journal of Ethics said contributed to the opioid crisis by prioritizing profits for Purdue Pharma and the Sackler family over the health and safety of Americans. The cozy relationship between the FDA and Big Pharma has led to price gouging for EpiPens, insulin, and many other medicines. The FDA’s regulatory failures have allowed our youth to become a casualty of the vaping industry.

The pharmaceutical giant responsible for the first mRNA vaccine, Pfizer, has a massive fraud settlement in their recent history. By indemnifying Pfizer and the other drug companies from any liability due to adverse reactions from the vaccines, the government has again prioritized profit motives over safety.

Who are we supposed to trust above all others through this? Dr. Anthony Fauci, the United States’ “preeminent expert on infectious diseases.” One revelation after another has diminished his credibility to the point where Members of Congress are calling for his firing. Some have suggested that he be criminally charged.

On December 5, 2020, then President Elect Joe Biden, said of the COVID vaccine(s): “I don’t think it should be mandatory, I wouldn’t demand it be mandatory.” Nine months later, President Biden mandated vaccines for all federal workers and all Americans working for companies with 100 or more employees.

We are a Constitutional Republic, with a Senate and a House of Representatives that are responsible for writing our laws. Congress was designed to be slow and deliberate to ensure that the laws that come out of it are thoughtful and considerate. I am deeply troubled by the executive orders that halted education, crippled the economy, and converted Constitutionally protected Rights into government granted privileges. Agencies that historically were responsible for issuing guidance pivoted to moratoriums and mandates. The vaccine mandate is just the latest instance of authoritarian directives used to compensate for poor leadership and transparency. Washington DC is incapable of persuading the American people. They lost our trust and are now trying to force compliance instead of earning it. 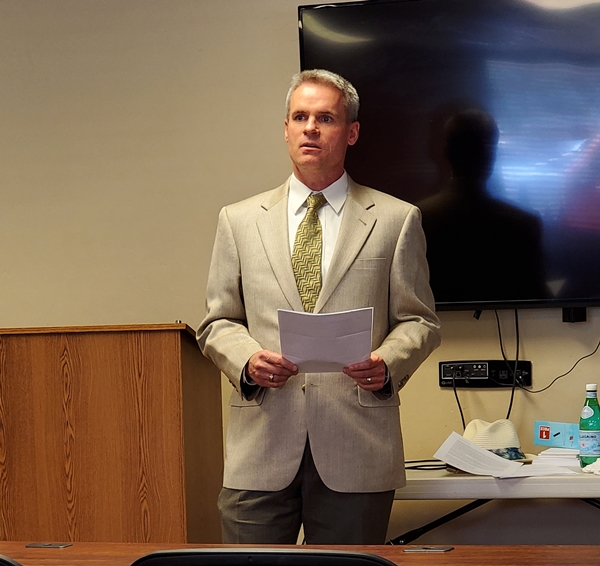 Brad Scott is a local businessman in Prescott.
All Posts »

2 thoughts on “Opinion: A Crisis of Trust”