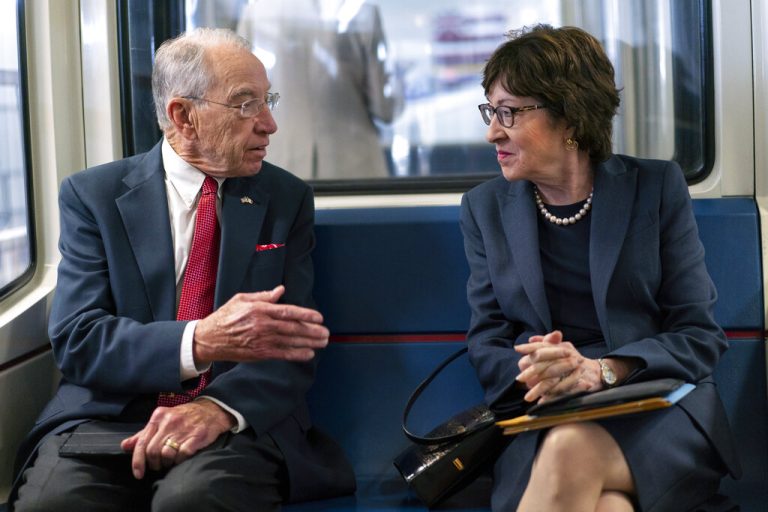 In a bid to hand him a needed victory, leaders prepared to try pushing an accompanying $1 trillion package of road and other infrastructure projects through the chamber and to his desk.

With lawmakers set to leave town for a week’s break, the scrambled legislative plans cast a fresh pall over a party that has tried futilely for weeks to find middle ground on its massive package of health, education, family and climate change initiatives. That’s been hard, in part because the Democrats’ slender majorities mean they need the support of every Senate Democrat and can have no more than three defectors in the House.

The party’s congressional leaders had hoped for House approval of both that measure and the infrastructure bill on Friday. That would have produced twin triumphs for a president and party eager to rebound from this week’s deflating off-year elections and show they can govern.

THIS IS A BREAKING NEWS UPDATE. AP’s earlier story follows below.

Speaker Nancy Pelosi, D-Calif., and other leaders met privately with a handful of centrists who say they want an official cost estimate from the nonpartisan Congressional Budget Office before voting on a 10-year, $1.85 trillion social and environment bill. Democrats can lose no more than three votes in the narrowly divided House to pass the legislation.

Biden, meeting reporters to tout a strong monthly jobs report, said he was returning to the Oval Office “to make some calls” to lawmakers. He said he would ask them to “vote yes on both these bills right now.”

Leaders want to pass that legislation, and a separate five-year, $1 trillion package of road and other infrastructure projects, to quickly notch accomplishments just days after a gubernatorial election defeat in Virginia and disappointing contests elsewhere. They also want the votes to occur before Congress leaves by the weekend for a week-long recess.

Leaders have said complete CBO figures won’t be available for days or more. “We’re working on it,” House Majority Leader Steny Hoyer, D-Md., said of the talks. By late morning, a House procedural vote was underway that started over three hours earlier as behind-the-scenes discussions continued.

House passage of Biden’s larger measure would send it to the Senate, where it would face certain changes and more Democratic drama. That’s chiefly because of demands by Sens. Joe Manchin of West Virginia and Kyrsten Sinema of Arizona to contain the measure’s costs and curb or drop some of its initiatives.

But House approval of the smaller, bipartisan infrastructure measure would send it directly to the White House, where Biden would be certain to take a victory lap. That bill, projected to create mountains of jobs, had been blocked by House progressives to pressure moderates to back the larger family and climate change legislation.

Pelosi met late Thursday with Hispanic lawmakers wanting the larger measure to go as far as possible in helping immigrants remain in the U.S. Their prospects for bold action are limited by strict Senate rules, though. Rep. Adriano Espaillat, D-N.Y., said Friday that they’d discussed moving on the issue in other bills and considered Pelosi an ally.

After months of negotiations, House passage of the big bill would be a crucial step, sending to the Senate Biden’s effort to expand health care, child care and other social services and deliver a huge investment to fight climate change.

Alongside the slimmer roads-bridges-and-broadband package, it adds up to Biden’s answer to his campaign promise to rebuild the country from the COVID-19 crisis and confront a changing economy.

Pelosi’s strategy seemed focused on passing the most robust bill possible in her chamber and then leaving the Senate to adjust or strip out the portions its members won’t agree to. In late tweaks to the bill to nail down votes, the House Rules Committee approved revisions to a state-and-local tax deduction and other issues.

Half the size of Biden’s initial $3.5 trillion package, the bill exceeds 2,100 pages and has support progressive lawmakers, even though it is smaller than they wanted. But the chamber’s more centrist and fiscally conservative Democrats continued to mount objections.

Republicans opposed the measure as too expensive and damaging to the economy.

Overall the package remains more far-reaching than any other in decades. It would provide large numbers of Americans with assistance to pay for health care, raising children and caring for elderly people at home.

There would be lower prescription drug costs, limiting the price of insulin to $35 a dose. Medicare for the first time would be able to negotiate with pharmaceutical companies for lower prices for some other drugs, a long-sought Democratic priority.

Medicare would have a new hearing aid benefit for older Americans, and those with Medicare Part D would see their out-of-pocket prescription drug costs capped at $2,000.

The package would provide some $555 billion in tax breaks encouraging cleaner energy and electric vehicles, the nation’s largest commitment to tackling climate change.

With a flurry of late adjustments, the Democrats added key provisions in recent days — adding back a new paid family leave program and work permits for immigrants. Late changes Thursday would raise a $10,000 cap on state-and-local tax deductions to $80,000.

Much of the package’s cost would be covered with higher taxes on wealthier Americans, those earning more than $400,000 a year, and a 5% surtax would be added on those making over $10 million annually. Large corporations would face a new 15% minimum tax in an effort to stop big businesses from claiming so many deductions that they end up paying zero in taxes.

Democrats have been working to resolve their differences, particularly with senators Manchin and Sinema, who forced cutbacks to Biden’s bill but championed the slimmer infrastructure package that had stalled amid deliberations.

Manchin has panned the new family and medical leave program, which is expected to provide four weeks of paid time off after childbirth, for recovery from major illness or for caring for family members, less than the 12-week program once envisioned.

Senators are also likely to strip out a just-added immigration provision that would create a new program for some 7 million immigrants who are in the country without legal standing, allowing them to apply for permits to work and travel in the U.S. for five years. It’s not clear that addition would pass muster with the Senate parliamentarian under special budget rules being used to process the package.