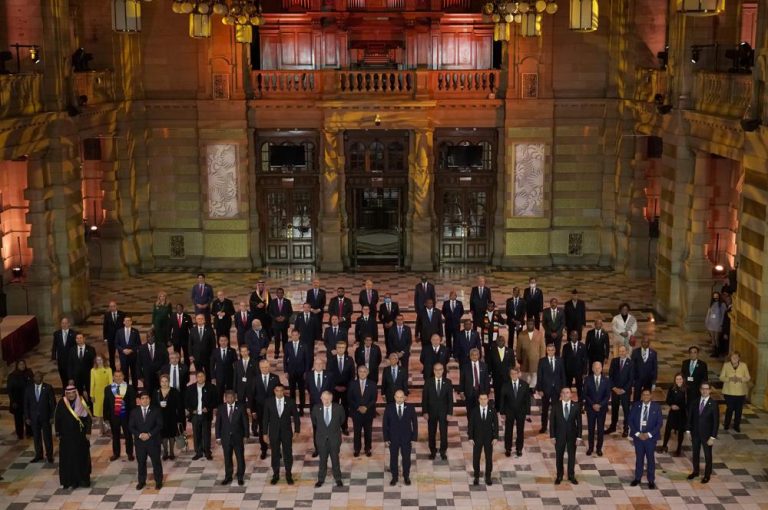 World leaders turned up the heat and resorted to end-of-the-world rhetoric Monday in an attempt to bring new urgency to sputtering international climate negotiations.

The metaphors were dramatic and mixed at the start of the talks, known as COP26. British Prime Minister Boris Johnson described global warming as “a doomsday device” strapped to humanity. United Nations Secretary-General António Guterres told his colleagues that humans are “digging our own graves.” And Barbados Prime Minister Mia Mottley, speaking for vulnerable island nations, added moral thunder, warning leaders not to “allow the path of greed and selfishness to sow the seeds of our common destruction.”

Amid the speeches, Indian Prime Minister Narendra Modi said his coal-dependent country will aim to stop adding greenhouse gases to the atmosphere by 2070 — two decades after the United States and at least 10 years later than China. Modi said the goal of reaching “net zero” by 2070 was one of five measures India planned to undertake to meet its commitments under the Paris climate accord.

“There’s no more time to sit back,” Biden said in a more measured warning that also apologized for his predecessor’s decision to temporarily pull the U.S. out of the historic 2015 Paris agreement, something he said put the country behind in its efforts. “Every day we delay, the cost of inaction increases.”

In a recorded welcome message, Queen Elizabeth II said she hoped the conference would be “one of those rare occasions where everyone will have the chance to rise above the politics of the moment.”

“History has shown that when nations come together in common cause, there is always room for hope,” she said in the video, which was recorded on Friday at Windsor Castle.

One of the United Nations’ biggest concerns is that some countries are more focused on amorphous long-term net-zero goals instead of seeking cuts this decade that could prevent temperature increases that would exceed the Paris goal.

Modi also outlined shorter-term goals for the world’s third-biggest carbon emitter: raising its goal for non-fossil energy production, meeting half of its energy needs with renewable sources, cutting carbon emissions by 1 billion tons compared with previous targets and reducing the carbon intensity of its economy by 45% — all by 2030.

While 2070 sounds far off for India’s pledge, four outside experts from think tanks and universities said India’s new short- and long-term goals are significant, while not huge, because of that nation’s development status. Ulka Kelkar, who directs India climate policy analysis for the World Resource Institute, said a lot depends on details, but the 2070 goal would be similar to the U.S. and Europe adopting net-zero goals 20 years ago.

European Commission President Ursula von der Leyen touted already announced efforts to make Europe “the first net-zero continent” in the long-term and cut emissions 55% in this decade. She pushed for other rich countries to aid poorer nations as much as Europe does and put a price on carbon emissions because “nature cannot pay that price anymore.”

Bolivia President Luis Arce said the speeches from developed countries sought to portray them as climate change leaders “but this is far from the truth.” He said rich nations need to face their historic responsibilities for causing the warming problem and not fix it by forcing rules on poor countries. The real solution, he said, “is an alternative to capitalism” and “unfettered consumerism.”

Johnson pointed out that the 130-plus world leaders gathered for the leaders’ summit portion of the conference had an average age of over 60, while the generations most harmed by climate change aren’t yet born.

“Change is not going to come from inside there,” Thunberg said, “We say no more blah, blah, blah.”

The conference aims to get governments to commit to curbing carbon emissions fast enough to keep global warming to 1.5 degrees Celsius (2.7 degrees Fahrenheit) above pre-industrial levels. The world has already warmed 1.1 degrees Celsius (2 degrees Fahrenheit). Current projections based on planned emissions cuts over the next decade are for it to hit 2.7C (4.9F) by the year 2100.

Increased warming over coming decades would melt much of the planet’s ice, raise global sea levels and greatly increase the likelihood and intensity of extreme weather, scientists say. With every tenth of a degree of warming, the dangers soar faster, they say.

The other goals for the meeting are for rich nations to give poor nations $100 billion a year in climate aid and to reach an agreement to spend half of the money to adapt to worsening climate impacts.

But Mottley, of Barbados, warned that negotiators are falling short.

“This is immoral and it is unjust,” Mottley said. “Are we so blinded and hardened that we can no longer appreciate the cries of humanity?”

“We are already gasping for survival,” chimed in President Wavel John Charles Ramkalawan of the Seychelles, another island nation. “Tomorrow is not an option for it will be too late.”

“We are digging our own graves,” said the U.N. secretary-general. “Our planet is changing before our eyes — from the ocean depths to mountaintops, from melting glaciers to relentless extreme weather events.”

The speeches will continue through Tuesday, then the leaders will leave.

The idea is that they will do the big political give-and-take, setting out broad outlines of agreement, and then have other government officials hammer out the details. That’s what worked to make the historic 2015 Paris climate deal a success, former U.N. Climate Secretary Christiana Figueres told The Associated Press.

“For heads of state, it is actually a much better use of their strategic thinking,” Figueres said.

Thousands lined up in a chilly wind in Glasgow on Monday to get through a bottleneck at the entrance to the venue. But what will be noticeable are a handful of major absences.

Xi Jinping, president of top carbon-polluting nation China, is not in Glasgow. Figueres said his absence is not that significant because he isn’t leaving the country during the pandemic and his climate envoy is a veteran negotiator.

Biden has chided China and Russia for their less-than-ambitious efforts to curb emissions and blamed them for a disappointing statement on climate change at the end of the meeting of leaders from the Group of 20 major economies in Rome this weekend.

Perhaps more troublesome for the U.N. summit is the absence of several small nations from the Pacific islands that couldn’t make it because of COVID-19 restrictions and logistics. That’s a big problem because their voices relay urgency, Figueres said.

In addition, the heads of several major emerging economies beyond China are also skipping Scotland, including those from Russia, Turkey, Mexico, Brazil and South Africa. That leaves Modi the only leader present from the so-called BRICS nations, which account for more than 40% of global emissions.

PrevPreviousSenator Wendy Rogers to Speak to Verde Valley Republicans
NextEXPLAINER: Why voting is a top issue in Tuesday’s electionsNext