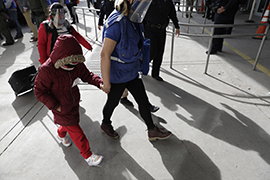 The Department of Homeland Security said Friday it will end the Migrant Protection Protocols, its second attempt to reverse the Trump-era “remain in Mexico” policy that makes asylum seekers wait in Mexico while their cases are considered.

In a memo issued Friday, DHS Secretary Alejandro Mayorkas conceded that the policy “likely contributed to reduced migratory flows” at the southern border. But he said it drained too many agency resources from other border efforts to impose a policy that came at “unjustifiable human costs” for migrants affected.

It’s the second time in five months that DHS has said it will end MPP, after the first effort, in June, was overturned by a federal district judge who ordered the agency to reinstate the program. That order remains in place for now and Mayorkas said the government will abide by that ruling – essentially working to reinstate MPP even as it works to do away with the policy.

Critics of MPP, like Vicki Gaubeca, director of Southern Border Communities Coalition, said it was “ridiculous that this program was even ever started. It’s, you know, the idea of somebody who’s very anti-immigrant that got implemented.”

But Ira Mehlman, media director at the Federation for American Immigration Reform, said that the program should not have been shelved in the first place, and should be brought back as soon as possible.

“If the Biden administration actually carries through in this, and they’ve given every indication that they’re going to drag their feet,” Mehlman said Friday, before Mayorkas’ memo was released, “it would be a very valuable tool in cutting off the flow of people coming across that border illegally.”

Jessica Bolter, associate policy analyst for the Migration Policy Institute, said reinstating MPP “is going to make it much more difficult for migrants … to access legal counsel and to win relief in immigration courts” after being sent back to Mexico.

The Migrant Protection Protocols were started by President Donald Trump’s administration during the last surge of migrants at the border, in 2019. Under the policy, immigrants who show up at the southern border seeking asylum will have their claims processed – but they have to go back across the border and wait in Mexico for a hearing, instead of being allowed to wait in the U.S. as had been the practice.

Critics said the policy violated international laws regarding asylum seekers, and that it put already vulnerable migrants into dangerous situations by forcing them into makeshift camps that were plagued by health, sanitation and violence problems.

A 2019 report by Human Rights First reported more than 600 attacks, including rapes, robberies and kidnappings of migrants who had been turned away under the remain in Mexico policy.

Biden ordered a study of the program’s effectiveness within days of taking office this year, and Mayorkas responded on June 1 with a memo that “remain in Mexico” should be ended. But the states of Texas and Missouri went to court to have the policy reinstated, arguing that Mayorkas failed to follow proper procedures when he moved to end the policy.

A U.S. District Court in Texas agreed, ordering the government to enforce the MPP “in good faith” until it had followed proper procedures to end it or “until such time as the federal government has sufficient detention capacity to detain” all immigrants subject to detention. Both the 5th U.S. Circuit Court of Appeals and the Supreme Court refused in August to block that ruling.

DHS said at the time that it would “vigorously challenge” the district court’s ruling, but that it would work to implement MPP in the meantime.

As of Friday, however, the policy had not been reinstated, in part because the U.S. has not been able to get the Mexican government to agree to accept migrants who are turned away at the U.S. border.

“Mexico has made clear that it will not agree to accept those the United States seeks to return to Mexico under MPP unless substantial improvements are made to the program,” Mayorkas said in his order, which said the program “has put a strain on U.S.-Mexico relations.”

He said negotiations over the policy have “played a particularly outsized role in diplomatic engagements with Mexico,” distracting from efforts to jointly fight cross-border crime and smuggling and “address the root causes of migration.”

In a 39-page document accompanying his memo, Mayorkas detailed his efforts to fully review the policy and meet with all parties before deciding that “the benefits of MPP are far outweighed by the costs.”

That document also cited alternative efforts by the Biden administration, including additional judges and changes to the asylum docket aimed at speeding asylum claim processing, and programs to deal with the root causes of migration that drive people to leave their home countries in the first place.

Mehlman said the Biden administration “has bent over backwards to appease the open borders crowds, in spite of the fact that polls tell us that two thirds of the American public disagrees.”

But Gaubeca does not think the administration has done enough to “reverse some of the damaging policies of Trump,” but she hopes to see a change.