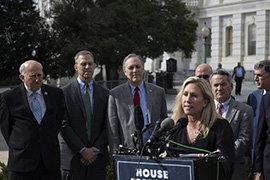 Democratic leaders announced Thursday that they reached agreement on a $1.75 trillion “framework” for their Build Back Better plan, a sweeping social and environmental spending plan that would increase funding for everything from child care to Medicare.

The deal is the latest step in a months-long fight between progressive and moderate Democrats, who had objected to the original 10-year, $3.5 trillion plan. But few were rushing to embrace the framework Thursday, with many progressives pointing instead to what was left out.

Sen. Kyrsten Sinema, D-Ariz., one of the key moderates opposing the original plan, tweeted only that “I look forward to getting this done.” For Republicans, the plan is still too big, too invasive and too costly.

But many more appeared to be like Rep. Ann Kirkpatrick, D-Tucson, who tweeted that while the deal does not include everything she wanted to see, “We need to pass this infrastructure package and the #BuildBackBetter Act ASAP.”

That was the message delivered by President Joe Biden after a morning meeting with the House Democratic Caucus, who said that even at the reduced level the agreement provides “a historic economic framework.”

“No one got everything they wanted, including me,” Biden said. “But that’s what compromise is, that’s consensus.”

The agreement unveiled Thursday includes $555 billion for clean energy and climate investments, according to a White House breakdown of the plan, as well as $400 billion for child care and universal preschool. It would expand Medicare to cover hearing care, provide $150 billion for home care services for the elderly and disabled, and extend $200 billion in child tax credits and the Earned Income Tax Credit.

There is $100 billion to improve immigration processing in the plan, which would make Dreamers eligible to receive Pell grants for college education. But the 137-page framework also includes programs as diverse as $10 billion for wildfire reduction work and $200 million to encourage small businesses to “fully engage in the innovation economy.”

But in cutting the price tag almost in half, negotiators had to shorten the 10-year timeframe for some programs. And they left out eagerly anticipated proposals to fund community college tuition, expand Medicare to cover dental and eye care, and require that employers provide paid leave to workers.

Those cuts were criticized by NextGen America President Cristina Tzintzún Ramirez, who said in a statement that the latest version of the plan “doesn’t go far enough to address the economic and climate crises facing our generation.”

“A few moderate Democrats negotiated against the best interests of the American people, forcing the rest of their party to renege on essential promises,” her statement said. “The framework represents a breach of democratic trust.”

Despite the push by Biden and House Speaker Nancy Pelosi, progressives on Capitol Hill were cautious Thursday, threatening to derail a separate $1.2 trillion infrastructure bill that had been held up by negotiations on the Build Back Better plan.

Many were like Rep. Raúl Grijalva, D-Tucson, who saw the good and the bad in the framework.

“This bill does a lot of good things and leaves a lot of good ideas on the table, and I’m especially disappointed to see much of the support for Native American communities that we passed in September not reflected here today,” Grijalva said in a prepared statement.

But he said he expects to support the latest version of the plan for what it does accomplish, and fix its shortcomings later.

“Our country and our political culture desperately need to take our environmental needs more seriously, and this is the start of a longer effort to build the America we know is possible,” Grijalva said in a prepared statement.

Republicans have been opposed to the plan from the beginning, and have been absent from the Democrats’ negotiations. Most focused on the price tag.

“Rather than combat inflation, House Democrats are pushing through their multi-trillion tax and spend package that will only fuel inflation further,” Rep. Debbie Lesko, R-Peoria, said in a tweet Wednesday. “Inflation is a tax on all Americans.”

Lesko charged that Biden’s “reckless energy agenda means American families have tighter budgets and have to pay more for their cars, homes, and gas.”

But Biden has insisted that the spending package will not add to the federal deficit, but will instead pay for itself through higher taxes on corporations and high-income earners. Numbers released by the White House Thursday said the plan would actually bring in just under $2 trillion in revenues for the $1.75 trillion plan.

“After months of tough and thoughtful negotiations, I know we have a historic economic framework,” Biden said Thursday. “Over the next 10 years, it will not add to the deficit at all, it will actually reduce the deficit.”

Biggs is not convinced.