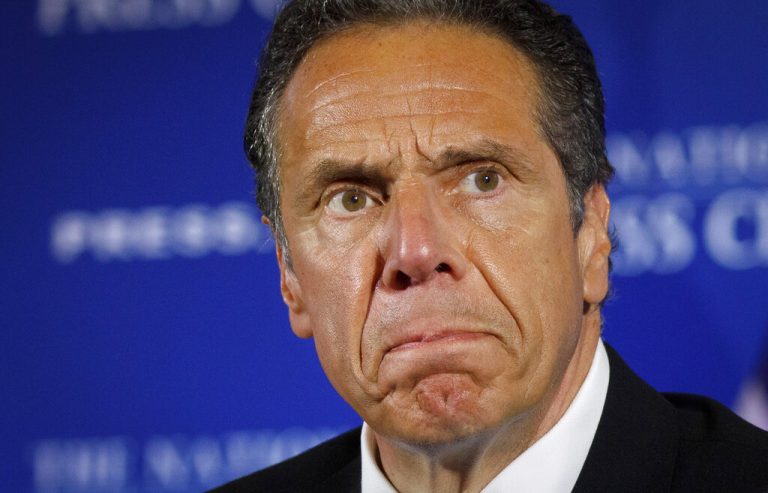 Former New York Gov. Andrew Cuomo was accused in a criminal complaint Thursday of committing a misdemeanor sex crime, two months after he resigned under pressure in a sexual harassment scandal.

But prosecutors said Thursday they didn’t know the document had been filed, and the woman’s attorney said she hadn’t been given a chance to decide whether she wanted to go through with a case.

The one-page complaint, filed by an investigator with the Albany County Sheriff’s Office, accused Cuomo of putting his hand under a woman’s shirt on Dec. 7, 2020. The document didn’t name the woman but Cuomo had been publicly accused of groping an aide, Brittany Commisso, at the executive mansion in Albany last year around that date.

The office of the county’s district attorney, David Soares, which would handle any prosecution and was involved in the investigation, issued a statement saying it had been caught off guard by the filing.

“Like the rest of the public, we were surprised to learn today that a criminal complaint was filed in Albany City Court by the Albany County Sheriff’s Office against Andrew Cuomo,” it said. “The Office of Court Administration has since made that filing public. Our office will not be commenting further on this case.”

The Times Union newspaper quoted unnamed officials as saying the complaint had been issued “prematurely” before a final decision had been made about whether Cuomo would face charges.

The office of Albany County Sheriff Craig Apple didn’t directly address that report, but confirmed in a statement that Albany City Court had issued a criminal summons ordering Cuomo to appear at 2:30 p.m. on Nov. 17.

The statement suggested it was court officials, not prosecutors or a law enforcement agency, that made the decision to issue the summons. It said sheriff’s investigators had determined there was “probable cause” to present evidence to the court “for their review to determine the most appropriate legal pathway moving forward on the investigation.”

Cuomo’s lawyer, Rita Glavin, said in a statement that the Democrat never assaulted anyone and that the sheriff’s “motives here are patently improper.”

“Sheriff Apple didn’t even tell the District Attorney what he was doing. But Apple’s behavior is no surprise given (1) his August 7 press conference where he essentially pronounced the Governor guilty before doing an investigation, and (2) his Office’s leaking of grand jury information. This is not professional law enforcement; this is politics.”

The crime of forcible touching is punishable in New York by up to year in jail and up to three years probation, with discretion for the court to impose lesser penalties including no jail time.

Commisso, an executive assistant for Cuomo, says he groped her when they were alone in an office at the governor’s mansion in Albany.

She said Cuomo pulled her in for a hug as she prepared to leave. When she told him, “you’re going to get us in trouble,” Cuomo replied, “I don’t care,” and slammed the door, according to her account. Commisso said Cuomo slid his hand up her blouse and grabbed her breast.

Cuomo has adamantly denied groping her, saying once, “I would have to lose my mind to do such a thing.”

Commisso’s lawyer, Brian Premo, said in a statement to the Times Union that she hadn’t been consulted about the criminal complaint.

“It was my client’s understanding that the district attorney’s office was in agreement with the sheriff’s department that it was going to conduct a thorough, impartial and apolitical evaluation of the case, and only after completion of the investigation, speak to my client to allow her to make an informed decision as to whether she would proceed as a victim in the case,” Premo said. “Like the district attorney’s office, she was informed about this recent filing through media.”

The Associated Press doesn’t identify alleged sexual assault victims unless they decide to tell their stories publicly, as Commisso has done in interviews.

Commisso filed a complaint with the sheriff in August in the same week a report from state Attorney General Letitia James concluded Cuomo sexually harassed 11 women. Other accusations outlined in the report range from planting unwanted kisses to asking unwelcome personal questions about sex and dating.

Cuomo announced his resignation a week after the release of the report, marking a dramatic downfall for the third-term governor who had been seen as a beacon of sturdy competence during his daily COVID-19 briefings in 2020. He attacked the attorney general’s report as inaccurate and biased.

James, whose office is not involved in the criminal investigation, issued a statement saying her civil probe had been conducted “without fear or favor.”

“The criminal charges brought today against Mr. Cuomo for forcible touching further validate the findings in our report,” she said.

James is said to be close to announcing a run for governor, multiple people with knowledge of her plans have told The Associated Press.

The complaint filed by the sheriff’s department investigator said evidence in the case included police BlackBerry messages, cell phone records, building security records, Cuomo’s flight records and a text message from his mobile phone. The complaint was signed by the officer Monday and stamped by the court as received Thursday.

Cuomo’s attorney, Glavin, has claimed records show the two were unlikely to have spent time alone during the period in question. Cuomo’s spokesman, Rich Azzopardi, ridiculed Thursday’s turn of events.

“‘Accidentally’ filing a criminal charge without notification and consent of the prosecuting body doesn’t pass the laugh test and this process reeks of Albany politics and perhaps worse. The fact that the AG — as predicted — is about to announce a run for governor is lost on no one. The truth about what happened with this cowboy sheriff will come out,” he said.

District attorneys in Oswego, Manhattan, suburban Westchester and Nassau counties also had said they asked for investigative materials from the attorney general’s inquiry to see if any of the allegations could result in criminal charges.

The Assembly Judiciary Committee is completing a wide-ranging impeachment investigation of Cuomo that began before he resigned. They also were looking at the administration’s handling of COVID-19 data and efforts to rush COVID-19 testing for Cuomo’s inner circle in spring 2020.