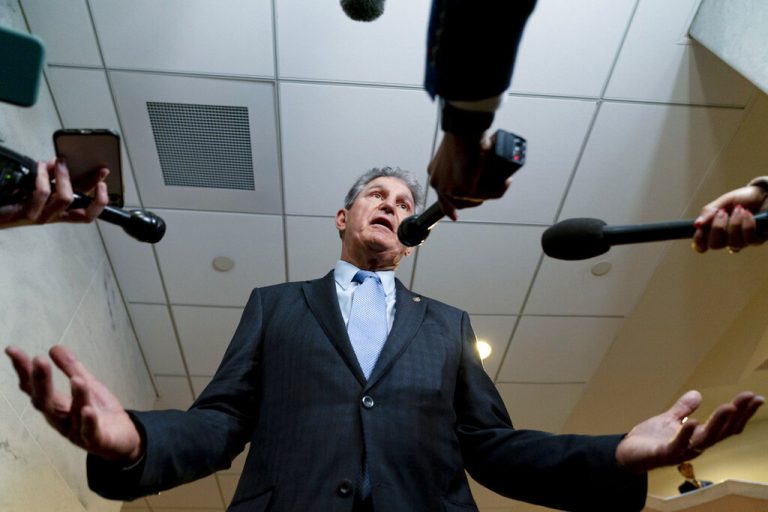 With his signature domestic initiative at stake, President Joe Biden is urging Democrats to wrap up talks and bring the social services and climate change bill “over the finish line” before he departs Thursday for global summits overseas.

Top Democratic leaders are signaling a deal is within reach even though momentum fizzled and tempers flared late Wednesday after a billionaires’ tax and a paid family leave program fell out of the Democrats’ sweeping bill, mostly to satisfy a pivotal senator in the 50-50 Senate.

But expanded health care programs, free pre-kindergarten and some $500 billion to tackle climate change remain in the mix in what’s now at least a $1.75 trillion package.

And Democrats are eyeing a new surcharge on the wealthy — 5% on incomes above $10 million and an additional 3% on those beyond $25 million — to help pay for it, according to a person who requested anonymity to discuss the private talks.

“They’re all within our reach. Let’s bring these bills over the finish line.” Biden tweeted late Wednesday.

To help push lawmakers toward that goal, Biden will speak Thursday morning to the House Democratic Caucus, a person familiar with the plan told The Associated Press on condition of anonymity. Besides pressing for important party priorities, the president was hoping to show foreign leaders the U.S. was getting things done under his administration.

It was a fast-moving day on Capitol Hill that started upbeat as House Speaker Nancy Pelosi declared that Democrats were in “pretty good shape.” But hopes quickly faded as Biden’s big proposal ran into stubborn new setbacks, chief among them how to pay for it all.

A just-proposed tax on billionaires could be scrapped after Democratic Sen. Joe Manchin of West Virginia objected, according to a senior party aide, who requested anonymity to discuss the private talks.

The billionaires’ tax proposal had been designed to win over another Democratic holdout, Sen. Kyrsten Sinema of Arizona, but Manchin panned it as unfairly targeting the wealthy, leaving Democrats at odds.

“People in the stratosphere, rather than trying to penalize, we ought to be pleased that this country is able to produce the wealth,” Manchin told reporters.

Manchin said he prefers a minimum 15% flat “patriotic tax” to ensure the wealthiest Americans don’t skip out on paying any taxes. Nevertheless, he said: “We need to move forward.”

Next to fall was a proposed paid family leave program that was already being chiseled back from 12 to four weeks to satisfy Manchin. But with his objections, it was unlikely to be included in the bill, the person said.

Sen. Kirsten Gillibrand, D-N.Y., had devised several new options for Manchin’s review and told reporters late in the evening, “It’s not over until it’s over.”

Together, Manchin’s and Sinema’s objections packed a one-two punch, throwing Biden’s overall plan into flux, halving what had been a $3.5 trillion package, and infuriating colleagues along the way.

In the evenly divided Senate, Biden needs all Democrats’ support with no votes to spare.

White House officials met at the Capitol with Manchin and Sinema, two senators who now hold enormous power, essentially deciding whether or not Biden will be able to deliver on the Democrats’ major campaign promises.

“Making progress,” Sinema said as she dashed into an elevator.

A Sunday deadline loomed for approving a smaller, bipartisan roads-and-bridges infrastructure bill or risk allowing funds for routine transportation programs to expire. But that $1 trillion bill has been held up by progressive lawmakers who are refusing to give their support without the bigger Biden deal.

Despite a series of deadlines, Democrats have been unable to close the deal among themselves, and Republicans overwhelmingly oppose the package. At best, Democrats could potentially reach a framework Thursday that could send Biden overseas with a deal in hand and unlock the process while the final details were sewn up.

Applying pressure, Pelosi announced a Thursday committee hearing to spur the Biden package along toward a full House vote, though timing remained uncertain.

Democrats had hoped the unveiling of the billionaires tax Wednesday could help resolve the revenue side of the equation after Sinema rejected the party’s earlier idea of reversing Trump-era tax breaks on corporations and the wealthy, those earning more than $400,000.

The new billionaires’ proposal would tax the gains of those with more than $1 billion in assets or incomes of more than $100 million over three consecutive years — fewer than 800 people — requiring them pay taxes on the gains of stocks and other tradeable assets, rather than waiting until holdings are sold.

The billionaires’ tax rate would align with the capital gains rate, now 23.8%. Democrats have said it could raise $200 billion in revenue that could help fund Biden’s package over 10 years.

Republicans have derided the billionaires’ tax as “harebrained,” and some have suggested it would face a legal challenge.

But Democratic Sen. Ron Wyden of Oregon, chairman of the Senate Finance Committee, insisted the billionaires tax remains on the table.

“I’ve not heard a single United States senator — not one — get up and say, ‘Gee, I think it’s just fun that billionaires pay little or nothing for years on end,'” Wyden said.

More likely in the mix was the companion proposal, a new 15% corporate minimum tax, as well as the new surtax being proposed on higher incomes above $10 million.

Together they are designed to fulfill Biden’s desire for the wealthy and big business to pay their “fair share.” They also fit his promise that no new taxes hit those earning less than $400,000 a year, or $450,000 for couples. Biden wants his package fully paid for without piling on debt.

Resolving the revenue side has been crucial, as lawmakers figure out how much money will be available to spend on the new health, child care and climate change programs in Biden’s big plan.

Among Democrats, Rep. Richard Neal of Massachusetts, the chairman of the Ways and Means Committee, said he told Wyden the billionaires’ tax may be difficult to implement. Despite Sinema’s opposition, he expects Democrats to stick with the approach his panel took in simply raising rates on corporations and the wealthy, undoing the 2017 tax cuts.

The House bill also proposes a 3% surtax on the wealthiest Americans with adjusted income beyond $5 million a year, and Neal suggested that could be raised to $10 million to win over the holdouts.

Opposition from the two senators is forcing difficult reductions, if not the outright elimination, of policy priorities — from child care assistance to dental, vision and hearing aid benefits for seniors.

The once hefty climate change strategies are less punitive on polluters, as coal-state Manchin objected, focusing instead on rewarding clean energy incentives.

Said Sen. Bernie Sanders, the Vermont Independent: “You got 48 out of 50 people supporting an agenda that works for the American people.”