Mesquite’s Weapons Too Much For The Badgers 37-7 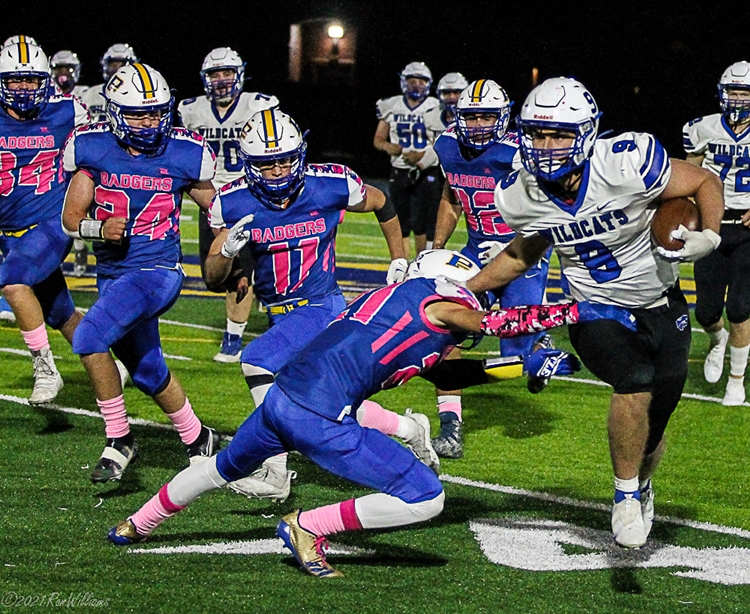 The Prescott Badgers ran into a well-balanced team in the Mesquite Wildcats last night and suffered a 37-7 loss to the defending 4A champs.

Mesquite’s Gerardo Saenz passed for over 200 yards and 3 touchdowns, and potentially could have much more if it had not been for the Badgers defensive secondary. The many targets of Saenz, including  his top two of Andrew Morris and Jaedyn Winston, along with a big running back in Blake Corner, who has breakaway speed, kept the Badgers busy all night.  Throw in an extremely strong defense, making it a long evening for the home team.

The Badgers fell behind as Saenz guided the offense on a 7 play 76 yard drive on the opening possession, capped off by a TD pass to Andrew Morris for a 7-0 lead, with 9:26 in the first quarter. Prescott followed going three and out with a negative two yards. The Badgers caught a break when Cian Mckelvey recovered a Mesquite fumble after a big hit by Landen Francis at the Badger 23. Another three and out gave the ball back to the Wildcats, who were not denied this time around.

Blake Corner scored the second touchdown of the quarter on a 45 yard blast down the far sideline with 3:35 on the first quarter clock, and it was 14-0. Carter Wojcik catch a 30 yard touchdown pass from Saenz, at 8:07 in the second, and it was 20-0. Cervando Vega picked off a Saenz pass late in the first half to keep Mesquite from scoring again. Prescott struggled mightily offensively, picking up their initial first down of the game late in the first half.

The Badger defense settled in and held the Wildcats to only a 22 yard field goal in the third quarter, making it 23-0.

Saenz threw his third touchdown pass of the night to Wojcik on a 30 yard strike on the first play of the fourth quarter, and it was 30-0.

The final Mesquite touchdown came on an impressive play by defensive lineman Daniel Clark. Clark was the recipient of a pass from Vaughan, taking the ball the other way for 42 yards, fighting his way past some Badgers to earn the pick six

Trailing 37-0, the Badgers opted to bring in some backups, and they came through. The Prescott offensive highlight came with 3:57 left when backup QB Jaxon Rice hit Ryder Thorbury on an out pattern for a 5 yard touchdown.

Prescott quarterback Alex Vaughan struggled from the constant pressure by the Mesquite defense completing just three passes in 13 attempts for 23 yards and two pics. Backup QB Jaxon Rice went 2 for 4 for 16 yards and the only Badger touchdown of the night.

The ground game fared much better after the first quarter. Cody Leopold led the Badgers with 22 carries for 68 yards, but Cervando Vega had a better average per carry with 35 yards on 5 carries. Ryder Thornbury led in receiving with 2 catches for 20 yards and a TD.

Defensively it was a struggle as well for the Badger D, but the secondary, including Cervando Vega, Caden Pena, and Jack Mason, had some moments of good coverage in limiting the damage of the long passes down the field by Saenz.

Mesquite (5-3)will enjoy a bye next Friday before hosting Benjamin Franklin on November 5. The Badgers (5-2)  will host Flagstaff (4-3) next Friday for Homecoming at 7 pm.