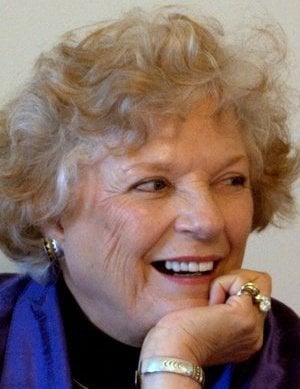 Joan Faye Meacham of Rio Verde, Arizona, has been chosen as the 2020 Sharlot Hall Award Honoree. For over 33 years, Joan has worked for the preservation of women’s history on statewide and national levels and founded the Arizona Women’s Heritage Trail.

Joan enjoyed a successful career on the East Coast before becoming involved in women’s issues. She gleaned much inspiration from suffragist Alice Stokes Paul: “I realized for the first time that there was an incredible history of women in the United States that I and so many other women outside of academia knew nothing about.”

After her husband Robert’s death in 1992, Joan broadened her efforts to promote women’s history. She organized and chaired a national committee to celebrate the 19th Amendment’s 75th anniversary, cofounded the National Women’s History Museum, and successfully lobbied to have the Portrait Monument (a sculpture of Lucretia Mott, Elizabeth Cady Stanton, and Susan B. Anthony) moved from the capitol basement crypt to the Capitol rotunda, among many other endeavors. Today, the National Women’s History Museum is a thriving entity thanks to Joan’s early vision and effort.

Joan moved to Arizona in 1995 and quickly became involved in women’s history and issues, including directing Arizona’s 75th celebration of giving women the right to vote. She soon began working to develop an Arizona Women’s Heritage Trail and served as its founding director from 2005 to 2013.

Under her leadership, the AWHT pursued projects to educate the public regarding Arizona women’s history, including women’s history walking tours in Tucson and Prescott, the traveling exhibit “How Splendid is Our Past,” a play about women’s suffrage, and more.

Joan will be honored for her work with the Arizona Women’s Heritage Trail through a virtual award presentation at the Western History Symposium, November 6.