Have We Become a Nation of Bullies? 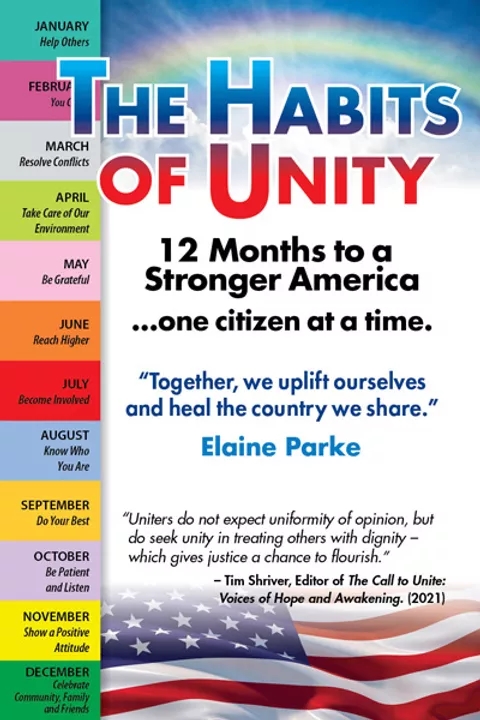 Online and offline, angry, aggressive, bullying behavior has become normalized, and it’s tearing our nation apart. Elaine Parke says it’s time we got back to behaving with kindness, respect, and dignity—and her unity movement must start with you and me.

We’ve traditionally thought of bullies as scowling kids who steal classmates’ lunch money or trip them on the playground. In recent decades, we’ve seen lots of “mean girl” types tormenting others on social media. But Elaine Parke says the face of today’s bully has changed: It is just as likely to have wrinkles, five-o’clock shadows, or bifocals.

“Adult bullies are everywhere,” notes Parke, author of The Habits of Unity: 12 Months to a Stronger America…one citizen at a time (Outskirts Press, 2021, ISBN: 978-1-9772-4276-1, $21.95, www.12habits4allofus.org). “They’re harassing healthcare workers and screaming at school board meetings. On social media, they’re arguing, name-calling, shaming, and slamming those who think differently.”

Absolutely, says Parke. Yet the problem has become worse and worse, especially in these politically divisive times. We’ve devolved into a nation of bullies—and it’s creating hurt and strife where we desperately need compromise and healing.

That’s why Parke is leading the charge against incivility, division, and unproductive conflict in America. She says it starts with holding ourselves accountable for our own bad behavior—yes, even you and me.

“No one likes to think of themselves as a bully,” she acknowledges. “But most of us have raised our voices in anger, gossiped about others, or made snarky remarks on Facebook. We all have a civic responsibility to treat others with dignity and respect, even when we don’t agree.”

Parke worries that social media has played a role in normalizing hurtful and even abusive behaviors. It’s a shame because it was meant to be a source of connection and information (and used the right way, it still is that). Unfortunately, behind a screen, we’ll say things we’d hesitate to say in person. Plus, we’re steeped in a global echo chamber that tells us we’re right, while the other side is ignorant, ill-intentioned, immoral, or worse.

“We’ve all heard the saying that we are what we eat, but I say we are the messages we consistently consume,” Parke says. “It’s time we moved to a mental diet that nourishes, encourages, and brings us together.”

Parke’s The Habits of Unity is her attempt to help people take charge of what she calls their “mental nutrition.” Much in the same way that we (hopefully) approach the food we eat, we need to develop the discipline to make more nutritious mental choices every day. Her book’s 365 “one-magic-minute-a-day” motivationals make it easy to hardwire these choices into habits.

With her simple, doable framework for uplifting ourselves, boosting our mental health, and practicing unity, Parke hopes to get everyone focused on the same branded behavior each month—just like we all focus on holidays together. The idea is that the sheer force of all that concentrated positive energy sparks a unifying kindness revolution that rises from the ground up and sweeps the nation.

Yet, until that happens, we can leverage the power of The Habits of Unity on a personal level by forming one good habit per month:

April: Take Care of Our Environment

August: Know Who You Are

September: Do Your Best

October: Be Patient and Listen

Those who’ve tried it say the plan is easy to put into practice. It feels good, so you’ll want to keep doing it. And you’ll probably find when your behavior shifts from nastiness to positivity, your interactions become less contentious and your relationships improve.

“When we each commit, all together, to eliminating our own bullying behaviors, human nature will begin to evolve into ‘humane’ nature,” says Parke. “Our country needs all of us to move beyond persecution and name-calling, and focus on listening, understanding, and cooperating with one another as much as possible.

“And as for social media,” she adds, “let’s make it a space that fosters healing instead of harassment.”

Elaine Parke, MBA, CS, CM, NSA, is the author of The Habits of Unity: 12 Months to a Stronger America…one citizen at a time. For 30 years, under the umbrella of the non-profit All of Us, Inc., her scalable and evidence-driven 12 habits of social unity model has transformed several million community citizens and youth across the USA’s Midwest and in Rwanda, helping them feel more caring and connected to one another. In 1993, her monthly branded and colorful habit-forming model was deemed a “Social Invention” by the London Institute for Social Inventions.

Parke spent 25 years fine-tuning her mass-market media skills in corporate America. Then, in 1987, she redirected her focus to helping people get along better. Her first book, Join the Golden Rule Revolution: Practice One Habit…Each Month of the Year, was published in 2000. She has won many awards and recognitions for her work.

Parke is certified in public speaking, violence prevention, conflict management, and mediation, as well as meditation, and has been a popular speaker in her field of driving health and positive social and civic engagement with managed media strategies. She has been an occasional guest marketing lecturer at the Johns Hopkins University Bloomberg School of Public Health and Carnegie Mellon University. To learn more, please visit www.12habits4allofus.org.