What’s in a name? Plenty for people honored in Hispanic Heritage Month 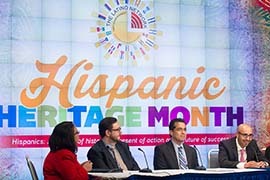 Hispanic Heritage Month is a time to celebrate the achievements of Hispanics in the U.S. And Latinos. And Chicanos. And Latines. And…

As Hispanic numbers and clout have continued to grow in the U.S. and the state, so have the terms to describe people with roots in Spanish-speaking or Latin countries. Those names have “become a source of debate, and perhaps even friction sometimes, about who should or shouldn’t be included in this definition,” said Mark Lopez, director of race and ethnicity at Pew Research Center.

For Ada Martin, one label is not enough to cover the range of backgrounds in that community.

“I cannot speak to what other members of my organization feel, but I do not view the terms as interchangeable,” said Martin, president of the Chicano/Latino Faculty and Staff Association at Arizona State University. “I do not particularly like the term Hispanic, because it is a general term that lumps many identities together under one umbrella.”

The U.S. government defined Hispanic in 1977 as a person of Spanish culture or origin. Twenty years later, it added Latino to describe someone from Latin America who may or may not speak Spanish, such as Brazilians.

These “hard and fast” government rules on who is Hispanic and who is Latino are not perfect, Lopez said. Some organizations, like Pew, have decided to use the terms interchangeably.

“When you hear people debate these two definitions, this is at the heart of the conversation,” he said. “The way the government defined these groups and how people who are from these regions choose to identify and define themselves.”

Martin, who identifies herself as Afro-Latina, said one label, or two, are not enough to cover the range of people in the community.

“It does not address the complexity of who we are as a community and as an Afro-Latina,” she said of the term Hispanic. “I do not feel that it accurately represents who I am, nor does it address other community members whose identities are not directly tied to Spain.

“I am not particularly in love with Latino either, but it more accurately depicts my cultural background,” Martin said.

In addition to Hispanic and Latino, identifiers like Latinx and Latine, both gender-neutral forms of Latino, have begun to pop up more recently. They have emerged to cover transgender and nonbinary people who may be uncomfortable using the gender-based Spanish words, Latino or Latina.

The terms are not universally accepted, with some critics saying they represent linguistic imperialism that denies their Spanish roots. A Pew Research Center survey in 2020 found that only about one Hispanic or Latino person in four had heard of the newer, gender-neutral terms, and just 3% use them.

“I know many in the Latino community do not particularly care for the term Latinx, but I appreciate that it attempts to move towards more inclusive language,” Martin said. “Latine is a new term that the community is exploring as it is more closely aligned with Spanish pronunciation.”

“I think it all comes back to asking people what they want to be identified as,” he said. “I think that’s the most important thing.”

Martin agreed that “it is always nice to ask what people prefer to be called.” In the meantime, she said it is a discussion that needs to continue.

“Conversations drive change, and it is always good to examine and re-examine the language that we use,” Martin said. “Through revisiting what we have done in the past, we can then look at ways to improve or do better in the future, but really, it needs to be an ongoing conversation.”