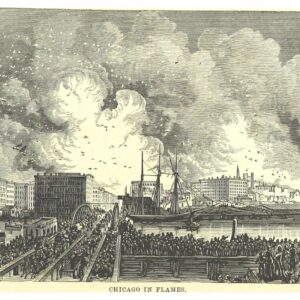 It remains in American memory as the mother of all blazes. Exactly 150 years ago, the Great Chicago Fire blew through the Windy City with a vengeance, killing some 300 people, blackening more than 2,100 acres, and destroying property valued at an estimated $4.7 billion in today’s dollars.

Yet a far deadlier, vastly bigger, and even hotter inferno raged elsewhere the very same day.

This is the story of the Peshtigo Fire.

The first days of autumn 1871 were blisteringly hot in Wisconsin, Michigan, and Illinois. Houses, stores, and barns built of wood (the area’s predominant building material) and trees in nearby woodlands were bone dry. Crews cleared forests for farms and railroads by starting small fires. Given the parched conditions that year, the woods and countryside were highly combustible. All that was necessary for a massive tragedy was a bad break from nature.

A spark was lit just as a cold front ushered in dry winds as strong as 110 miles per hour, spreading the flames far and wide and instantly turning forests into infernos. The merciless wind made the fire feed on itself, unleashing natural versions of nuclear explosions and triggering firestorms.

It was Hell on Earth. Temperatures shot up to 2,000 degrees Fahrenheit and higher. Glass melted. The fury was so intense, witnesses recalled seeing fire tornadoes. The blaze spread so rapidly there was almost no escaping it. The moment the fire appeared people had just seconds to jump into ponds, wells, or rivers. Those who couldn’t reach them were incinerated.

The strong wind skipped the flames over Wisconsin’s Peshtigo River, consuming everything on both banks. Smoke was so thick, nearby Green Island Lighthouse stayed lit all day and night to help people see.

In Robinsonville, Wis., dozens of people huddled praying inside a small Catholic chapel. Although flames surrounded it, the building was somehow spared. Survivors called it a miracle. The church later became the National Shrine of Our Lady of Good Hope.

When the fire eventually burned itself out, authorities traipsed through the charred landscape and tallied the destruction. Up to 1,875 square miles were ruined, more than twice the size of Rhode Island. It’s impossible to know just how many people perished. The best estimate is between 1,200 and 1,500, although the actual number may have reached 2,500. A cemetery in the town of Peshtigo, Wisconsin holds the mass grave of 350 victims who couldn’t be identified.

There were other deadly blazes that same day. Hundreds of people were killed and 100,000 more left homeless by the Great Chicago Fire. On the other side of Lake Michigan, the towns of Holland, Port Huron, and Manistee, Mich. all experienced deadly fires.

But the Peshtigo Fire’s horrific firestorms were the worst. They were so bad, the U.S. military studied them during World War II to develop the extremely destructive fire bombings of Dresden, Germany and Tokyo.

There was a theory, first promoted in the 1880s and resurrected more recently, that burning fragments from the Comet Biela were responsible for such a widespread outbreak of massive fires on a single day. But science dismisses that suggestion. (It’s said there’s no documented case of a meteorite ever sparking a fire on Earth.)

As long as there are forests and hot, dry weather conditions there will always be wildfires. There’s no way to completely prevent them. But we have learned much since 1871. When the weather turns threatening, outdoor burning bans are imposed. And modern technology makes it possible to contain fires more quickly these days.

Few people visit Wisconsin’s little Peshtigo Fire Museum. Those who do see a small, charred Bible that survived the nightmare. It’s open to Psalm 107, “… they drew near to the gates of Death. Then they cried out to the Lord in their trouble, and He saved them out of their distresses.”