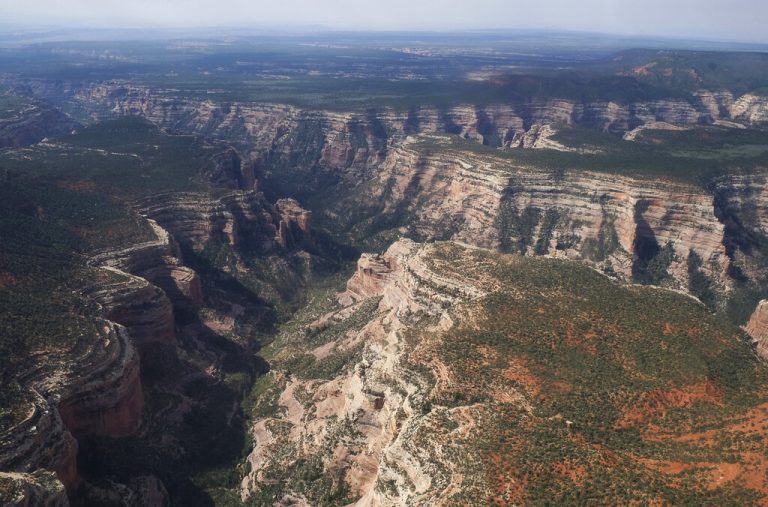 President Joe Biden will restore two sprawling national monuments in Utah that have been at the center of a long-running public lands dispute, and a separate marine conservation area in New England that recently has been used for commercial fishing. Environmental protections at all three monuments had been stripped by former President Donald Trump.

The White House announced the changes Thursday night ahead of a ceremony expected Friday.

The monuments cover vast expanses of southern Utah where red rocks reveal petroglyphs and cliff dwellings and distinctive buttes bulge from a grassy valley. Trump invoked the century-old Antiquities Act to cut 2 million acres (800,000 hectares) from the two monuments, calling restrictions on mining and other energy production a “massive land grab” that “should never have happened.”

His actions slashed Bears Ears, on lands considered sacred to Native American tribes, by 85%, to just over 200,000 acres (80,900 hectares). They cut Grand Staircase-Escalante by nearly half, leaving it at about 1 million acres (405,000 hectares). Both monuments were created by Democratic presidents.

The White House said in a statement that Biden was “fulfilling a key promise” to restore the monuments to their full size and “upholding the longstanding principle that America’s national parks, monuments and other protected areas are to be protected for all time and for all people.”

His actions were among a series of steps the administration has taken to protect public lands and waters, the White House said, including moves to halt oil leasing in Alaska’s Arctic National Wildlife Refuge and prevent road-building in the Tongass National Forest in Alaska, the nation’s largest federal forest.

Biden’s plan also restores protections in the Northeast Canyons and Seamounts National Monument in the Atlantic Ocean, southeast of Cape Cod. Trump had made a rule change to allow commercial fishing at the marine monument, an action that was heralded by fishing groups but derided by environmentalists who pushed Biden and Interior Secretary Deb Haaland to restore protections against fishing.

Protecting the marine monument safeguards “this invaluable area for the fragile species that call it home” and demonstrates the administration’s commitment to science, said Jen Felt, ocean campaign director for the Conservation Law Foundation.

Arizona Rep. Raul Grijalva, a Democrat and chairman of the House Natural Resources Committee, also praised the Biden administration in a statement, saying restoring the monuments shows its dedication to “conserving our public lands and respecting the voices of Indigenous Peoples.”

But Utah’s governor called Biden’s decision a “tragic missed opportunity.” The president’s action “fails to provide certainty as well as the funding for law enforcement, research and other protections which the monuments need and which only Congressional action can offer,” Cox said in a statement released with other state leaders.

Utah Sen. Mitt Romney also criticized Biden, saying in a tweet the president had “squandered the opportunity to build consensus” and find a permanent solution for the monuments.

“Yet again, Utah’s national monuments are being used as a political football between administrations,” Romney said Thursday. “The decision to re-expand the boundaries of Bears Ears and Grand Staircase-Escalante is a devastating blow to our state, local and tribal leaders and our delegation … today’s ‘winner take all’ mentality moved us further away from that goal.”

Jennifer Rokala, executive director of the Center for Western Priorities, a conservation group, also applauded Biden’s decision and said she hopes it marks an initial step toward his goal of conserving at least 30% of U.S. lands and ocean by 2030.

“Thank you, President Biden,” Rokala said in a statement. “You have listened to Indigenous tribes and the American people and ensured these landscapes will be protected for generations to come.”

Trump’s cuts ironically increased the national attention to Bears Ears, Rokala said. She called on the federal government to boost funding to manage the landscape and handle growing crowds.

Haaland, the first Indigenous Cabinet secretary, traveled to Utah in April to visit the monuments, becoming the latest federal official to step into what has been a years long public lands battle. She submitted her recommendations on the monuments in June.

In a statement Thursday, Haaland said she had the “distinct honor to speak with many people who care deeply about this land” during her Utah trip.

“The historical connection between Indigenous peoples and Bears Ears is undeniable; our Native American ancestors sustained themselves on the landscape since time immemorial, and evidence of their rich lives is everywhere one looks,” said Haaland, a member of the Laguna Pueblo in New Mexico.

The Bears Ears Inter-Tribal Coalition, which pushed for its restoration, has said the monument’s twin buttes are considered a place of worship for many tribes. The group incudes the Hopi Tribe, Navajo Nation, Ute Mountain Ute Tribe, Pueblo of Zuni and Ute Indian Tribe.

“President Biden did the right thing restoring the Bears Ears National Monument,” Shaun Chapoose, coalition member and chairman of the Ute Indian Tribe Business Committee, said in a statement. “For us, the Monument never went away. We will always return to these lands to manage and care for our sacred sites, waters and medicines.”

The Trump administration’s reductions to Bears Ears and Grand Staircase-Escalante paved the way for potential coal mining and oil and gas drilling on lands that were previously off-limits. However, activity was limited because of market forces.

Conservative state leaders considered the size of both monuments U.S. government overreach and applauded the reductions.

The Biden administration has said the decision to review the monuments was part of an expansive plan to tackle climate change and reverse the Trump administration’s “harmful” policies.

Fishing groups opposed both Obama’s creation of the ocean monument and the process he used to create it.

“These fishing areas have a way to be managed that is a little bit cumbersome, a little bit time-consuming, but it brings all the stakeholders together,” said Patrice McCarron, executive director of the Maine Lobstermen’s Association.