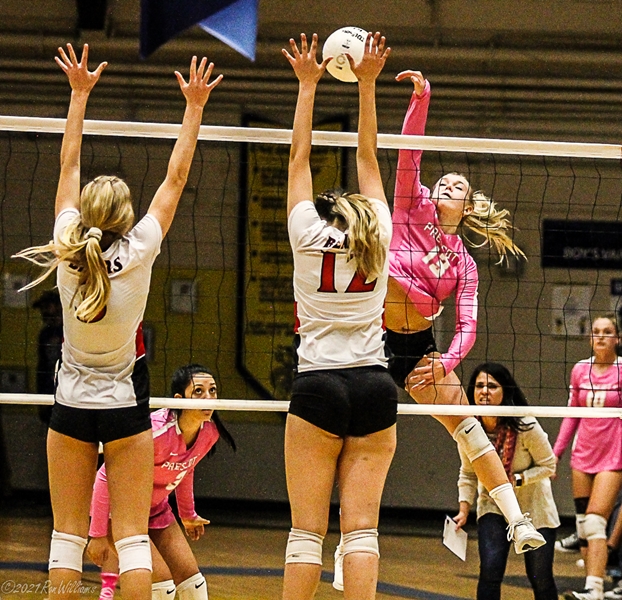 The Bradshaw Mountain Bears beat the Prescott Badgers 3-1, for the season sweep, in an unusual evening in the Badger Dome, at Prescott High School.

The Bears took the first two games, but the Badgers were responding in the third, as each student section was doing their best to raise their teams’ spirits. What was so unusual came when Bears coach called a timeout with Prescott leading 9-5 in the third game. Someone in the Badger student section tossed a souvenir volleyball towards the Bradshaw huddle during the timeout striking the coach. That prompted Prescott staff to engage with the student section, who failed to provide the person responsible. So the game was held up to have the entire student section ejected, as the Bears section chanted “You’re in trouble”. Once the students were out of the Badger Dome play resumed.

Bradshaw Mountain’s Abby Platt, who had 11 kills, said, “It was really fun and really exciting, and I think we played really well. We broke down a little bit in the third set, but we brought it back up, and are energy and how our team works together really made the difference.”

Lexi Wasil said, “I think that we honestly played good tonight, and we gave Bradshaw a fight. I think it sucks that our fans left tonight. It would have been better if they would have been to cheer us on, but we fought hard, pulled through, and won that set.”

Badger coach Liz Whitwell said, “I think we actually fought harder than the first time we played them, so I am really proud of them.  What I am not so happy about was with what happened to our fans. That is another thing to revisit. Our fans should be here to celebrate us, push us, cheer for us, and not worry so much about what else is going on. The purpose is for them to be here for us and that I’m just sure that happens for us so much tonight.”

Prescott falls to (3-5) in the GCR and (6-7) overall. The Badgers will be back on the court tonight as they travel to Mohave to take on the Thunderbirds. Bradshaw Mountain remains in first place in the Grand Canyon Region at (7-0) and (7-3) overall. The Bears will play at Coconino next Thursday, October 14, at 6 pm.

The Badgers made it 11 straight and remain undefeated with a 9-0 home win over the Barry Goldwater Bulldogs.

Prescott will travel tomorrow to face Paradise Valley at 4 pm.

The annual Ray Wherley Invitational in Prescott was held, with some Badgers having an impressive performance in competition with other high schools in the state.

Facing some tough competition from Division 1 and 2 schools, the Prescott High School boys cross country team finished an impressive 5th in the team competition, at their only home meet of the season.  Senior Lisandro McCarter was the top runner for the Badgers, placing 23rd overall. Junior Colter Donovan also had an impressive showing in 34th place, with freshman David Richards close on his heels in 35th. Junior Isaac Thompson, freshman Blake Duggan, sophomore Eric Crysler, and junior Colton Morgan all ran well to round out the boys varsity team.

Next up for the Badgers cross country team is the Titan Invitational on Friday, October 8th at Crossroads Park in Gilbert.