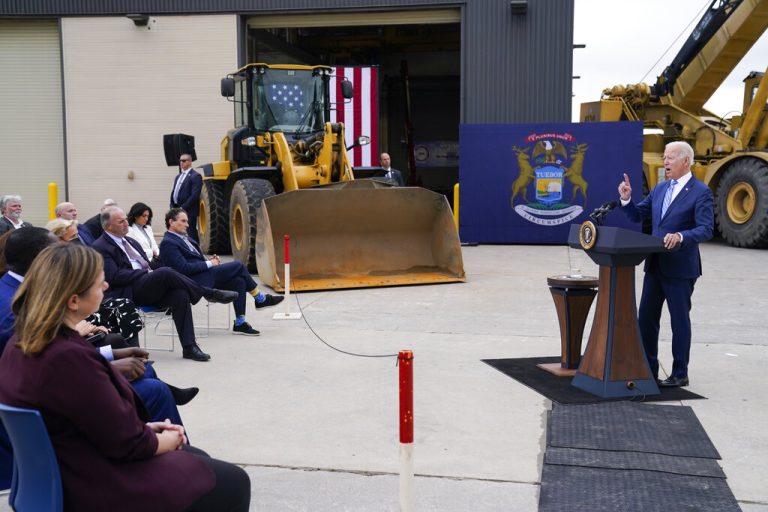 President Joe Biden and congressional Democrats edged closer to agreement Tuesday on how sharply to cut back his ambitious social spending plan, even as the president made a public case that the package will help keep the nation from losing its “edge” in global competitiveness.

Biden went to Michigan to promote the proposal for expanded safety net, health and environmental programs, but after his speech he acknowledged the inevitable as Democrats focus on a now-$2 trillion top-line for the package to win support.

“I want to make sure that we have a package that everyone can agree on,” Biden told reporters. “It’s not going to be $3.5 trillion. It’s going to be less than that.”

On Capitol Hill, strong signs emerged that Democrats were coalescing around Biden’s push for a package in the $2 trillion range, a figure that seemed potentially acceptable to Sen. Joe Manchin, D-W.Va., and other centrists with reservations. With all Republicans opposed, Biden can’t spare the support of a single Democratic senator.

At the same time, new battle lines are being formed as Democrats decide which of the many programs they want to expand — health, education, childcare, climate change — will remain in the final proposal or be reduced or left behind.

And in a signal of how much still may change before the bill makes it to his desk, Biden later suggested he’d sign a bill that includes the so-called Hyde Amendment, which blocks federal funds from being used for abortions in most cases. Manchin wants it in the final bill, while progressive Democrats oppose it.

In his speech at a union training facility, Biden called opponents of his plan “complicit in America’s decline,” as he argued his spending plan is critical to America’s global competitiveness. He said he wanted to “set some things straight” about his agenda and cut through what he dismissed as “noise” in Washington.

“America’s still the largest economy in the world, we still have the most productive workers and the most innovative minds in the world, but we’re at risk of losing our edge as a nation,” he said.

The president went on to spell out his plans in greater detail than he has in some time, after spending the past week deep in the details of negotiations on Capitol Hill.

He highlighted popular individual parts of the plan, including funding for early childhood education and investments to combat climate change, rather than the expensive topline. And he emphasized that the trillions in spending would be drawn out over a decade and paid for by tax increases on corporations and the wealthiest Americans.

Polling suggests that elements in the social spending bill and a related $1 trillion infrastructure bill — such as expanded child care opportunities and roads-and-bridges infrastructure projects — are popular with large parts of the public. But even some of the White House’s closest allies have worried that the West Wing has not done enough to sell the spending. That brought Biden back on the road Tuesday, hitting the red-leaning district of Democratic Rep. Elissa Slotkin to sell his policies.

Back in Washington, a more immediate problem was mounting as Senate Republicans are putting up hurdles to raising the nation’s debt limit, a routine vote that’s needed to allow more borrowing and prevent a devastating credit default. Biden said Democrats are considering changing the chamber’s filibuster rules, which would lower the typical 60-vote threshold to 50, to do it.

Meanwhile, negotiations continued on the pair of bills to boost spending on safety net, health and environmental programs and infrastructure projects. The $3.5 trillion price tag on the social services portion of Biden’s agenda has long been the sticking point, with progressives demanding the funding for their priorities and moderates balking at the eye-popping number.

But there was growing consensus — which Biden has expressed privately to lawmakers, and acknowledged publicly Tuesday — that the topline number will eventually shrink.

In multiple private meetings, Biden has now floated $2 trillion as a figure for his signature package, including in a call late Monday with progressive House lawmakers, who still advocated for a higher amount, according to a person granted anonymity to discuss the private meeting.

Next to Biden, the Democrats with the most on the line over the shape and success of his spending plans are House members from swing districts whose reelections are essential if his party is to retain control of Congress.

Many of those targeted moderates — including Arizona Rep. Tom O’Halleran, Virginia Rep. Abigail Spanberger and nine other vulnerable Democrats — joined Biden for a virtual meeting Tuesday. He held a similar session the previous day with a dozen progressives.

And his Tuesday visit to Slotkin’s district, which President Donald Trump narrowly won in 2020, was aimed at giving moderates like her cover to support his spending package.

While Slotkin backs the smaller, bipartisan $1 trillion infrastructure bill that has passed the Senate, she prefers passing it in the House before negotiating the broader package of social programs.

“To be honest, it was hard for me to understand why leadership decided in the first place to tie the two bills together,” Slotkin recently told The Detroit News. “That’s not how we normally operate. It’s not my preference.”

Yet even as talk of that shrinkage increased, Sen. Bernie Sanders, I-Vt., a leader of the progressives, said Tuesday, “There’s a lot of discussion going on, but I’m confident at the end of the day it’s going to be a good agreement.”

“This cannot ultimately be a bill that does 18 new things, but it could do four or five or six big bold new things,” said Sen. Chris Coons of Delaware, an ally of the president.

Lawmakers are considering cutting back some programs or limiting others to only people who qualify based on need.

Biden’s team huddled with the Democratic leaders late Monday at the Capitol as they rush to finish the latest draft — in “days, not weeks,” Senate Majority Leader Chuck Schumer said.

One senator was moved to compare it all to dancing.