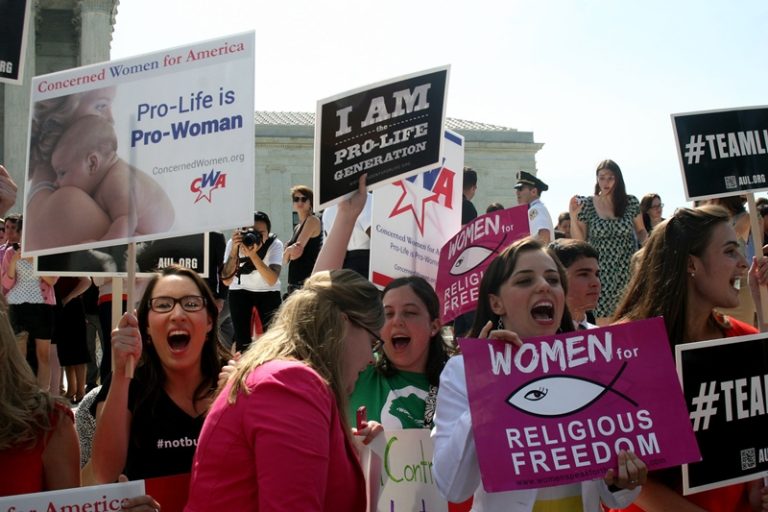 An abortion rights case that is a top issue in the U.S. Supreme Court term that began Monday has already drawn scores of legal filings – including from dozens of Arizona lawmakers, activists and advocates on both sides of the issue.

The case at issue, Dobbs v. Jackson Women’s Health Organization, concerns a Mississippi law that would prohibit abortions in almost all cases after 15 weeks of pregnancy. That would violate Supreme Court precedent from cases like Roe v. Wade, that said states cannot restrict a woman’s right to get an abortion before viability, or when the fetus could survive outside the womb.

“This case is a direct threat to Roe v. Wade and abortion rights across the country, including in Arizona,” said a statement from Sen. Mark Kelly, D-Ariz., one of the more than 200 members of Congress who filed a brief opposing the Mississippi law.

Kelly was one of six Arizona Democrats – including fellow Sen. Kyrsten Sinema and four of the state’s U.S. House members – who joined a brief from members of Congress arguing against the Mississippi law.

Others from the state who joined abortion-rights briefs in the case included 22 state legislators, two abortion-funding groups, two professors and hundreds of female athletes, who included Phoenix Mercury players Brittney Greiner and Diana Taurasi and six former members of the University of Arizona swim team.

The state itself has weighed in on the other side of the case, with Attorney General Mark Brnovich joining 23 other state attorneys general in support of Mississippi. Their brief said states should be allowed to “enact measures to prevent developed unborn children from suffering the pain of being dismembered during an abortion.”

But Brnovich is not the only state official to weigh in on the anti-abortion side. Gov. Doug Ducey joined a brief with 11 other governors, while three GOP members of the state’s congressional delegation, 14 Arizona legislators, two professors and an advocacy group have all joined on filings in the case.

The number of briefs in a case of this magnitude is “not unusual at all,” said Paul Bender, a professor of law at Arizona State University’s Sandra Day O’Connor College of Law.

“I’ve seen a couple cases recently where there were hundreds of amicus briefs and abortion, of all the topics, seems to grow the most amicus briefs,” said Bender, who also served as principal deputy solicitor general of the U.S. from 1993 to 1997.

But Bender said it is unlikely that the justices will be swayed one way or another by the large number of filings in the case. “Mostly I think it is political,” he said of the reason that groups line up to file briefs in a high-profile case like this.

“If there is a case in the court in which people have a strong interest, it has become common recently for those people to file an amicus brief to make their position known,” he said.

A recent survey by OH Predictive Insights found that 62% of Arizonans identify as pro-choice, and 40% said abortion should be legal under any circumstances. Another 47% believed in abortion only under certain circumstances, while 13% said it should always be illegal. The online survey of 882 Arizona registered voters was taken from Sept. 7 to 12, and has a margin of error of plus or minus 3.3%.

Kelly said he joined the cast to stand up for reproductive rights “against uncompromising politicians who are trying to take them away, because these decisions should be between a woman and her doctor.”

Rep. Greg Stanton, D-Phoenix, echoed that in a statement in which he said he “joined this amicus brief because the Court must do the right thing and uphold 50 years of precedent that recognizes access to abortion is a Constitutional right.” He said he believes the Supreme Court “is on a dangerous path to overturn Roe, and that has serious health care implications including here in Arizona.”

But Ducey and the other governors in their brief argued that it is time for the court to “correct the mistakes” it made with rulings like Roe, which in 1973 recognized a woman’s right to have an abortion.

“Justices on this Court and circuit court judges have consistently recognized that the original understanding of the Fourteenth Amendment’s Due Process Clause does not include any right to terminate the life of an unborn child,” their brief says.

The attorneys general argued in their brief that “multiple Justices that joined Roe agree that fetal pain and development are important considerations in measuring the State’s interest.”

How much those arguments come into play when the case is heard by the court on Dec. 1 is unclear, Bender said.

“The parties are going to be very well prepared and are going to do a very careful job in cases like that, which means those amicus briefs will not add anything any party doesn’t already know,” Bender said.

PrevPreviousOpinion: BEEReaucrats
NextOpinion: The Invisible Side of America’s Teen Suicide Crisis and What Parents Need to KnowNext