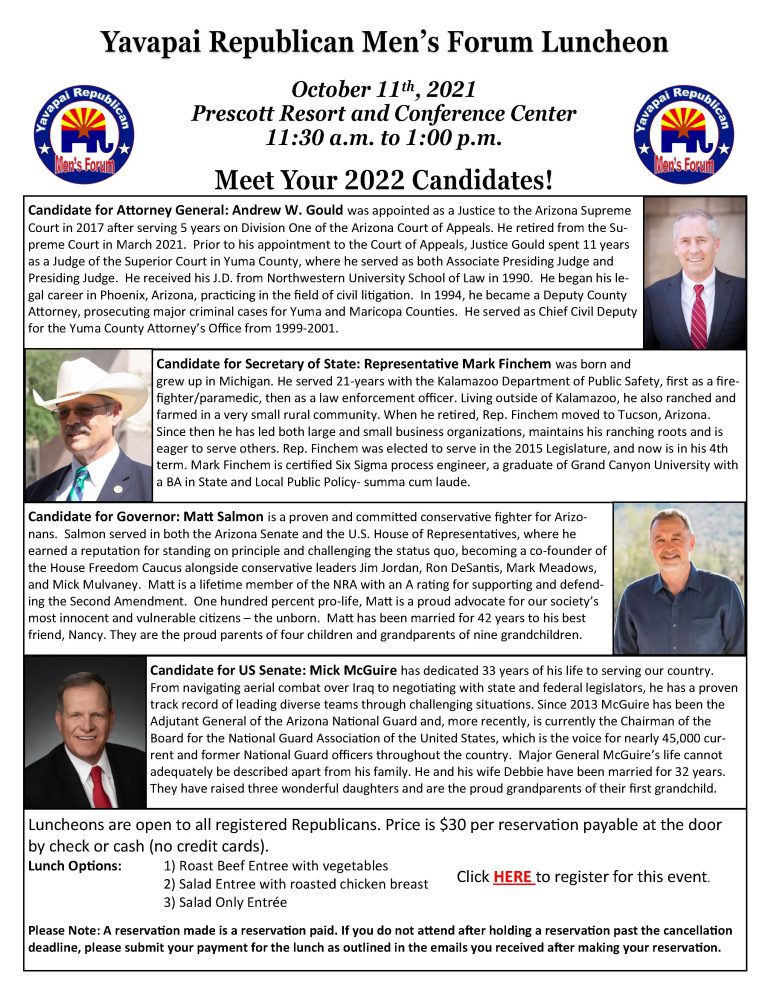 The Yavapai Republican Men’s Forum Luncheon will be October 11th, at 11 am, at the Prescott Resort and Conference Center, 1500 Highway 69, Prescott. Our guest speakers are: Matt Salmon – Candidate for Governor, Michael McGuire – Candidate for the U.S. Senate, Andrew Gould for Attorney General and Mark Finchem for Secretary of State. 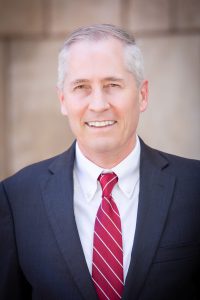 Candidate for Attorney General:  Andrew W. Gould was appointed as a Justice to the Arizona Supreme Court in 2017 after serving 5 years on Division One of the Arizona Court of Appeals. He retired from the Supreme Court in March 2021. Prior to his appointment to the Court of Appeals, Justice Gould spent 11 years as a Judge of the Superior Court in Yuma County, where he served as both Associate Presiding Judge and Presiding Judge. He received his J.D. from Northwestern University School of Law in 1990. He began his legal career in Phoenix, Arizona, practicing in the field of civil litigation. In 1994, he became a Deputy County Attorney, prosecuting major criminal cases for Yuma and Maricopa Counties. He served as Chief Civil Deputy for the Yuma County Attorney’s Office from 1999-2001. Justice Gould has previously served on the Arizona Supreme Court Commission on Technology, as the President of the Arizona Judges’ Association, and has taught at the Judicial Conference and New Judge Orientations. 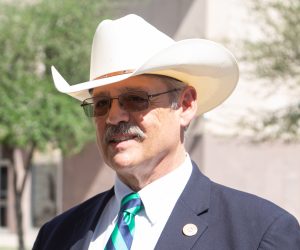 Candidate for Secretary of State: Representative Mark Finchem was born in Easter, Michigan, and grew up in West Michigan. He served 21-years with the Kalamazoo Department of Public Safety, first as a firefighter/paramedic, then as a law enforcement officer.

Living outside of Kalamazoo, he also ranched and farmed in a very small rural community. When he retired, Rep. Finchem moved to Tucson, Arizona. Since then he has led both large and small business organizations, maintains his ranching roots and is eager to serve others. 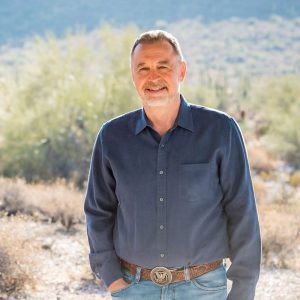 Candidate for Governor: Matt Salmon is a proven and committed conservative fighter for Arizonans. Salmon served in both the Arizona Senate and the U.S. House of Representatives, where he earned a reputation for standing on principle and challenging the status quo. Matt co-founded of the House Freedom Caucus alongside conservative leaders like Jim Jordan, Ron DeSantis, Mark Meadows, and Mick Mulvaney. During his time in Congress, Matt was named a “Defender of Liberty,” earned the “Taxpayer Hero” award from Citizens Against Government Waste, and many more.  He is a lifetime member of the NRA with an A rating for supporting and defending the Second Amendment. 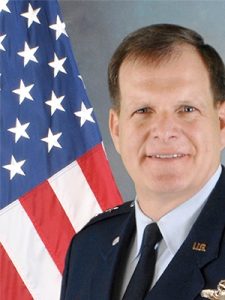 Candidate for U.S. Senate: Mick McGuire has dedicated 33 years of his life to serving our country. From navigating aerial combat over Iraq to negotiating with state and federal legislators, he has a proven track record of leading diverse teams through challenging situations. Since 2013 McGuire has been the Adjutant General of the Arizona National Guard and, more recently, is currently the Chairman of the Board for the National Guard Association of the United States, which is the voice for nearly 45,000 current and former National Guard officers throughout the country. For nearly eight years (2013–2021), Major General McGuire served as the Adjutant General (TAG) of the Arizona National Guard, reporting directly to Governor Ducey as the senior military officer in the state.

The cost for lunch is $30 per person.

Remember – a reservation made is a reservation paid.  If you do not attend after holding a reservation past the cancellation deadline, please submit your payment for the lunch as outlined in the emails you received after making your reservation.  The cutoff for accepting cancellations is before 10:00 PM the Wednesday before the Luncheon.

Luncheons are open to all registered Republican women and men.

Registration for this event closes Wednesday, October 6th at 10:00pm.

Lunch options this month are:

PrevPreviousTo-Go Cocktails Are Available In Arizona: What You Need To Know
Next‘Pandora Papers’ bring renewed calls for tax haven scrutinyNext