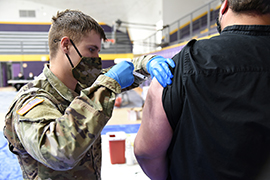 Immigrants to the U.S. now are required to be fully vaccinated against COVID-19 under a U.S. Citizenship and Immigration Services policy update that took effect Friday.

The update, which applies to those seeking permanent residency in the U.S., adds COVID-19 to a list of required vaccinations against such illnesses as polio, measles, mumps and hepatitis, according to the Centers for Disease Control and Prevention.

A waiver is available to immigrants younger than 12, immigrants who have potential harmful reactions to vaccinations, or those who can’t readily get vaccinated because of limited supply.

Ruben Reyes, an immigration attorney based in Phoenix, doubts a challenge to the update would succeed.

“I don’t see this going away,” Reyes said, noting that it most likely would be upheld in federal court. “There’s plenty of precedent, as well as plenty of public data now available from the one and half, almost two years of this pandemic that the vaccines are effective in mitigating the fatalities of the disease.”

Reyes referred to the 1918 influenza pandemic as an example of precedent, where community and governmental measures, such as isolation, quarantine and limiting of social gatherings, were implemented to limit spread and infection.

Reyes said the percentage of those who would decline to emigrate because of this vaccination requirement would likely be “very, very small” with most applicants complying to avoid additional delays.

“It’s not cheap – to immigrate to the U.S. is not quick,” Reyes said. “For most of these people, they’ve been waiting for a year, two years, three years. Some individuals have had their process put on hold because of the pandemic.”

Reyna Montoya, founder and CEO of Phoenix immigration advocacy group Aliento, said immigration processes can be hard to navigate even for her. They can be especially difficult for those whose first language isn’t English. Another layer of complication is the polarization over COVID-19 vaccines.

“That’s what’s really unfortunate because sometimes these big agencies are making decisions that are impacting different folks across the world,” she said.

“It doesn’t seem right now, at least it’s not clear from the USCIS guidelines, whether the U.S. is going to be responsible for providing that vaccine to the folks who want to do that medical examination,” Montoya said.

On Sept. 9, President Joe Biden announced a vaccine mandate requiring federal employees, government contractors and health care workers in Medicare/Medicaid participating hospitals to be vaccinated against COVID-19. Private sector businesses with 100 or more employees also must require vaccination or weekly testing, according to Biden’s “Path Out of the Pandemic” COVID-19 plan.

The administration’s efforts have been opposed by Republican governors and politicians, including Arizona Gov. Doug Ducey and Attorney General Mark Brnovich, who have both pledged to pursue legal and administrative action to block the mandates.

From October to December 2020, 41% of the immigrants who obtained lawful permanent residency in the U.S. came from Mexico, India, China, the Dominican Republic, the Philippines and Brazil, according to data from the Department of Homeland Security.

Of those six countries, Mexico, the Philippines and India have the lowest rates of fully vaccinated population – 35.72%, 22.42% and 17.38%, respectively as of Friday – according to Johns Hopkins Coronavirus Research Center data.