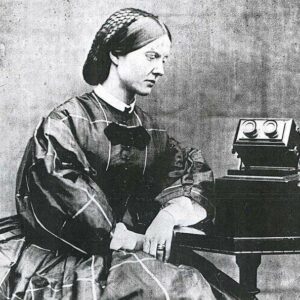 Mary Ward did a lot of remarkable things. She was highly learned at a time when women were denied a formal education. She was a bold pioneer in a field dominated almost entirely by men. And she was even one of three women admitted into a prestigious British organization (with one of the others being Queen Victoria).

Yet despite her many remarkable accomplishments, it was her sad end that earned her an unenviable footnote in history. This is the lost legacy of a forgotten first fatality.

Girls, especially those born into respectable, affluent Irish families like the one that welcomed Mary King into the world in 1827, simply did not go to school. What scant education they received was at home. It often amounted to little beyond learning how to read and write. But nothing could deter little Mary’s insatiable intellectual curiosity.

She was collecting insects by age three and later drew them in pencil, using a magnifying glass to capture their tiniest features in minute detail. That so impressed a family friend, he persuaded Mary’s father to buy her a microscope, unleashing a love affair with science that never ended.

Denied formal training in the classroom due to her gender, Mary wrote to famous men of science and asked them questions and thus educated herself. She also cultivated an avid interest in astronomy.

Afraid no publisher would print her first scientific book because she was a woman, and because she lacked a college degree, she privately printed 250 copies of it. She needn’t have worried. The book was eventually reprinted eight times between 1858 and 1880 as “A World of Wonders Revealed by the Microscope.” While the title wasn’t catchy, its intricate artwork was dazzling. In fact, a full-color facsimile edition was even published in September 2019. She wrote or co-authored five books in all, illustrating both her own works and a good many books penned by other scientists.

Mary eventually became one of only three women on the Royal Astronomical Society’s mailing list. Her career was, by mid-Victorian standards, simply incredible.

She even found time to marry Irish soldier, politician, and aristocrat Henry Ward and have eight children. (Their great-granddaughter Lalla Ward went on to appear in the BBC’s popular TV series “Dr. Who” in the late 1970s and early 80s.)

Still, it was her large and young family that makes Mary’s ultimate claim to fame even sadder.

The sons of a family friend had built an experimental steam-powered automobile. On a bright Tuesday in August 1869, the boys proudly drove Mary and Henry, their tutor, and two other people on a country drive near Birr, Ireland.

But driving was a totally brand-new skill then, and the young driver clearly hadn’t mastered it. He took a curve too fast. Mary was thrown from the vehicle. It rolled over her.

A doctor lived nearby and was quickly summoned. He rushed to the accident site but could do nothing to help. She died of a broken neck just minutes later. She was only 42 years old.

With that, Mary Ward became the first person in the world killed in an auto accident. When it happened, Henry Ford was just 6 years old.

The numbers only grew bigger from then on as cars became increasingly popular over time. By 2013, the most recent year for which global figures are available, 54 million people were hurt in accidents worldwide. Some 1.4 million of them died. Experts see no decrease in the immediate future.

A sad legacy that all started with Mary Ward on an Irish dirt road 152 summers ago.