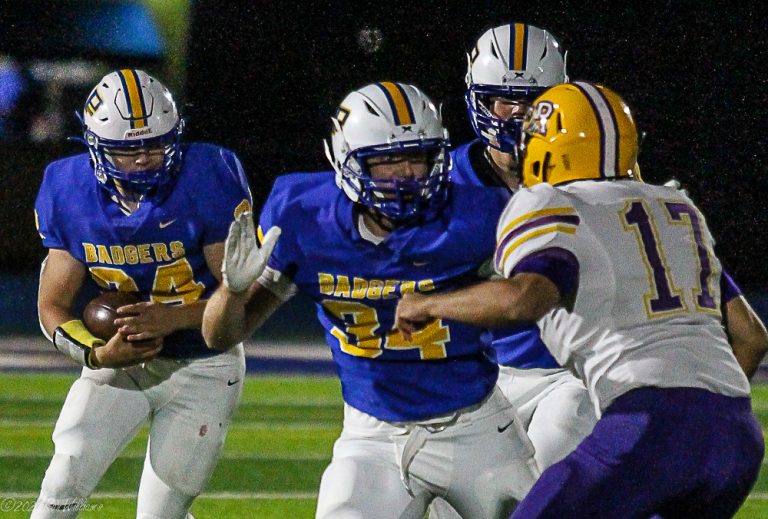 After four straight weeks of falling behind early and coming back to win, the Prescott Badgers were unable to make it five, suffering a tough 15-13 home loss to the Blue Ridge Yellow Jackets.

The Yellow Jackets (4-2) used an extremely effective run game using a double wing formation, keeping the Prescott defense off all evening. Trailing 15-0 to start the fourth, Prescott needed a break to get the goose egg off the board.

One of the few times the Badger “D” was able to stop the Blue Ridge offense came with 5:38 left in the fourth. A bad snap on a punt gave the Badgers first down at the Yellow Jackets three. The next play Cody Leopold scored to pull within 15-6 with just 5:30 remaining.

Once again the Badger defense rose to the occasion, led by Landen Francis starting the Blue Ridge drive by dropping running back Jace Barton for a six yard loss. Prescott had Blue Ridge at fourth and three, but a defender jumped on a hard count, giving the visitors another set of downs, more importantly the ability to burn more clock.

The Badgers finally held Blue Ridge and got the ball back with 4:19 left at the Blue Ridge 27.

Vaughan drilled a pass over the middle to Landon Aurich from 22 yards out with 1:32 to play. The ensuing onside kick failed and Blue Ridge ran out the clock.

Badger quarterback Alex Vaughan, who had one TD pass and also played defense said, “They run this tricky offense which makes it very hard to know who has the ball. We got behind and just ran out of time.”

Blue Ridge scored their first touchdown after moving down the field when Jace Barton went up the middle from 4 yards out.

The Yellow Jackets other score came on a 3 yard blast by Samuel Montoya. The oddest play of the night came on a botched PAT, when the holder, QB Hunter Martinez took the ball and was getting spun down, but managed to toss the ball towards the end zone, where Franko, with a K, Harris came up with a diving catch for the two points. A little bit of déjà-vu if you know what I mean.

Coach Braden Johnson said, “We have been trying to talk all year about starting fast, because we can’t keep falling behind early. Tonight we just did not have enough time to comeback. They did an excellent job of controlling the game. They had the ball most of the third and even the fourth quarter. Our offense just struggled till late.”

Cody Leopold led the Badgers with 63 yards rushing and a touchdown. Alex Vaughan was 7-13 for 47 yards and a touchdown. Samuel Montoya, Jace Barton, and Seth Slaughter combined for over 230 yards and the two TDs for Blue Ridge. The Yellow Jacket defense, led by Hershall Gregg, held the Badgers to just 164 yards of total offense.

The Badgers (4-1) will take next Friday off before a trip to Flagstaff on October 15 to take on the Coconino Panthers.

The Badgers improved to (10-0) with a 9-0 sweep over the Deer Valley Skyhawks. Prescott will host Barry Goldwater on Tuesday at 4 pm.

The Badgers dropped a very tough match over in Kingman to Lee Williams.

Prescott was able to pick up an exciting first game win, but the team fell short in the next three to follow.

The Badgers were led by Lexi Wasil, with a double-double of 10 kills, 10 digs. Millie Diener and Kari Kasun had six kills apiece.

Miranda Adams and Payton Johnson had 5 kills each, and Ella Edwards had 29 assists and 4 aces.

Lee Williams improved to (4-2) in the GCR, and (6-5) overall. The Badgers (3-4) in the Grand Canyon Region and (6-6) overall, will host region leader and rival Bradshaw Mountain, on Tuesday, October 5th at 6pm.