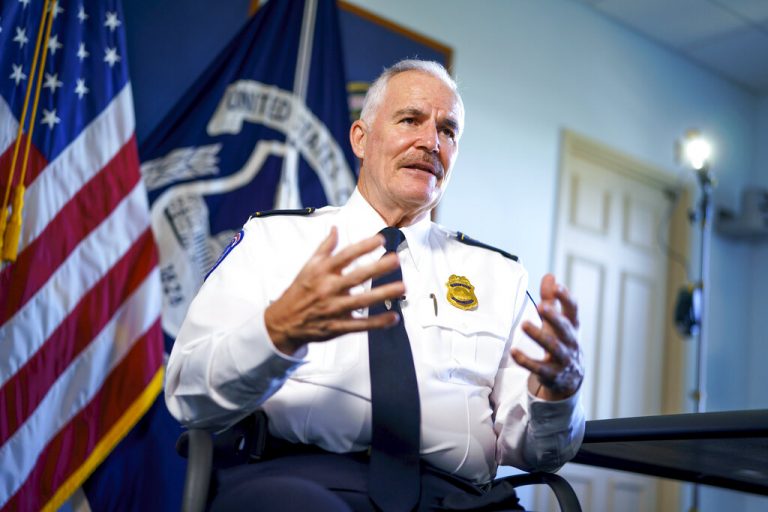 The newly installed chief of the U.S. Capitol Police says the force, still struggling six months after an insurrection that left its officers battled, bloodied and bruised, “cannot afford to be complacent.” The risk to lawmakers is higher than ever. And the threat from lone-wolf attackers is only growing.

In an interview with The Associated Press, J. Thomas Manger said his force is seeing a historically high number of threats against lawmakers, thousands more than just a few years ago. He predicts authorities will respond to close to 9,000 threats against members of Congress in 2021 — more than 4,100 had been reported from January to March.

Manger touted changes that have been made in intelligence gathering after the department was widely criticized for being woefully underprepared to fend off a mob of insurrectionists in January. Officials had compiled intelligence showing white supremacists and other extremists were likely to assemble in Washington on Jan. 6 and that violent disruptions were possible. Police officers were brutally beaten in the insurrection.

The events of that day have redefined how the U.S. Capitol Police and other law enforcement agencies in Washington approach security. Extreme measures put into place two weeks ago for a rally in support of those jailed in the riot aren’t a one-off, they might be the new normal. Propelled by former President Donald Trump, the awakening of domestic extremist groups and the continued volatility around the 2020 election have changed the calculus.

Manger said putting up temporary fencing around the Capitol and calling in reinforcements was a prudent decision. It may not be the same for every demonstration.

With Manger, the police force got a longtime lawman. He served as chief in Maryland’s Montgomery County, outside Washington, from 2004 to 2019. Before that, he led the Fairfax County, Virginia, police department. Those jobs, as well as a leadership position in the Major Cities Chiefs Association, have made him a familiar face in Washington law enforcement circles and on Capitol Hill.

He took over in late July, months after the former chief resigned amid the fallout from the insurrection. The Sept. 18 rally was Manger’s first test — and he was taking no chances.

In the end, police far outnumbered the protesters and the Capitol officers were mocked by some for going overboard. But Michael Chertoff, a Homeland Security secretary during the George W. Bush administration, said it’s just smart policing to learn from mistakes and be better prepared the next time, and so what if there’s too many police milling around — if the result is no one is killed or hurt.

“When you get demonstrations that are advertised or pitch to right wing or left wing extremists, I think you’re going to see that they’re going to lean into a visible show of protection, maybe more than they need but enough to make it clear they won’t be overwhelmed again,” he said.

Chertoff, who now runs the Chertoff Group security and cybersecurity risk management, said such fortifications won’t be necessary for every free speech event planned in the nation’s capital, but law enforcement must be better prepared when it comes to people who have expressed sympathy for Jan. 6, because there is strong reason to believe they’re sympathetic to the idea of using violent force to disrupt government. Because it already happened.

The Capitol Police are part security agency, part local police — it has an annual budget of approximately $460 million and about 2,300 officers and civilian employees to police the Capitol grounds and the people inside the building, including all the lawmakers and staff. By contrast, the entire city of Minneapolis has about 800 sworn officers and a budget of roughly $193 million.

On Jan. 6 at least nine people who were there died during and after the rioting, including a woman who was shot and killed by police as she tried to break into the House chamber and three other Trump supporters who suffered medical emergencies. Two police officers died by suicide in the days that immediately followed, and a third officer, Capitol Police Officer Brian Sicknick, collapsed and died after engaging with the protesters. A medical examiner later determined he died of natural causes.

The Metropolitan Police announced this summer that two more of their officers who had responded to the insurrection, Officers Kyle DeFreytag and Gunther Hashida, had also died by suicide.

A scathing internal report earlier this year found that serious gaps in tactical gear including weapons, training and intelligence capabilities contributed to security problems during the Jan. 6 melee. In his report, obtained by the AP, Capitol Police Inspector General Michael A. Bolton cast serious doubt on the force’s ability to respond to future threats and another large-scale attack.

But then a second task force later charged with reviewing Jan. 6 said the Capitol Police already has the ability to “track, assess, plan against or respond” to threats from domestic extremists who continue to potentially target the building.

The report recommended a major security overhaul, including the funding of hundreds of new officer positions and establishing a permanent “quick response force” for emergencies.

But those changes would require massive influx of money. In a $2.1 billion measure in July, Congress delegated nearly $71 million, with much of that funding going to cover overtime costs.

Still, Manger said, “I think that what we have in place today is an improvement over what we had a year ago or nine months ago.”

The event, which Republican lawmakers and Trump and his allies have sought to downplay and dismiss, has prompted a surge in applications to join the force. Manger likened it to police and firefighter applications after the Sept. 11 terrorist attacks.

Manger also defended keeping on Yogananda Pittman, the Capitol Police official who led intelligence operations for the agency ahead of January’s attack. Pittman, who was elevated to acting chief with a tenure marred by a vote of no-confidence from rank-and-file officers on the force and questions about intelligence and leadership failures, is back in charge of intelligence and protecting congressional leaders.

Manger pointed to Pittman’s decision as acting chief to implement recommendations from the inspector general and to expand the department’s internal intelligence capabilities so officers wouldn’t need to rely so heavily on intelligence gathered by other law enticement agencies. A number of top officials had left their posts after January’s attack.

But Manger shot back at critics who have said Pittman should have been let go after her stint as acting chief because she was the top official in charge of intelligence before the insurrection.

“This notion that I should come in and just fire everybody on the leadership team because they failed on January 6th … first of all, this department was in enough chaos without me firing everybody,” Manger said, “and then where would I have been without any experience on my leadership team to rely on and to assist me going forward?”