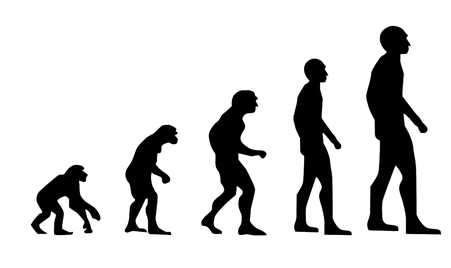 What to do about it.

Ever since the first single-celled creature appeared — maybe four billion years ago — evolution has followed a pretty simple rule: survival of the fittest. If a genetic mutation led to a new trait that made something more likely to survive and reproduce, the trait became more common. Evolution had to grind away for almost all of those 4 billion years before homo sapiens came along — only about 300,000 years ago.

And we kept evolving. Traits like good health, strength, and intelligence make people more likely to survive and have children, and children inherit those traits. As soon as there was agriculture and complex societies, powerful men had a lot of children. Chinese emperors had thousands of concubines, whose job was to have as many children as possible. They were cycled through to the emperor at the most fertile point in their menstrual cycles. Chinese emperors, along with Genghis Kahn, probably fathered more children than anyone else in history.

The guy for whom we have the best records, though, is Moulay Ismail, who was sultan of Morocco for 50 years, from 1672 to 1727. He had four wives and at least 500 concubines, including many Europeans. He had between 888 and 1,042 children, depending on which source you read. The top guys probably had good qualities, so when they had a lot of children, the population was improved.

In Western countries, up until the 19th century, rich, powerful men had a lot of children, and poor, powerless men and women often had none. Bastardy was deeply shameful, and if people did not have enough money to start a household, they didn’t marry.

This kind of childbearing was eugenic, that is, good traits were passed on more often than bad.

In Europe, this began to change in the 1870s, with the invention of rubber condoms, the first reliable contraceptive. Rich people could still afford to have a lot of children, but once they had the choice to have fewer, they cut back. At the same time, society got richer — and, crucially, Western countries set up welfare programs so that poor people could have children and not starve. Having children outside of marriage became common.

Contraception means thinking ahead. Dim, impulsive people don’t think ahead, and now can have children at a clip that was unthinkable 100 years ago. “Tennessee’s deadbeat dads: The three men who have fathered 78 children with 46 different women . . . and they’re not paying child support to any of them.” I’m afraid it takes a British paper, the Daily Mail, to run a story like this,­ not the New York Times. Three men, 78 children, 46 different women, no child support. This kind of reckless procreation is possible only because taxpayers — you and I — pay for it.

This story appears to have an all-black cast. Here are the three fathers. The one in the upper left seems to be at least temporarily out of circulation. And here is a small sampling of the 46 mothers, pining for their men. You won’t get a Ford Foundation grant to find out, but I suspect black men hold all the records, coast to coast. Does anyone think those 78 children are going to be a credit to their race? Welfare means that responsible taxpayers who limit their own child-bearing are forced to subsidize the proliferation of people with bad traits and bad habits.

And it’s definitely happening. This recent paper from Britain is called “Human Capital Mediates Natural Selection in Contemporary Humans.” That’s a fancy way of saying evolution is affected by the traits of people who have children.

This paper used what are called polygenic scores. If you don’t know what they are, you should learn about them, because they are a vital tool for analyzing the influence of genes — everything from how smart you are to whether you will get diabetes or even a divorce. This graph shows how a polygenic risk score (PRS) predicts the chances of getting a disease as you get older.

The paper used a sample of more than 400,000 white people in Britain, and compared the number of children they had to the traits they had — good and bad — as shown by their polygenic scores. Here are the 33 traits the researchers looked at, listed on the left. The traits with the dots furthest to the right are the traits found in parents, in the aggregate, that are the most above the norm for the whole population, and the ones furthest to the left that are most below the norm. Traits are passed on to children, so the next generation will have more of the traits to the right of the dotted line, and fewer of those to the left. You can stop the video and look at this carefully. At the top, the traits most rapidly spreading in the next generation are ADHD, smoking, extraversion, high BMI, and large waist circumference. These last two are measures of fatness. Heart disease, depression, Alzheimer’s, and schizophrenia are also on the right. To the left are the traits that are being bred out, and at the bottom, being bred out most rapidly, are three measures of intelligence. Evolution has gone into reverse. If this keeps up, Westerners will degenerate to the point that society collapses, there is no more welfare, and evolution will resume its normal direction. Ordinary folks know that the children of most people on welfare are going to be a drag on society. If they had a chance, I bet a lot would vote to give all welfare recipients implantable contraceptives.

This book, Eugenics: A Reassessment, by Richard Lynn, is the best discussion of the subject. He writes that in the West, reckless procreation is more common among blacks than whites, especially in the underclass, and that smart, well-educated black women have very few children. Prof. Lynn estimates that the genetic basis for the average white American IQ is declining about one point per generation, with the black American IQ dropping at twice that rate: two points per generation.

We’re not supposed to talk about this stuff, but Americans and Europeans in the 1920s understood very well that evolution had gone into reverse, and they took firm eugenic measures. However, eugenics became wrongly and stupidly associated with the Nazis, so it’s now taboo. But I’ll say it again: Each generation is now worse off than the one before. Infertile women who need donor eggs also understand how much genes matter. Here is a site called Donor Concierge that talks about what you might have in mind: “your ideal may be a blonde egg donor, or a beautiful egg donor, or even an athletic egg donor.” Why not all three? Because you might not be able to afford it. This site warns that depending on how finicky you are, eggs can run from “just over $10,00 and some well over $40,000.”

There are other ways to improve your stock. If a couple does in vitro fertilization, it can do what’s called embryo selection: Harvest a bunch of eggs, fertilize them all, and then pick the embryo with the best health odds.

This girl, Aurea Smigrodski, is the first baby born after an embryo was screened for polygenic risk scores. Her father says they chose the embryo with the least likelihood for disease because parents have a duty to give a child the healthiest possible start in life. He said you can select for high IQ, too, but when you start talking about enhancing intelligence, suddenly knives come out. In the West, we get worried articles like this one in the Financial Times. “When does genomics become eugenics?” Answer: When it stops screening out disease and starts screening in brains and beauty — that’s what Hitler would have done, you see. We will degenerate, faster and faster, until “eugenics” is no longer taboo. The Chinese are moving forward, full speed ahead. Place your bets, ladies and gentlemen: Which country will come out on top? PrevPreviousPelosi vows to pass $1T bill, move ahead on larger measure
Next4 Inventions That Changed the Manufacturing IndustryNext