Maricopa election probe is complete, but fight may just be starting 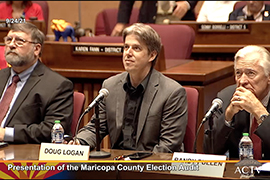 After months of work and millions of dollars, the contractors investigating Maricopa County’s 2020 elections were able to answer one question Friday – President Joe Biden did win the election there last November.

But otherwise, the auditors spent several hours and more than 100 pages in their report to the Arizona Senate laying out questions they said they could not answer and calling for more investigation.

Critics seized on the report to say it proved what they have been saying all along, that the auditors were unqualified and the investigation itself was a sham, aimed at creating excuses for Republicans to enact unnecessary voting restrictions.

The audit “dragged our state and country through months of partisan political theater, culminating in a report that reinforces what election experts have been saying all along – that this exercise was a scam,” Arizona Secretary of State Katie Hobbs said in a statement Friday.

But Arizona Senate President Karen Fann praised the work of contractors, led by the firm Cyber Ninjas. She called it the most complete election audit ever conducted and said the Senate is already working on legislation to address issues raised by the report.

Fann also sent a copy of the report to Arizona Attorney General Mark Brnovich, saying there were “several items in the reports that merit the attention of your office,” without specifying what those issues are. Brnovich’s office did not immediately respond to a request for comment Friday.

Fann insisted, as she has from the outset this spring, that the review of the presidential and U.S. Senate races in Maricopa County was aimed at “election integrity,” and not an attempt to perpetuate what Democrats call “the big lie” – claims that election fraud cost Donald Trump re-election.

But the crowd at a Republican “watch party” outside the Capitol did not appear convinced. With signs that “Arizona Outcry! Must Decertify” and “Criminals stole our elections,” they settled into a few hundred chairs that were set up to watch the presentation on a jumbo screen.

A few stands selling pro-Trump or anti-COVID vaccine shirts, hats and flags were set up, and advocacy groups and GOP political hopefuls distributed pamphlets through the crowd. Occasional cheers could be heard during the livestream, but the initial excitement died down as the audit presentation dragged into its third hour until just several dozen chairs remained.

The crowd perked up at the end, however, when Fann said, “We the people, you the voters, we want answers, we want our votes to count. There’s nothing more important than our election integrity.”

Cyber Ninjas CEO Doug Logan spent much of his testimony outlining the process by which 1,500 people spent more than 100,000 hours hand-counting 2.1 million Maricopa County ballots over the past five months.

That count ultimately showed that not only did President Joe Biden and Arizona Sen. Mark Kelly win in November, as county and state returns showed, but the two Democrats actually won by wider margins than the official tally showed.

Democratic lawmakers said the final report proves that the election results were accurate, and Trump lost Arizona. The “fraudit” has been a waste of time, money and resources, they said.

“There is nothing we can do to get them to understand that their candidate lost,” Maricopa County Supervisor Steve Gallardo, a Democrat, said in a news conference Friday. “At the end of the day, one thing is going to be loud and clear: Our elections are safe and accurate.”

The report was not ready to go that far. While it could not identify specific problems, it pointed to a number of potential issues – issues it said it could not address because it did not get the level of cooperation it wanted from Maricopa County officials.

Those concerns ranged from what investigators said were missing or incorrect serial numbers on ballots, a lack of chain of custody in signature verification and software concerns. Further research is needed to address those concerns, the report said.

The contractors took no questions during their presentation to a largely empty Senate chamber, where Fann and Sen. Warren Petersen, R-Gilbert, the chairman of the Senate Judiciary Committee, offering largely complimentary comments.

But Liz Howard, senior counsel at the Brennan Center who also served as an observer during the audit, said the concerns raised by contractors fit a pattern of making repeated false claims. These contractors have “made multiple other false claims about, you know, electronic files.”

“This is the same cast of characters, we’re seeing them use the same playbook over and over,” Howard said. “At this point, it’s not unreasonable to assume that this approach is intentional.”

Alex Tausanovitch, director of campaign finance and electoral reform at the Center for American Progress, said the auditors’ call for continued review is little more than a “biased witch hunt to try and pursue conspiracy theories.”

“This is only a symptom of a larger disease,” Tausanovitch said. “There is a movement among Trump-aligned Republicans to discredit legitimate election results.”

That was addressed directly by two prominent Republicans caught up in the election probe. Maricopa County Supervisor Bill Gates and county Recorder Stephen Richer are featured in a new TV ad in which they say the “partisan audit … driven by conspiracy theories” is designed to “desecrate our democracy.”

“I wish there were more Republicans who would speak out against the audit. There has to be a line in the sand,” Richer said in the ad, produced by the group Republicans for Voting Rights. It said the ad is scheduled to run on conservative news outlets and during this weekend’s Arizona Cardinals game.

The contractors also came in for criticism for the funding of their work, which began in April and was supposed to wrap up in May. The GOP-led state Senate approved $150,000 of state money for the audit, but Cyber Ninjas reported raising at least $5.7 million in private donations, most of which came from conservative groups.

Democrats saw the participation of conservative groups raised suspicions about the independence of the report. Sen. Kyrsten Sinema, D-Ariz, said it “has been deeply troubling to see state leaders wasting time and taxpayer money sowing doubt about the election when no credible evidence of irregularities exists.”

Despite the criticism, Republican leaders insisted their goal is to strengthen democracy.

“The goal here is election integrity and making sure our citizens have faith in the processes,” Peterson said.

PrevPreviousHOLY COW! HISTORY: The Man Who Conned the Confederacy
NextUpdated: Gosar Demands Answers Regarding Under Reporting of COVID-19 Vaccine DataNext

1 thought on “Maricopa election probe is complete, but fight may just be starting”