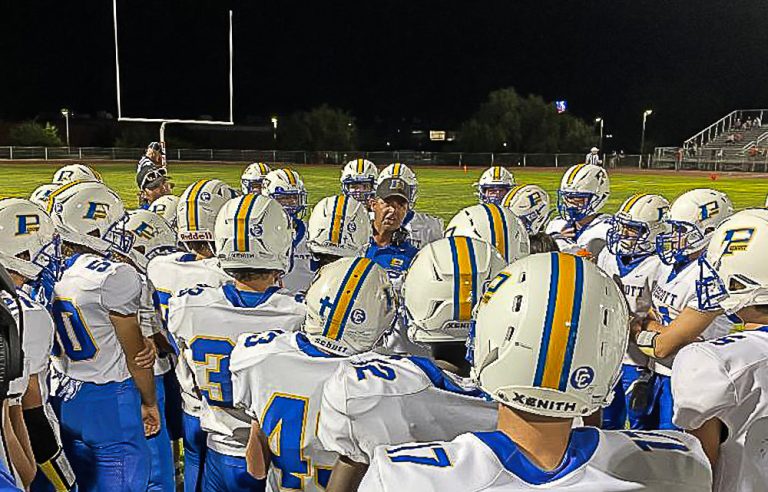 Photo: Coach Johnson talks to the Badgers in the first half at Lee Williams. (Courtesy)

For the third year in a row, the Badgers made the trip to Kingman to face the Lee Williams Volunteers.  Coach Branden Johnson, filling in for Coach Collett, and his coaching staff had to work extra hard to get past the upstart Volunteers, who knocked off the Badgers 31-15 last season. This year, the Badgers held on to win 20-19 to remain undefeated on the season.

It was a slow beginning for Prescott as the Badgers went three and out to start the game, and a poor punt gave the Volunteers a short field. Lee Williams took advantage of that, starting at the Badger 38, and on their second offensive play, quarterback Devean Santos scampered 26 yards for the touchdown.

A turnover late in the first quarter jumped started the Badger offense. Lee Williams’ Jimmy Berry fumble and Cian Mckelvey recovered the loose ball at the Volunteers 40. The Badgers needed just two plays to get the equalizer, when quarterback Alex Vaughan threw a clean pass to Jake Hilton to the Lee Williams 8. McKelvey followed that with an 8 yard touchdown run, his second TD of the season. Cole Gross added the extra point to knot the game at 7.

The Volunteers came right back, when Santos faked a run into the line, halting  just in time to pass the ball to Berry for a 25 yard gain to the Badger 40, as the quarter came to an end.

Two plays later, Berry atoned for his fumble on a 22 yard touchdown run. On the PAT, the kick was blocked by Alex Vaughan to keep the deficit at six, 13-7, with 11:24 left in the second quarter.

A pair of turnovers followed, first when Cody Hanna picked off a Santos pass at the Lee Williams 22. Three plays later, Devin White picked off an Alex Vaughan pass near midfield, Whites third pick of the season.

Santos and Berry took turns running the ball, setting up a play through the air. Santos hit White in stride down the near sideline for 26 yard touchdown pass. Once again the kick was blocked, leaving the Volunteers up 19-7, midway through the second quarter.

The Badgers, down by two scores needed a boost and got it right away when Leopold ran up the middle for 42 yards to the Lee Williams 38, but Prescott was unable to do anything further. The Badgers punted and the ball was down at the Lee Williams 7.

A bad snap over the punter’s head went into the end zone, and Prescott picked up two points on the safety, to trim the deficit to 19-9, with just over a minute in the first half. The Badgers were not through yet.

Cole Gross finished off the first half on a high note, as the junior kicker drilled a 42 yard field goal, after Lee Williams called a timeout that failed to ice the kicker. Prescott now trailed 19-12.

Prescott took the ball and moved it to the Lee Williams 23. Despite two big plays, one a 37 yard run by Cody Leopold, and a 22 yard run by Jake Hilton, to the Volunteers 26, the drive stalled.

The fourth quarter saw the Badgers offense roll the dice on fourth down at the Lee Williams 33, but came up a yard short with 10:37 left in the game.

The Volunteers used a mix of running and passing plays to move the ball into Badger territory, while burning some clock. The Badger “D” once again stopped Lee Williams at the Prescott 39 with 5:22 left in the game.

On the second play of the drive, Alex Vaughan hit Lance Aurich in stride on a post pattern for a 55 yard touchdown. The Badgers decide to roll the dice and go for two, successively doing so on a run off the left tackle by Cody Leopold, giving the visitors a 20-19 lead with 5:12 remaining.

Lee Williams moved the ball down the field, getting their kicker in position to take the lead, but back to back penalties made it a 48 yard attempt. Justin Wright had plenty of leg, but hooked the kick.

Prescott got the ball back but went for a long pass play to Jake Hilton. The pass was picked off after Hilton got blasted, going down as the pass went by and into the defenders hands.

The Volunteers once again moved the ball into Prescott territory, down to the 38, but a huge sack by Patrick Willoughby pushed the ball back to the Badger 45. On fourth down, three Badgers, Cian Mckelvey, Desmond Bennett, and Willoughby teamed up to bring down Santos to end the threat.

Receiving, Jake Hilton had 3 catches for 44 yards, and Landen Aurich had the one big TD catch that went 55 yards.

The Badgers come home with a perfect (4-0) record, and start (1-0) in the Grand Canyon Region. Lee Williams suffers the homecoming loss, and drops to (2-2) and (0-1). Prescott will host Blue Ridge next Thursday at 7 pm.

Girls varsity volleyball continued their hot streak, improving to (3-2) in the Grand Canyon Region and (6-3) overall with 3-1 win over the Mingus Marauders, to record their 5th consecutive win.

Solid defensive led to efficient offense, with Prescott racking up quick scores again and again throughout the night. Ella Bleu Edwards spread the ball around, racking up 18 assists as Millie Diener topped the kills list with 9, followed by Reagan Grey with 8.

Prescott moved into 3rd place in the region, positioning themselves to make a run to the State Tournament by continuing their current hot streak.

The Badgers will host Thunderbird on Monday at 6 pm.

Prescott won 9-0  over a very tough Horizon team and are now (8-0) on the season. It was the seventh sweep in eight contests this season for the Badgers.

Coach Bobbi Yoder said, “ I am super proud of my girls for being focused, working hard and battling it out tonight to come out with a big win. Great job ladies!”

Next up, the Badgers will host Saguaro  on Tuesday  at 4 pm.