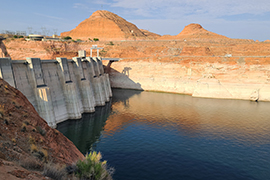 The Bureau of Reclamation report released Thursday shows an 88% chance that Lake Powell could fall below 3,525 feet by next August, a level that would endanger hydropower production, with chances Lake Mead will hit critical levels in the next few years.

The five-year projection is grimmer than estimates released just two months ago, and shows that a drought contingency plan triggered earlier this year by low reservoir levels, while it was aggressive, may not be enough, one official said.

“We need to take more actions in both Lake Powell and Lake Mead,” said Thomas Buschatzke, director of the Arizona Department of Water Resources. “More actions mean finding a way to get people to conserve their water, or more mandatory reductions to stabilize the lake.”

That was echoed Thursday by Sarah Porter, director of the Kyl Center for Water Policy as Arizona State University’s Morrison Institute.

The Bureau of Reclamation report estimates river levels in the lower Colorado River basin over the next five years, particularly the levels needed for the two main reservoirs in the basin to keep functioning – 3,525 feet above sea level in Lake Powell and 1,025 feet in Lake Mead.

Both estimates are several percentage points grimmer than a five-year forecast released in June, when analysts included water releases that were expected from upper basin dams would help the downriver reservoirs. Because those releases are still being worked out, they were removed from the latest forecast.

That makes sense, said Porter, who said planners could no longer assume water would “magically appear” from upriver, which had low precipitation this year, in a region going through a decades-long drought.

“When you’re in a prolonged drought, you have to get real and say let’s get rid of that part of the model … because we shouldn’t be betting on wet years,” she said.

The immediate threat is to Lake Powell and its ability to generate hydropower. Thomas Meixner, the head of the University of Arizona’s Department of Hydrology and Atmospheric Sciences, said that poses the risk of “dead pool, no power generation and the ability to meet users’ request and demands.”

That was echoed by Buschatzke, who said the “critical elevations of Lake Powell are more, at this point at least, about power production,”

A two-year projection of water levels by the Bureau of Reclamation shows the “potential for going below the 3,525-foot elevation, and in 2023 it’s worse” for Lake Powell, Buschatzke said. “There are several months in 2023 where it falls below the elevation of 3,490 feet.”

But in the short term, at least, more water will be coming from upstream.

“Between July and December, 181 acre-feet of water is being moved out of the upper basin reservoir above Lake Powell, into Lake Powell,” Buschatzke said. “The reason for that is to protect the ability to generate power.”

But the longer-term solution could require more sacrifice by users in Arizona and other state in the lower basin.

Farmers in central Arizona are already slated to give up some of their Colorado River water rights starting next year, under the first phase of the drought contingency plan that was triggered by this year’s low water levels.

Porter noted that agriculture is the biggest user of Colorado River water, with municipal users accounting for only 11% of consumption. She said cities are already doing a good job at water conservation, despite booming growth in the state, but that cuts could eventually reach them.

“We could be seeing cuts to users who have higher priority on the Colorado system,” Porter said. “In the coming years we could get to the point where cities begin to have cutbacks.”

Buschatzke said one option would be to use a drought mitigation fund authorized by the state Legislature that he could use as an incentive, paying entities to reduce their water use.

“What we will be looking at doing is going to stakeholders who have water rights to Colorado River water, and to see if they will voluntarily reduce their use so that water can be kept in the lake,” he said. “Voluntarily could include paying them.”