EXPLAINER: Why the debt limit is again roiling Washington 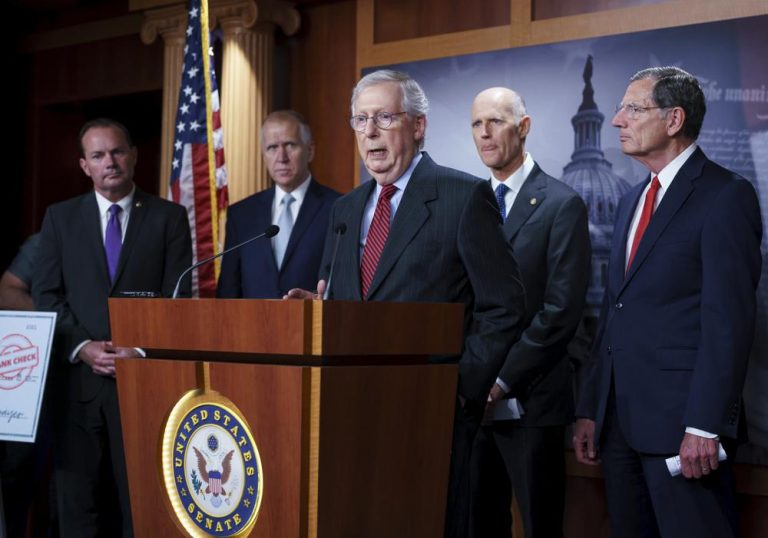 The idea of the U.S. government breaching its “debt limit” sounds scary. But what, exactly, are lawmakers in Washington fighting about?

The debt limit is a nearly century-old artificial cap that Congress placed on the U.S. government’s ability to borrow. Lawmakers have raised or suspended it nearly 80 times since 1960, but there is a deepening partisan standoff this time, underscoring how the debt limit has evolved into a political weapon.

House Democrats voted Tuesday to suspend the debt limit through the end of 2022. That proposal is likely to meet fierce resistance in the evenly-split Senate, where Republican lawmakers say President Joe Biden and the Democrats in power should go it alone as they also try to move on a multitrillion-dollar package of tax increases on the wealthy and new spending on children, health care, infrastructure and the environment.

The Biden administration insists on bipartisanship on the issue.

“It is not a partisan issue to want to protect the full faith and credit of the United States,” White House press secretary Jen Psaki said Wednesday aboard Air Force One.

The issue is time-sensitive because the extraordinary measures used by the Treasury Department to keep the government running would be exhausted in October. If Congress fails to act, it creates the possibility of a default that could send financial markets crashing and the economy plunging into a recession. The House-passed bill also ties the suspension to a measure that would continue to fund the federal government through Dec. 3.

Republicans, despite their refusal to help, agree with Democrats that a default must be avoided.

“America must never default — we never have and we never will,” Senate Republican Leader Mitch McConnell declared Wednesday as he then voiced his opposition to a bipartisan increase.

Here is an explainer on the problem:

WHY IS THERE A DEBT LIMIT?

Before World War I, Congress needed to approve each bond issuance. The debt limit was created as a workaround to finance the war effort without needing a constant series of votes.

Since then, a tool created to make it easier for the government to function has become a source of dysfunction, stoking partisan warfare and creating economic risk as the debt has increased in size over the past 20 years.

The Congressional Budget Office estimates that annual budget deficits of $1 trillion or more will be routine for the next decade, so the issue will be recurring. The debt rose in large part to fund the recoveries from the Great Recession and the coronavirus pandemic. The imbalance over the coming years increasingly reflects government expenses for programs such as Medicare and Social Security that are outstripping tax revenues.

HOW BIG IS THE DEBT LIMIT?

The cap is now $28.4 trillion. During the Trump administration, the debt limit was suspended three times. The last suspension — passed on a bipartisan basis in 2019, when the debt stood at $22 trillion — ended in July.

The Treasury Department has since been engaging in what it calls extraordinary measures to keep the government operating.

The $28.4 trillion debt is bigger than the yearly U.S. gross domestic product. The Biden administration and congressional Democrats say the next debt limit suspension should be bipartisan because it applies to previous spending approved by the government. It’s akin to paying a credit card bill, and a signal to the financial markets that the United States will be fiscally responsible.

Estimates from Moody’s Analytics say that a potential recession from government cuts if the cap stays in place could lead to 6 million job losses and stock market declines that could eliminate $15 trillion of household wealth.

WHY DO REPUBLICANS OPPOSE AN INCREASE?

Put simply, they’re out of power and they dislike Biden’s policy agenda.

While the administration notes that the debt ceiling reflects prior spending choices, McConnell and the Republicans are linking any increase to Biden’s multitrillion-dollar plans to raise taxes on the wealthy and corporations in order to fund programs and tax breaks that could aid the middle class. McConnell has said the tax hikes would ultimately hurt the middle class and lead to a “socialist” transformation of the country.

“Democrats control the Senate, the House, and the White House,” McConnell said Wednesday. “If they want to ram through another reckless taxing and spending spree that hurts working families and helps China without any Republican input, they will need to raise the debt limit on their own.”

WHO IS TO BLAME FOR THE RISING DEBT?

The debt limit was suspended three times under Trump, who used debt to fund his 2017 tax cuts and then needed to borrow even more when the economy tanked last year with COVID-19. Both Biden and Obama took office amid weakened economies and passed ambitious aid packages that required the government to borrow more.

Investors enabled Congress to run higher deficits because low interest rates made it easier to fund the government through debt. Interest rates on 10-year U.S. Treasury notes are lower now than in fiscal 2001, when the government last ran an annual surplus.

Polling by the Pew Research Center suggests voters became less concerned about the debt as the pandemic raged. Just 47% last year said the deficit was a “very big problem,” down from 55% in 2018.

WHY NOT JUST GET RID OF THE LIMIT?

One easy fix would be to completely repeal the debt limit so that it can no longer be used as leverage in congressional fights.

That step would allow the spending and taxes approved by Congress and the president to determine how much debt the government issues, instead of a legally binding but otherwise superfluous cap. A Biden administration official, insisting on anonymity to discuss private conversations, said the White House would only weigh in on the elimination if Congress showed there was support for the idea.

There is some bipartisan backing among those who have previously dealt with this challenge. Harvard University professor Jason Furman, formerly the top economist in Obama’s White House, and Rohit Kumar, a former aide to McConnell, advocated for removing the cap in a 2017 Wall Street Journal op-ed.

PrevPreviousAs Texas draws its maps, Latinos push for political power
NextMany migrants staying in US even as expulsion flights riseNext