As Texas draws its maps, Latinos push for political power 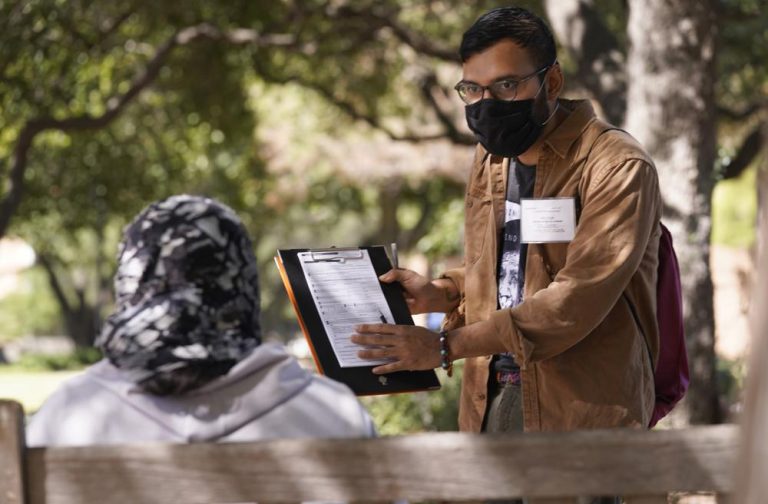 As a Dallas County commissioner, Elba Garcia represents some 670,000 people — nearly the population of a congressional district. The majority of her constituents are Latino and live in the fast-growing suburbs west of Dallas, where they share worries about managing growth, schools and access to health care.

Garcia is the area’s voice on the commission, but her constituents don’t have such neat representation in Congress. The area is divvied up among three House members, according to boundaries drawn by Republican legislators 10 years ago. None is Latino.

Garcia says the impact of the divisions is clear: “Everyone gets cut up and scattered around,” she said. “They dilute the Latino vote.”

Texas this week will begin redrawing those congressional lines, and Latino advocates and officeholders say it’s time to correct past wrongs. The state’s explosive population growth over the past decade — half of which comes from Latinos — has earned it two new congressional seats. At least one should be a Latino-majority congressional seat in the Dallas area, they argue.

The push is part of a national campaign ramping up as states dive into a once-a-decade redistricting fight that could determine control of the House of Representatives. Although the battle is expected to be sharpest in Texas, Latino advocacy groups are already fanning out across the country, working in Arizona, Colorado and Texas with one clear message: Latinos accounted for slightly more than half of all U.S. population growth in the last decade, and it’s time for the political system to pay attention.

While Latinos don’t vote as a monolith, they lean heavily toward Democrats in Texas and across the country. Advocates argue that district lines shouldn’t blunt their power.

“Ultimately, it’s about providing Latinos a fair opportunity to choose their representatives,” said Dorian Caal of the National Association of Latino Elected Officials. “We’re all better off when a community can choose someone they prefer.”

But the tactic of “packing and cracking” racial and ethnic groups has a long history. In every decade since the passage of the Voting Rights Act in 1965, courts or the Department of Justice have ruled that Texas’ redistricting plans violated federal laws — partly by scattering Democratic-leaning Latino voters among multiple districts dominated by non-Latino white residents who lean Republican.

This year there will be less federal oversight. For the first time in decades, the state does not need approval from the Department of Justice before enacting its plans, because of a 2013 decision by the conservative-majority U.S. Supreme Court.

Using census data released last month, advocates say they see a handful of places ripe for new Latino-majority congressional districts. In Florida, which is adding a new seat, some are pushing for a new district south of Orlando, where an influx of Puerto Ricans has led to a population boom.

In Colorado, another fast-growing state gaining a seat, some advocates see a way to draw a majority-Latino district in the state’s urban heart, but only by splitting Denver in half and merging it with various close-in suburbs. The initial drafts of maps drawn by a nonpartisan commission kept Denver in the same district.

Then there’s Texas, home to more Latinos than any other state besides California. Republicans repeatedly have used partisan gerrymandering — drawing districts to favor the party in power — to cement control of the state legislature and seats in Congress.

The lines have helped the GOP-controlled legislature enact an ambitious conservative agenda, even as the electorate becomes more Democratic. And those lawmakers have shown a willingness to test how far they can go without the “pre-clearance” requirement of the Voting Rights Act. Earlier this month, they passed broad legislation erecting new barriers to voting, over objections from civil rights groups and Democrats in the minority.

“They’re afraid of losing their power,” said Lydia Camarillo, whose Texas Redistricting Task Force was one of the groups that sued Texas to block their 2011 redistricting plan on the basis of racial discrimination.

Texas Republicans insist they are trying to be fair. “This process is under a microscope for both potential litigation as well as making sure that we have effective representation,” said state Rep. Jim Murphy, chair of the Texas House Republican Caucus, adding that he wants to make sure “every community is represented.”

There are many political crosscurrents at play. The state’s growth is concentrated in diverse, urban and suburban areas that are turning against Republicans, pressuring the GOP to use redistricting to shore up its own districts.

At the same time, the party performed relatively well with Latino voters during last year’s presidential election. Former President Donald Trump won 37% of Latinos in Texas, while President Joe Biden was backed by 62%, similar to the national split, according to AP VoteCast, a survey of the electorate. Trump was helped by strong support in the heavily Latino counties in the Rio Grande Valley in southern Texas.

National Republicans have mused about creating a new majority-Latino congressional district in that part of the state, one that would likely lean Republican. The area currently is split into three majority-Latino seats, all represented by Latino Democrats.

Some Latino advocates are expecting more success on the local level. It may be easier to draw a bevy of new local and statehouse districts that are dominated by Latino voters, said Thomas Saenz, president and general counsel of the Mexican American Legal Defense and Educational Fund.

It isn’t always Republicans standing in the way, Saenz notes. In Illinois, for example, Democrats have proposed a map that would redraw the boundaries of a majority-Latino state Senate seat in the Chicago area to protect the white incumbent.

Redistricting isn’t the only factor diluting Latinos’ political power. Nearly 70% of Latinos live in just five states — California, Florida, New Jersey, New York and Texas. About half of Latinos are ineligible to vote because they are not citizens or are under age 18. With 1 in 4 children in the country Latino, that’s a large share of the population that can’t mark a ballot — yet.

Rep. Ruben Gallego, an Arizona Democrat who chairs a group trying to elect more Latino Democrats, says there’s a benefit to Hispanic communities being able to select representatives who have similar life experiences, such as living in multigenerational households during the pandemic. “Sometimes the only people who think about those issues are Latino politicians who represent those districts,” Gallego said.

In Dallas, Cristina Garrido, an organizer for the Latino group Jolt Action, says that when she talks to young Hispanic people in her community, she often runs into cynicism and apathy, a sense that “whatever happens is going to happen and they don’t actually have a voice.”

She worries that lawmakers’ redistricting work will make it worse.

“The danger is if we see some negative consequences with the redistricting, that people are just going to feel more and more disenfranchised and just not encouraged to vote,” Garrido said.