Mexico buses, flies Haitians from remote area on US border 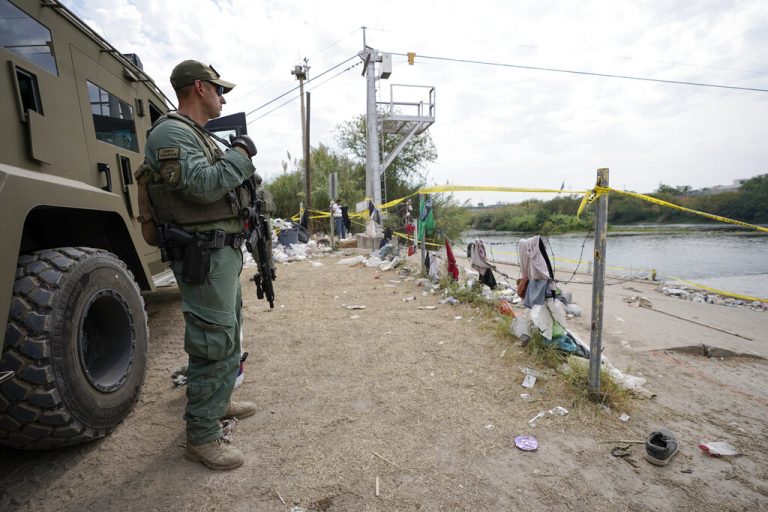 Photo: A Texas Department of Safety official stands near an armor vehicle along the Rio Grande, Tuesday, Sept. 21, 2021, in Del Rio, Texas.

Mexico has begun busing and flying Haitian migrants away from the U.S. border, authorities said Tuesday, signaling a new level of support for the United States as a giant refugee camp in a small Texas border town presented President Joe Biden with a humanitarian and increasingly political challenge.

Mexico has helped at key moments before. It intensified patrols to stop unaccompanied Central American children from reaching the Texas border in 2014, allowed tens of thousands of asylum-seekers to wait in Mexico for hearings in U.S. immigration courts in 2019 and, just last month, began deporting Central American migrants to Guatemala after the Biden administration flew them to southern Mexico.

Marcelo Ebrard, Mexico’s foreign relations secretary, said Tuesday he had spoken with his U.S. counterpart, Secretary of State Antony Blinken, about the Haitians’ situation. Ebrard said most of the Haitians already had refugee status in Chile or Brazil and weren’t seeking it in Mexico.

“What they are asking for is to be allowed to pass freely through Mexico to the United States,” Ebrard said.

Two Mexican federal officials, who requested anonymity because they were not authorized to speak publicly, confirmed Mexico’s actions.

One of the officials said three busloads of migrants left Acuña on Tuesday morning for Piedras Negras, about 55 miles (90 kilometers) down the border, where they boarded a flight to the southern city of Villahermosa in the state of Tabasco.

The other official said there was a flight Monday from the northern city of Monterrey to the southern city of Tapachula near the Guatemala border. Tapachula is home to the largest immigrant detention center in Latin America. The flight carried about 100 migrants who had been picked up around the bus station in Monterrey, a hub for various routes north to the U.S. border.

The second official said the plan was to move to Tapachula all Haitians who had already solicited asylum in Mexico, since Tapachula is where most of them would have applied and they can only legally remain in Mexico while their case is processed if they stay in the south.

The Haitian migrants who are already in Mexico’s detention centers and have not requested asylum will be the first to be flown directly to Haiti once Mexico begins those flights, according to the official.

Around Ciudad Acuña, Mexican authorities were stepping up efforts to move migrants away from the border. There were detentions overnight by immigration agents and raids on hotels known to house migrants.

“All of a sudden they knocked on the door and (yelled) ‘immigration,’ ‘police,’ as if they were looking for drug traffickers,” said Freddy Registre, a 37-year-old Venezuelan staying at one hotel with his Haitian wife, Vedette Dollard. The couple was surprised at midnight.

Authorities took four people plus others who were outside the hotel, he said. “They took our telephones to investigate and took us to the immigration offices, took our photos,” Registre said. They were held overnight but finally were given their phones back and released. Authorities gave them two options: leave Mexico or return to Tapachula.

On Tuesday afternoon, they decided to leave town. They bought tickets for a bus ride to the Gulf coast state of Veracruz, planning to continue to Tapachula where they had already applied for asylum.

Others left without being told. Small groups arrived at Ciudad Acuña’s bus station Tuesday to buy tickets to Veracruz, Monterrey and Mexico City. The same bus lines prohibited from selling them tickets for rides north through Mexico, sold them tickets to head south without issue.

In Haiti, dozens of migrants upset about being deported from the U.S. tried to rush back into a plane that landed Tuesday afternoon in Port-au-Prince as they yelled at authorities. A security guard closed the plane door in time as some deportees began throwing rocks and shoes at the plane. Several of them lost their belongings in the scuffle as police arrived. The group was disembarking from one of three flights scheduled for the day.

The White House is facing sharp bipartisan condemnation for its handling of the influx. Republicans say the Haitian migrants believed Biden administration immigration policy encouraged their belief that they would receive asylum. Democrats are expressing outrage after images went viral this week of U.S. Border Patrol agents on horseback using aggressive tactics against the migrants.

Republican Texas Gov. Greg Abbott, during a visit Tuesday to the encampment in Del Rio, Texas, said the county’s top official told him the most recent tally was about 8,600 migrants who remain there. He continued to slam the Biden administration and expressed skepticism the area would be cleared soon.

“They have shown no capability of being able to process all of these migrants by the end of the week,” Abbott said. “The only thing they have shown is an incapability of dealing with this crisis, candidly in a way where they pretend it doesn’t even exist. We’re here to tell you, it exists, it’s total chaos, and the Biden administration, they need to up their game big time.”

About six dozen officers with the U.S. Bureau of Prisons were in place Tuesday near Del Rio, according to three people familiar with the matter. The officers are mainly assisting U.S. Customs and Border Protection with transporting the migrants on Bureau of Prisons buses between detention facilities and from the Del Rio bridge, the people said. The people could not discuss the matter publicly and spoke to the AP on condition of anonymity.

The rapid expulsions were made possible by a pandemic-related authority adopted by former President Donald Trump in March 2020 that allows for migrants to be immediately removed from the country without an opportunity to seek asylum. President Joe Biden exempted unaccompanied children from the order but let the rest stand.

Any Haitians not expelled are subject to immigration laws, which include rights to seek asylum and other forms of humanitarian protection. Families are quickly released in the U.S. because the government cannot generally hold children.

Beside the Rio Grande in Ciudad Acuña Tuesday, Manocheka Casimir and her husband prepared to carry their 2-year-old son back to Texas. They brought him to see a doctor, who was among the humanitarian organizations offering services, because he complained of a stomach ache.

They knew deportations were happening in the U.S. and detentions were occurring in Mexico. But after four years in Chile followed by two months traveling to reach Ciudad Acuña, their relatives in California recommended they wait for their opportunity in Texas.

“This time, at least, we are at the border,” Casimir said. Since arriving in Mexico, the family had already been sent back to the southern city of Tapachula twice after being taken off buses.

Maria A. Verza and Juan A. Lozano | Associated Press