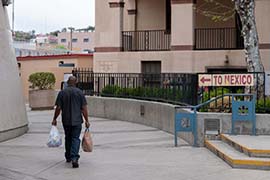 The ban on nonessential travel on land crossings between the U.S. and Mexico will be extended another month, a “disheartening” development for border towns and businesses that have already had to cope with the travel limitation for 18 months.

“It’s very disheartening to have it extended again,” Douglas Mayor Donald C. Huish said Monday. “Our economy is suffering due to that, we estimate approximately two thirds of our sales tax revenue comes from … our neighbors to the south. So, it’s a very big blow.”

The ban on nonessential travel was first imposed in March 2020 in an effort to stem the spread of COVID-19 and has been regularly since then, most recently as the delta variant of the virus led to a spike in new cases. The latest extension was set to expire at midnight Sept. 21, but the White House said Monday that it would be continued through at least Oct. 21.

That announcement came the same day that the Biden administration said it planned to ease COVID-19 related limits on international air travel beginning in early November.

The plan also calls on the Centers for Disease Control and Prevention to issue a contract tracing order that will require airlines to collect contact information that can be used in case anyone is exposed to COVID-19 during their travel.

In a briefing Monday afternoon, White House spokesperson Jen Psaki said there are “no updates or predictions at this point” on when the restriction on nonessential travel at land borders might be lifted.

“But obviously, we’re continuing to consider … how we can return to a place of travel and people being able to move from country to country, including our land borders,” Psaki said.

One expert called the continued closure of the land border – now extended to at least 19 months – “ridiculous.”

“You can fly into the United States from Mexico City, with proof of a COVID-19 vaccination or a test and you’re allowed to travel,” said Andy Carey, the executive director of the U.S. Mexico Border Philanthropy Partnership. He said people should be allowed to do the same thing at the land ports of entry.

Huish said that the restrictions do not just affect cities at the border, but cities well inside Arizona, too. Huish said that on a typical weekend at a mall in Tucson, 66 miles north of Nogales, about half of the license plates would be Mexico, but “now, maybe 10%.”

He said he has written to the Biden administration, urging it to “reconsider lifting the restrictions,” and was hopeful they would be lifted in July when large numbers of people were getting vaccinated. But the ban was extended to August, and then to September and now until October – at least.

Huish said the restrictions have been tough on everyone, but that local mom-and-pop shops have been the most affected. They are struggling to survive, he said, and not all have made it.

“Many have had to shut their doors, many of them have … tried to survive by shortening their hours, laying off employees and the owners are having to spend more time down there as employees,” Huish said.

He just wishes someone from the Biden administration would come to see the issue in person.

“It’s a beautiful place, it’s a great place of opportunity,” Huish said. “We just want people to see it and allow it to happen.”

PrevPreviousOpinion: The Manufactured Border Crisis
NextOpinion: What Did Nixon Do 50 Years Ago that Still Haunts Us Today? It’s Not WatergateNext